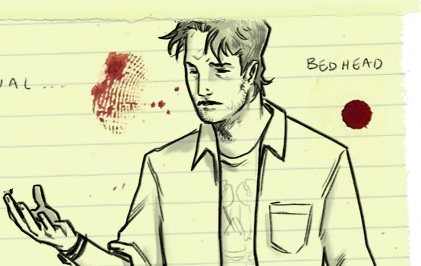 Sometimes a creator just gets tired of fighting. For Shane “Books” Bookman, it’s not so much tiring as time to let someone else tell his story for a while, and so Kevin Eastman, David Avallone, and Ben Bishop have been given permission to turn a comics artist’s life into… comics art.

Announced at Comic-Con, Drawing Blood will spend a little time going over the past of Bookman’s rags-to-riches story — indie creator hits at just the right time to ride a huge boom in comics, sells his interest so as to stay true to his art, and… well, you may have read about it before, but never in a 112-page graphic novel that puts a spin on where he is now.

Recently, it was announced that he would be “advising” on superstar director Morgan Harbor’s take on Bookman’s co-creation with his estranged brother Paul Bookman, the Radically Rearranged Ronin Ragdolls. A respectful approach has been promised, but we’ve heard that sort of thing before. Time — and Drawing Blood — will tell. 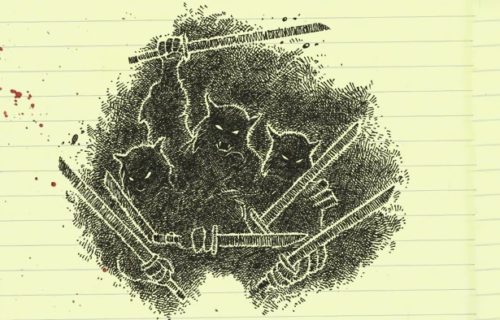 I ran into Bookman in San Diego, Avallone vouched for me, and after a couple of false starts (he had been scheduled to join the podcast last week, which would have been a nice coup), Bookman sat down for an interview. Not so much reclusive as camera shy, I’ve chosen to illustrate this interview with some of Bishop’s panels from Drawing Blood. He told me he would appreciate that.

Derek McCaw: Thanks to the success of Radically Rearranged Ronin Ragdolls, you’re like Cinderella meets the American Dream. At least, that’s the way most people want to think of the story. Was there ever a specific moment you felt like you’d made it?

Shane Bookman: Cinderella meets the American Dream meets Pink Floyd: The Wall, maybe? My ambitions were small. I felt like I made it back in ’92, when comic shops called us to ask where Ragdolls #2 was, and when they could expect it. We were blown away. We thought it was some nutty one-shot thing, a joke on Eastman and Laird and Miller and Kirby and anime and Hello Kitty. When they asked for issue two… that was the magic. The rest has been a roller coaster. A scary one. Like the Cyclone at Coney.

Derek McCaw: Why DID you sell the Ragdolls?

Shane Bookman: That’s a long question but I’ll give you the short answer. I wanted to create a perfect magical oasis for comic book creators. I called it Siberian Arts, I hired one of my heroes to run it, and it was the Apple Records of comics. Problem was no one reminded me how Apple Records worked out. 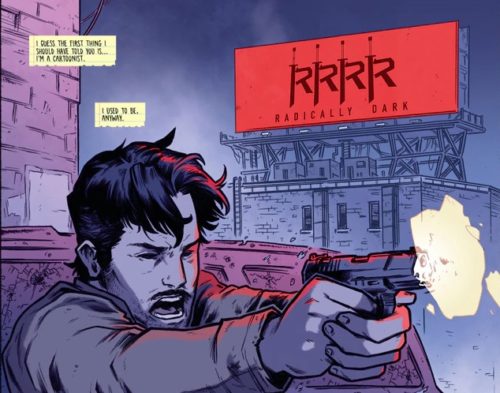 Derek McCaw: How is it working with Morgan Harbor? He’s a director with a very specific vision, and here you come in saying, “no, THIS is how it works?”

Shane Bookman: Simple. You don’t say “no.” Like you never, ever, say no. But sometimes I do say “what if?” That goes down better.

Derek McCaw: For this movie, which could mark a major resurgence, has Paul reached out to you at all, or are both of you involved in the R4 movie?

Shane Bookman: I reached out to Paul, and he politely declined to participate. He’s happy where he is, I guess.

Derek McCaw: I know it’s painful, but you are talking about it in Drawing Blood, let’s talk about Siberian Arts. What was the best part about working with Frank Forrest?

Shane Bookman: They say “never meet your heroes,” we’ve all heard that. I met Frank at a Con in the eighties when I was a kid, and he was… he was tough. Uncompromising. No bullshit with Frank. I appreciated that, even if it wasn’t always easy. In comics he was a genius. In business… maybe not so much. But he was a great man and I miss him. I wish I’d known he was in so much pain. 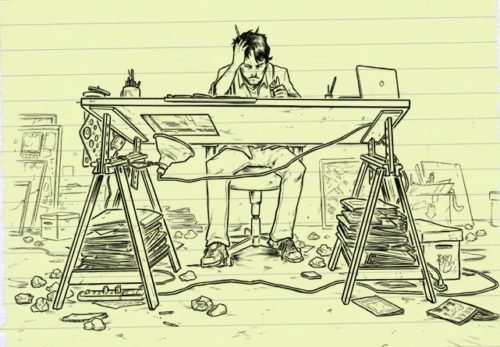 Derek McCaw: In all this, you’re also trying your hand at producing a Broadway show, a new musical of Fritz Lang’s Metropolis. What is it about the property that made you think, yeah, there’s a musical there?

Shane Bookman: Silent film can be very emotional. I knew the visuals would translate, and I knew that the big emotions and big ideas could make great songs.

Derek McCaw: And then, what made you think, “I’m the guy to make it happen?”

Shane Bookman: That’s a good question. Maybe I’m not? But I hired Glasgone to write the songs, and they’re coming up with great stuff. I guess the answer is I love the movie, the story, enough to convey some of that passion to the audience. Let’s hope that’s what it is.

Derek McCaw: There have been a lot of ups and downs and opportunities to tell your story. Why now, with Eastman and Avallone?

Shane Bookman: Avallone was introduced to me in the lobby bar of the Emerald City Comic Con hotel. (Neither of us remember the name of the hotel. I guess we were drunk.) He’s a funny guy, he told me Eastman was a fan of my stuff… which surprised me. They’re kind of like Mutt and Jeff but they have a solid partnership and I think they really know where I’m coming from. We’ve all been on that roller coaster, in one way or another, and it’s a bond. He put me together with Eastman, whose enthusiasm is… well, he’s like a big kid and it’s hard to say no to him.

When they offered to turn my sketches and notebooks and diaries into this… thing called DRAWING BLOOD, I thought “what do I have to lose, except what’s left of my sanity?” And Ben Bishop draws me as more handsome than I’ve ever been in my life. I dig that, for sure.

Derek McCaw: Aside from supporting it on Kickstarter, what’s the most important thing you’d want people to take away from “Drawing Blood,” your message to aspiring creators?

Shane Bookman: I should say something inspirational here, right? That’s never been my best thing, but I’ll give it a shot. I’m the living proof that you never know what’s next, for better or worse, so you might as well keep trying, keep fighting, and hope “better” comes along. Don’t let the valleys stop you, just hold onto the bar and wait for the upswing. You don’t know when it’s coming. I sure as hell didn’t, in that bar, in Seattle.

The Kickstarter for Drawing Blood launched on August 1st. You can check it out here. Shane has recently joined Twitter @ShaneBookman — he’s new to it, but slowly coming out of his shell. And of course you can follow us @fanboyplanet as well!