Fantastic Beasts 2 has had an official title change, as revealed this morning by Pottermore, the self-described “digital heart of J.K. Rowling’s Wizarding World.”  Instead of Where To Find More of Them, the second film in Rowling’s latest fantasy cycle is called Fantastic Beasts: The Crimes of Grindelwald. That makes sense, since the secret plot of the first film revolved around the machinations of a hidden Gellert Grindelwald, played by Colin Farrell but really Johnny Depp, who also both played Heath Ledger once.

Along with the new title, Pottermore released a cast photo on Twitter — which is best viewed in the tweet, as it is a magical portrait after all.

In one year, return to the Wizarding World with Fantastic Beasts: The Crimes of Grindelwald. #MagicInProgress #FantasticBeasts pic.twitter.com/8aWj8xhGj5

We knew that Jude Law was cast as a younger Albus Dumbledore; if you squint, you can see the possibility of him becoming Richard Harris. Ezra Miller returns as Credence, which may not have been known, but as he was one of the strongest parts of Fantastic Beasts and Where to Find Them, I’m glad to see his story will continue. Next to Miller is Claudia Kim, playing an unnamed character described as a “Maledictus” — someone cursed to turn into a wild beast. That’s wild, not necessarily fantastic. Suuuuure.

Zoe Kravitz had to join in, because her photo appeared in the first film, in the role of Leta LeStrange, fiance to newcomer Theseus Scamander. Newt’s brother is played by Callum Turner, and we’ll see what kind of labyrinthine plot Theseus is involved in. Just above Theseus is returning American witch Tina (Katherine Waterston) and, of course, Newt Scamander himself (Eddie Redmayne).

I’m happiest to see Dan Fogler back as Jacob — along with Credence, a character that really worked for me in the first film and largely because of Fogler’s goofy sincerity in the role. As the first film hinted, there’s still hope for romance between the nomaj baker Jacob and Queenie (Alison Sudol).

And then there’s Gellert Grindelwald — Depp. I think we’re seeing a phase to his career where he will use his scenery chewing skills to lean in to his bad reputation and become a hated (yet charismatic) screen villain. (He has a role in a similar vein in Murder on the Orient Express.) 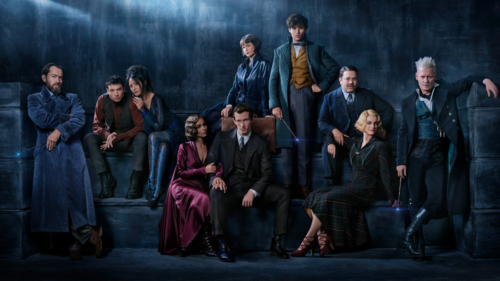 Fantastic Beasts: The Crimes of Grindelwald opens one year from today, November 16, 2018.  It’s unclear when Universal Studios will start carrying new merchandise for it, but come on — there’s got to be something in time for Christmas this year.