May we all develop the strategiconfidence of Brian Epstein. Whether he was taken with the power of the Beats or, as some would have it, breathtaken by John Lennon, he changed the world. Only most people don’t know it, because the instrument he played, as this graphic novel quotes him, was the business.

The Fifth Beatle, a graphic novel available today (November 19) from Dark Horse Comics, tackles the story of the man who truly discovered and molded the Beatles as their manager. It sheds light on a well-known and yet dimly lit figure in pop culture.

Within the first dozen or so pages, writer Vivek J. Tiwary and artists Andrew C. Robinson and Kyle Baker have made the case that Beatlemania absolutely would not have happened without Epstein, and done it so skillfully within the medium of comics that this biography works as pure entertainment.

Sure, like a biopic, some liberties may be taken, but the truth gets told through the form. A realistically drawn Epstein wanders among figures reminiscent of work from MAD Magazine issues of the sixties. It’s a choice reminding us that those lads from Liverpool were not just waiting to be sprung as bigger than life, but they now loom almost as cartoon characters, separated from who they really were and are.

But the story also shows us that few in the establishment believed in Epstein’s vision. Through montage, Tiwary and Robinson underscore that nobody (except maybe his family) ever did. 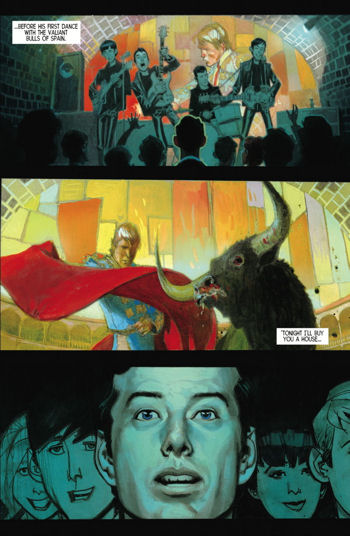 For all the pop and snap of this terrific artwork, there’s a sadness and a wonder, that everything we’ve ever read about Epstein cannot help but evoke. This was a troubled man, struggling with society’s inacceptance of his sexuality. In his own way a genius, Epstein found himself stuck on a tortured but lucrative path with many tragic sidesteps.

This graphic novel also made me feel a bit like a Beatles dilettante, not just providing a sharp portrait of the man but details that suddenly made dots connect in my head. Level One as a Beatles Zorlack is knowing that they recorded on Parlophone, but Tivary just gave me Level Three in an appropriate connection with Spike Milligan.

In all honesty, we can’t know if the Beatles truly spoke as snappily as in A Hard Day’s Night, but that fits in with the legend as well. Probably true, and again from the beginning Epstein was a dreamer already seeing the legends they would become.

Tiwary, Robinson and Baker also mix up other elements of mythology, new and old. Phrases from Beatles’ songs drop into the narrative, alongside imagery from ancient Greece and for a moment, this cultural force being more powerful than a certain locomotive — which again loomed large in the Beatles’ first film.

Yet everybody does keep getting brought down to Earth. We see John Lennon as vulnerable, playful and then quickly mean. Negotiations with Ed Sullivan take a ridiculous turn — no doubt fictionalized, but absolutely rightly so — when the book slams us into the Kennedy assassination. 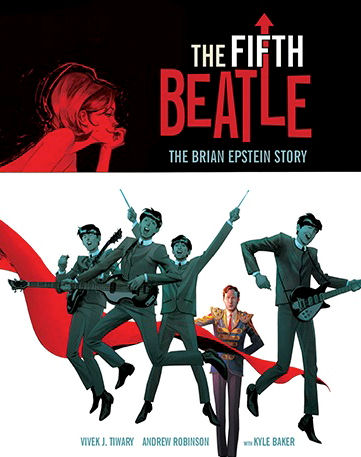 Biographical comics often feel stodgy and pedantic, hopping and skipping from milestone to milestone. But this — this is a nuanced portrait, and a wonderful use of the medium. (Plus it beats the heck out of the Marvel Comics Super Special from the seventies.)

If you have a Beatles fan in your life, get it for them. If you are one yourself, what are you waiting for? But even if you’re not, this is an absorbing and well-done read, one of those that reminds us that even ordinary men can be brought to stunning four-color life.