Doctor Who anniversary specials have a narrow line to walk. The line is operatic on one side, marking out some grand story about Time Lord past, present, or future, something with currents as deep as you want to go.

“The Three Doctors” had the story of a solar engineer who harnessed the power source for all Time Lord technology, and for his sacrifice was banished to an antimatter dimension and robbed not only of his homeworld and universe but also his physical form. “The Five Doctors” had a Time Lord scooping monsters and Doctors out of time and playing them against one another like a Roman emperor, in order for him to access the source of true immortality. Even “Silver Nemesis” (about which it’s best not to speak, and I’ll refrain from doing so outside this paragraph) tried to deepen the mystery around the Doctor himself and suggest some darker origin for him. 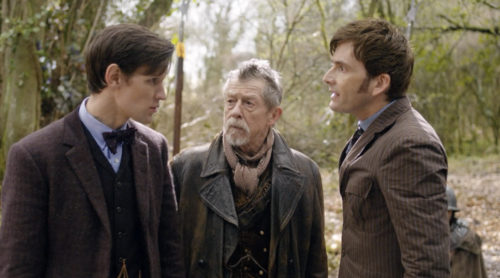 And the line is antic on the other side, because this is a celebration, and the kiddies are watching, and we can’t plumb those currents too deeply. So we don’t explore that operatic side too far, and we make sure much of the time is spent on the various Doctors bickering with one another, silly monsters in exciting battles, celebrity guest stars, and whatever else we can get away with.

As a longtime fan (I think I remember seeing “The Five Doctors” in a movie theater, and it might be a false memory but that it’s even plausible tells you how long I’ve been into this show) I should know this. And still Moffat tricked me into thinking we’d be getting, oh, maybe 80% operatic.

I felt sure this would be the story of the lost Doctor, the trials he endured, the moral dilemmas, the horrifying choices he made that caused him to reject himself, deny himself his own name. I was certain we’d see a different type of Time Lord, one who had clearly assumed a different sort of personality for a different time, one completely anathema to the Doctors we know. I figured this would be a story of coming to terms with oneself, accepting and forgiving oneself for the shame in one’s past. And then, you know, maybe 20% airlifting TARDISes, making out with Zygons, comparing sonic screwdrivers, and making fun of each other’s shoes.

Well, my percentages were off. But that’s okay.

I recently rewatched “Terror of the Zygons,” which I hadn’t seen in probably 20 years and about which I’ve read all sorts of gushing praise in the meantime, but it wasn’t that great. When you get past the shape-shifting, they’re weirdly bland aliens, mostly interested in hissing and issuing pedestrian world-conquering rants. The much-praised suckery wide-headed costume design seems tailor-made to inspire questions about how in the world they squeeze themselves down to human size (compare the Slitheen).

I’d hoped they’d be a sideline rather than a major force in the story, just a way to get us into the plot cold-open style, but I guess you don’t spend all that money recreating a classic-series monster (and “enhancing” it with pointy teeth and drool) to throw it away after ten minutes. That said, the doubling is at least a little fun, particularly in Elizabethan times, and opens the door for some pleasantly naughty jokes. 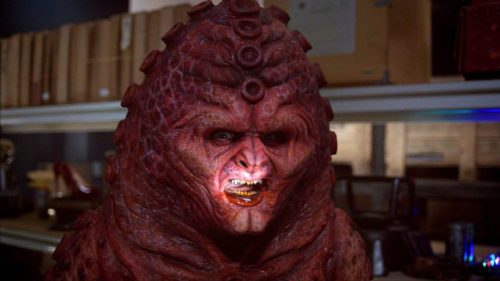 Perhaps most importantly, “The Day of the Doctor” remembers what “The Five Doctors” largely forgot, which is that the fun of a multi-Doctor story is about seeing all the Doctors together, bantering and arguing and eventually, gloriously, cooperating with himselves. The sonic screwdriver moment is a reversal on the order of “it’s smaller on the outside!” Tennant and Smith are terrific together, close enough in temperament that they seem like brothers who get on like a house on fire but still tease and make fun of each other at every opportunity. 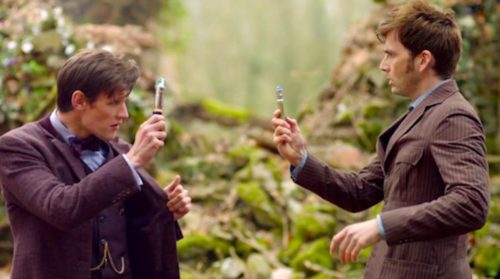 Throwing a stranger into this mix is odd; we have a past Doctor we don’t know joining in this banter and it’s hard to see him as part of the family. He’s like a long-lost relative coming home for Thanksgiving after many prodigal years, talking like he’s been around for all of them.

At times he seems to be standing in for all the classic Doctors, shaking his head at how irreverent (he chides them for pointing their sonics like weapons: “what are you going to do, assemble a cabinet at them?”) and young (“am I having a mid-life crisis?”) and fun (“is there a lot of this in the future?” he asks, meaning kissing) they are.

At others he seems like the Eccleston who theoretically would have been in his shoes if the man weren’t so obdurate, particularly when he asks “what is it that makes you two so ashamed to be grown up?” 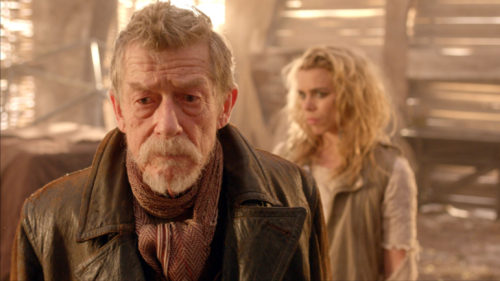 You can see the answer — grownups are the ones who push the big red buttons — in their faces, and there’s some of your operatic: it’ll skate past the kids, but it’s there if you look. As written, it’s better without Eccleston’s Doctor; he would have wiped the floor with these two goofballs, it grates to admit.

Another thing I must sadly admit is that I don’t really care for Kate Stewart. Name-checking her father does not confer on her a tenth of his charisma, and she’s at her most fun when she’s being impersonated by a Zygon.

Osgood is more appealing, presumably by design: she’s a pretty girl, “geeked” up in glasses, inhaler, and long multicolored scarf, slightly awkward but resourceful and clever and fun. I’m not sure whether she’s intended to appeal to male classic series fans who fancy a cross between Liz Shaw and Zoe Heriot (probably not) or whether she’s a nod to female new series fans who have trouble identifying with traditionally-hot companions like Rose, Martha, Amy, and Clara (no idea if that’s something anyone’s feeling), but I liked her. 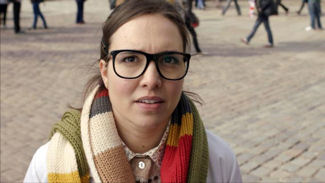 Ditto Joanna Page as Queen Elizabeth, though in her case I found myself even more confused than the characters about which was the Zygon copy and when. The comedy resulting from her relationship with the Doctor was terrific, though as I’ve said I didn’t expect it to comprise quite so much of what’s good about this special.

Which brings us back to the stuff I expected but didn’t get.

For instance, I expected at least some explanation, however sketchy, of how the Doctor and Clara got out of the Doctor’s timeline and what resulted from their encounter with his forgotten self.

I expected to see a markedly different personality in the War Doctor, something that made him seem not just old and weary but specifically battle-weary. Maybe we should have gotten a man who really had mown down more Daleks than anyone else in the Time War and had, in some version of history, been prepared to destroy every living thing on Gallifrey along with the Daleks in order to stop the War from taking the rest of the universe with it.

I expected to see how the Time Lords had become the sort of monsters who could be said, even in an offhand remark, to be almost indistinguishable from Daleks. Apart from a brief, almost unbearably stupid scene where the War Doctor requests a gun from a Gallifreyan soldier so that he can shoot the English words “NO MORE” into a wall, none of this was what I saw.

I don’t know if the plans for this special really did date back to a time (perhaps as late as this year) when Moffat and company still had some hope of getting Eccleston on board. If so, then naturally enough there would have been no story about how and why this man was different from the others, because we would already have known him.

The guilt and post-traumatic stress we remember from a Time Lord who would still have been the Ninth Doctor would have been illustrated and explained, the link with Bad Wolf (a pretty lovely way to include Billie Piper) would have made a lot of sense, and the redemption and rewriting of history at the end would feel like closure on the whole era instead of kind of an awkward rewriting of a character who was barely written in the first place.

In other words, prior to the special, the War Doctor looked like a thrilling new development in the Doctor’s history, some piece of the puzzle of his character that would give us new insight and change our understanding of him forever. Afterward, the War Doctor just looks like wallpaper over an unsightly crack. Oh well.

After all the story is done, there’s the nostalgia, and yes, the technical wizardry that allows all 13 (!!!) Doctors to make appearances in this episode is pretty special. At one point in my first viewing, I turned to my friend and said of Matt Smith, “I’m really gonna miss him,” and it’s still true.

But I can’t deny that I got an unexpected thrill from seeing Capaldi’s furious, determined eyes onscreen, and suddenly I’m with everyone else in looking forward to whatever’s next.

And then there’s the past Doctor cameo in the person of the Curator, which is so bonkers I still don’t know what to make of it. But I loved it. 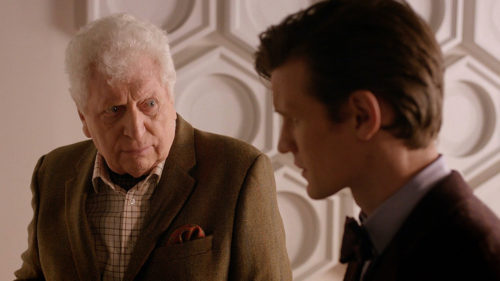 And I can’t deny I nearly teared up — which I almost never do — at two moments. The first was the Interface describing how the “wheezing, groaning” sound of the TARDIS brings hope to anyone who needs it…”even you,” she says to the War Doctor.

And even now I’m this close to losing it when I remember the way Tennant delivers the four words “Never cruel nor cowardly.” That description dates from the 70s, and we can debate whether it really still applies to the character in the 21st century, but there’s no debate that it still should. 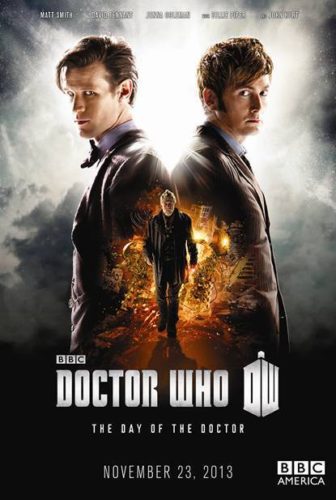