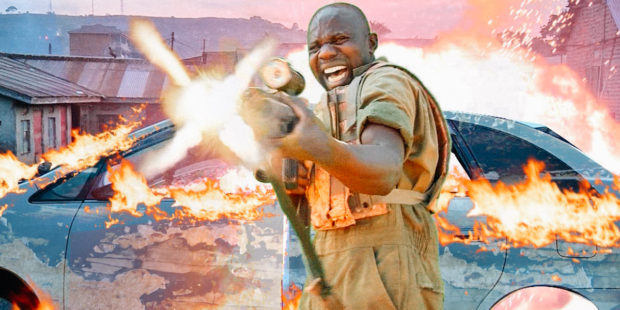 I do not know what it was like to have stumbled across Sam Raimi’s Evil Dead before everybody told you you had to see it. Everybody had already told me I had to see it. The same goes for Peter Jackson with Bad Taste; I only watched that for the first time a few weeks ago. I’d already seen Army of Darkness, Darkman, The Frighteners, Lord of the Rings, et al.

By watching Crazy World, I’ve encountered a filmmaker with passion, original vision, and a unique style inspired by his own culture, circumstance, and the influence of Western cinema, and honestly, I don’t know what to do with it except say you must watch this and decide for yourself. Here’s a voice and a passion and a sheer joy for filmmaking that must be experienced before IGG Nabwana gets swallowed by the machine and spat out jaded.

Tonight at the Toronto International Film Festival (and no, I’m not there — I was just given a screener), more people will discover this Ugandan auteur. Though Crazy World  is the third of Nabwana’s 50 (!) features to be translated into English, its placement at TIFF positions it to make the most impact. And it’s… crazy, magnificently crazy.

It’s the “BEST KIDZ MOVIE EVAH!” exclaims VJ Emmie, the “Video Joker” narrating the film (I’ll get back to that). Well, at least it features the Waka Starz, Nabwana’s kung fu master little rascals. Crazy World may or may not be part of an ongoing series involving the Waka Stars and a few other action heroes — all fighting for justice in one small Ugandan village that stands in for the corrupt wider world. (For a sample of the Waka Stars, here’s a music video.)

The plot involves child kidnapping, native superstition involving child sacrifice, and a criminal empire controlling everything. There’s no doubt these are real concerns for Nabwana and his collaborators, and yet in a crazy world, you have to laugh as well as stand up for justice. It’s horrible and real subject matter, but Crazy World still crackles with joyous energy.

Yes, joyous — and extremely low budget. It’s a satire featuring home made props, found sets (as in, this is the village, folks, and yes, this is poverty), and a solid cast that will make me angry every time I see a low budget horror film where the actors either keep an ironic distance or just plain aren’t good. Because every single actor in Crazy World cares and throws everything they have into it — you’ll believe it because they believe it.

It’s also really well shot, even if the special effects are clearly by Adobe. And don’t scoff at the thought of “kid kung fu stars,” because the fight choreography is some of the most effective I’ve seen onscreen this year.

The element that took some adjusting for me is that “Video Joker,” a unique element of Ugandan filmmaking. Part hype man, part narrator, VJ Emmie reminds the audience who characters are, offers commentary, and sometimes just expresses his own excitement at what’s happening. For Ugandan audiences, it was a necessary role when people might not be literate enough to read subtitles, and has evolved into an artform of its own. I admit it; I don’t quite get it, but it’s not a detraction. It just reminds me I’m seeing something truly new to me, and maybe an evolution.

Don’t take my word for it — dive in to Wakaliwood here and find out more for yourself.

UPDATE: I’ve been informed that the previous two English-translated films from Wakaliwood are now available on blu-ray, so… if you’re not in Toronto on September 14, buy the Supa Action here. 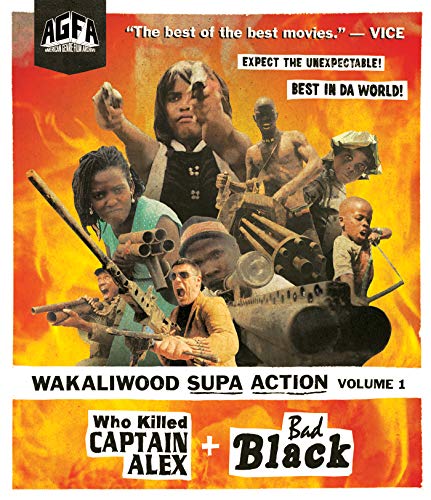