Buried amidst the hoopla for Marvel and Star Wars on Disney Plus, Disney actually has plans for several animated series for kids and adults alike — and I’m not just talking The Simpsons. The fabled Disney Afternoon will likely come back — after all, it’s just sitting there steeped in nostalgia. The revised DuckTales will have its third season on the streaming service. Both Pixar and Disney Animation will offer more experimental programming — call them animation anthologies, if you will.

Back in July, involved talent leaked that they’d been working on a series for Oswald the Lucky Rabbit. Disney themselves have not confirmed it, but if Disney CEO Bob Iger still has the sense of legacy that has marked the best of his work for the Mouse, it makes sense. According to IMDB, voice actor Eric Bauza may even play Oswald — a silent film star who has been given a voice once before (by Frank Welker) in the Epic Mickey videogames. 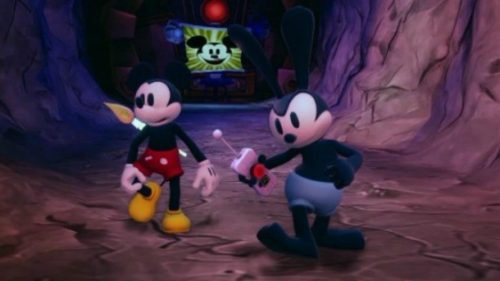 And that’s all we know. Will it be on Disney Plus on November 12 when the service starts? Does it have a launch date at all? At this point, only rumors abound, and most of them are probably just fans wishing things into existence. To be fair, that’s an unofficial Disney credo. So let me tell you a story that’s part legend, part truth, and all about why to me, Oswald the Lucky Rabbit is the most important character Disney could tout — maybe not as important as Mickey Mouse to you, but one with more personal meaning than corporate spokesmouse.

First, the legend as I knew it, sparked by Oswald appearing in Disney’s California Adventure for the first time five years ago yesterday. (He’s since disappeared again, likely due to the park’s current push for all things to be multimedia — for the moment, Oswald just isn’t cutting it.)

For the last three years of my teaching career, I had used Oswald the Lucky Rabbit in my classes as “my patron saint.” Oswald as a concept is a pretty good symbol of life knocking you down sometimes, even after you think you’ve got it pretty much figured out, and then leaving you to figure out that you actually do learn from taking risks and suffering from the occasional failure.

As legend has it, Walt Disney was fired as staff cartoonist from the Kansas City Star, because the editor thought he lacked creativity. Undaunted, he went into animation, a field that didn’t even exist twenty years before (note that for kids today — what they’re going to pursue as a career may not be a thing — yet). He had some success with the Laugh-o-Gram Studios, and created one of the most popular silent cartoon stars — Oswald the Lucky Rabbit.

He didn’t read the fine print in his contract. Walt didn’t actually own Oswald. When Walt went to his distributor asking for more money to create more cartoons, it turned out that most of his staff had been hired away to continue making Oswald without Disney. 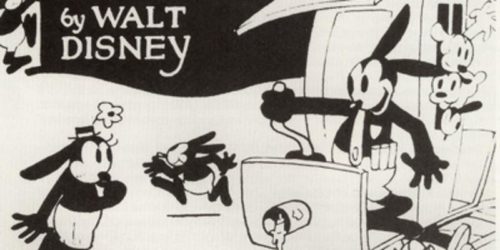 Walt dusted himself off again, and doodled a mouse. The legend claims it was on a train ride back to Kansas City. He showed it to his wife and said, yes, Mortimer Mouse will be my next big star! She renamed it Mickey. (Another good point — play “yes, and…”, accepting suggestions and ideas from other people. Collaboration makes things better than they would have been on their own.)

Walt Disney’s career was like that over and over — risks, gambles, mistakes, and yet he built an incredible legacy. Meanwhile, over in Japan, Universal Studios owned this character Oswald who became incredibly popular in tchotchkes and doo-dads — the Disney-created version, not the later Walter Lanz one. The Disney company realized they needed to bring Oswald home.

So they traded Al Michaels for a cartoon rabbit (glib description, but accurate), put him into a video game, and gave him a gas station at the rebuild of Disney California Adventure.

Slowly but surely Oswald regained popularity, to the point that he got (briefly) popular enough that the company had to have him start making appearances at his gas station.

In truth, the legend was just that — a legend (and I made sure to tell my students that). Walt didn’t work alone (another important lesson); instead, he collaborated with the introverted Ub Iwerks on both Oswald and Mickey. Together, they created something innovative, pushing the limits of a fledgling medium. To get something closer to the full story, as well as how the legend came to be, read A Mouse Divided by Jeff Ryan. And to get some of the story of what the Walt Disney Company has done to restore Oswald, read this hefty coffee table book — it’s great.

There’s more to my story that I would tell the students, involving Steve Jobs and George Lucas and again reminding them over and over that they need to feel the freedom to risk and fail if they’re truly going to learn. Make mistakes, try something new, put yourself out there. (I did — changing careers at the age of 50 and absolutely terrified to have done it. But it worked out.)

I try taking my own advice to them. So they should take it, too. Risk. Dust yourself off and try again. Maybe someday you can have your own cartoon gas station. If the rumors are true, maybe you can also be part of the next wave of media.