It wasn’t every Friday night I could sneak out to the family room at 11:30 and watch Creature Features. By middle school, though, it had become a staple to rally sleep-overs around. In the San Francisco Bay Area, it was all about Bob Wilkins. Sometimes the movies were terrible, and he told us so. Sometimes they were surprisingly good. But if Wilkins or his successor John Stanley ever showed Giant from the Unknown, I missed it.

The surprise is that though, yes, it follows a formula that has now become cliché, this 1958 monster movie holds up. If it hadn’t been low-budget and part of a glut aimed at teen-agers at drive-ins, the “Giant” might have become a classic creature. A 500-year-old Spanish Conquistador (6’7″ Buddy Baer), the creature has a thirst for blood and, of course, blondes — it’s 1958. With make-up by Jack Pierce, who created Boris Karloff’s Frankenstein and Mummy looks, the conquistador looks a little loamy, kept in suspended animation by the unique properties of the earth around Devil’s Crag. It’s not terribly frightening make-up, but it gives Baer just enough inhumanity to make his eyes all the more piercing when staring through the underbrush.

Not that he appears for a while into the film. Instead, it opens with townspeople upset about livestock being mysteriously maimed, with a growing suspicion that a local native legend is coming true. The spirits of the land seek vengeance. Sheriff Parker (Bob Steele) knows something’s up, but seems distracted by his distrust of the smarty-pants Wayne Brooks (Ed Kemmer). Young, handsome, and only a touch arrogant, Brooks has discovered something interesting in the woods, which he shares with visiting archaeologist Dr. Cleveland (Morris Ankrum).

Conveniently, Cleveland and his daughter Janet (Sally Fraser) have come to spend the summer exploring those same woods. They hope to find proof of the legendary Diablo Giant, a rogue conquistador named Vargas who had taken some men and split off deeper into the California woods around Big Bear Lake, searching for “Indian gold.” That element is definitely a product of its time, with the script sadly calling its lone Native American character “Indian Joe” (Billy Dix).

Yet the macguffins get out of the way fairly fast, tightly setting up all the interpersonal conflicts (and, of course, romance) within 20 minutes before lightning crashes and a hand breaks through the dirt. It’s paced fairly similarly to Creature from the Black Lagoon, costing a lot less but looking almost as good. Directed, shot, and edited by Richard E. Cunha, Giant from the Unknown doesn’t just look better than it had to be; it is better than it had to be, and so was a welcome surprise. (It also feels ripe for a remake.)

The extras on the Film Detective blu-ray include a commentary from writer Tom Weaver, along with audio from “special guests.” Detailed almost to a fault, it’s interesting commentary but Weaver also tends to go off on tangents away from what’s happening on screen. Better background comes from an interview with retired actor Gary Crutcher, who played the earnest teenager Charlie Brown. It’s a tantalizing quick glimpse at ’50s Hollywood. And then C. Courtney Joyner, screenwriter/historian/novelist, weighs in on the career of Bob Steele — Joyner is a film detective, and it’s a high point. The disc also comes with a sturdy and informative booklet, written by Weaver.

All in all, it’s a nice package, which makes for a good post-Christmas gift for your favorite schlock film fan — perhaps yourself. Pre-orders on the Film Detective site start on 12/15/2020 for a 1/19/2021 release. 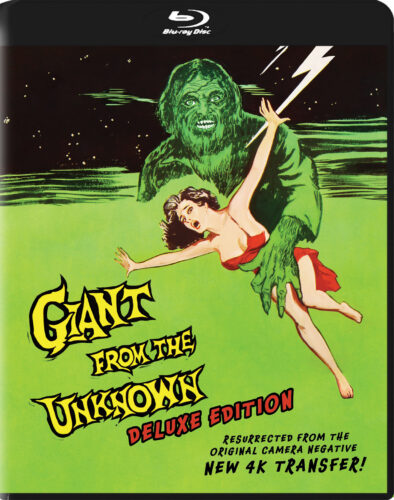