Fanboy Planet has a standing order to introduce Fanpeople to the Next Generation of wrestling stars that are currently out there getting ready to explode. This go-‘round Nattie Neidhart, niece of Bret “The Hitman” Hart and Owen Hart, as well as one of Canada’s best young second generation stars, was kind enough to answer my questions.

Fanboy Planet: It’s probably best to start with the obvious: you’re a member of the long line of Hart family wrestlers. Do you ever feel the pressure of having to live up to the standards set by your uncles, grandfather and Dad?

Nattie Neidhart: Well, I am obviously aware that I do come from a really talented wrestling family, but I know that they worked hard to get where they are. I believe that although I do have big boots to fill, I can achieve success in this business by earning it a paying my dues.

I feel the pressure all of the time, but I let that pressure charge me in a good way. Sometimes it can be overwhelming because sometimes I feel like when I walk out to the ring, people are going to expect to see excellence. I feel like if I don’t deliver, they will be disappointed. Then I rationalize to myself, that my family never got there overnight, and it took years of growth for them to reach the top. 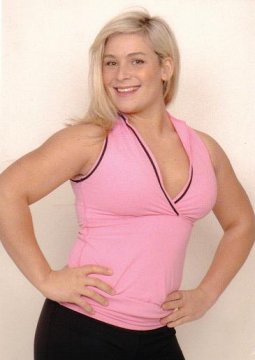 I try to push myself harder and drive myself more and more, all of the time. I want to make my family proud, but more than that, I have high expectations for me and I try to focus on that.

Fanboy Planet: What was it like growing up around the business? Are you glad to have your cousins in the business at the same time?

Nattie Neidhart: I had a really good childhood. I was always surrounded by wrestling, and it wasn’t unusual to go to Randy Savage’s house for a party, or Hulk Hogan’s or have Brutus Beefcake and Hawk and Rick Rude come to our house and spend time with us.

My cousin Harry Smith understands this too, because Davey and Diana lived so close to us in Florida, and usually we went to these parties or gatherings together. Wrestling was a daily discussion because it was my grandfather’s livelihood and his children’s. My dad was gone a lot, but when we did spend time with him, we enjoyed ourselves.

It is nice that some of my cousins are involved in the business of pro wrestling. Ted and Harry have both been involved for a long time, and they are great to get advice from. Harry has loved wrestling for so long, and sometimes when he gets in the ring, I watch him move and it inspires me to be a better wrestler. We all have a little bit of competitiveness in us, but that only makes us work harder.

Fanboy Planet: Tell me about your training. What was it like training under Tokyo Joe?

Nattie Neidhart: I didn’t do all of my training under Tokyo Joe. As well as Joe, I have worked with my uncles Bruce and Ross, TJ Wilson, an amateur wrestling coach, a mixed martial artist, and many Japanese woman wrestlers.

Joe helped me a great deal with my wrestling by focusing on the smallest of small details, and he really helped me emphasize my strengths. I don’t know who could top his training. My uncle Bret thinks he might be the best trainer in the world, as he trains with a science.

He didn’t just teach me about wrestling, though. He taught me that a lot of what you learn in wrestling, you can apply to your life. He changed the way I look at so many things. He has endured a lot, and he has taught us that in order to make it to the top in this business you have to be extraordinary. He emphasizes so much that wrestling is real, and it is hard work and you have to show your guts and never give up. 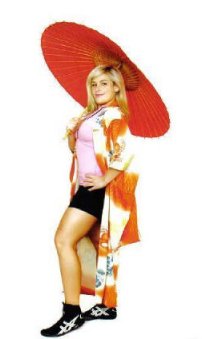 Fanboy Planet: OK, enough of that. Let’s get on to what you’ve been doing. You started with MatRats, that famed small group that brought out folks like Jack Evans, Teddy Hart and Harry Smith. Tell us about your time there.

Nattie Neidhart: Well, MatRats only lasted for a short time, but it did influence my life greatly because it was what got me involved with wrestling. I hosted the show, and I was having a great time with that. Then, just for fun, I wanted to get in the ring, and try some stuff. I fell in love with wrestling and I gained so much confidence. I look back on those times, because they were a lot of fun. Just being with my best friends and cousins and just having a dream and feeling inspired by the idea that people really wanted to see us.

Fanboy Planet: The first tapes I saw of your work was from the feud against Belle Lovitz (I seem to remember that being her name). That seems like it went on for a while, didn’t it? What did you learn about working a long program from that feud?

Nattie Neidhart: The feud did go on for a while. That was because there was only us. We were the only girls. I loved working with Belle and I still do. I could see a lot of growth from each of our matches. We had high expectations, and I think with each bout, we rose to new challenges and really pushed each other.

I think working a program with her challenged us to be creative and insightful while telling a story. We came a long way together and the fans could see our evolution, so to speak.

Fanboy Planet: You’ve worked Japan, including working against legends like Kyoko Inoue. Did you like working Japan? How would you say it differs from working Stampede or other NA feds?

Nattie Neidhart: I loved working in Japan. It was an experience of a lifetime and something I would never trade in. Japan reminded me a lot of Tokyo Joe. I took a lot of Joe’s advice and I held on to it tightly when I was over there because I needed all of his training to get me through it out there. Joe taught us to be mentally tough, and with the cultural barrier, I think Japan made me so much stronger. The wrestlers were so good, and each girl I worked raised me to a higher level. Over there, you have to earn respect.

I would say it differs from NA because the style is of its own and the girls are really unique. Sometimes their psychology may seem a little funny, but it is their own style. They pretty much invented their own style out there. They don’t take any nonsense and they are all business in the ring.

I notice in North America, the style is not as intense and the matches are a lot more tame. But styles differ everywhere, and you have to be the one to make the most of it, wherever you are. 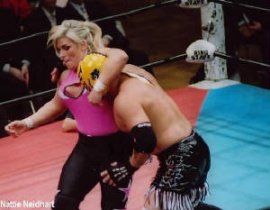 Fanboy Planet: You’ve also worked against guys having good matches with the likes of Asian Cougar. How much different do you find it working against a guy instead of another woman?

Nattie Neidhart: I like to work both, because I have to. There are not enough women, so when I work with a guy, I don’t mind at all. I am up for the challenge and you have to be able to diversify and change your style or your mindset. I can hit guys a little harder, and not be scared that I am going to hurt them.

But, if I had to pick, I would choose women, because then it is more realistic.

Fanboy Planet: You’ve also worked the UK, where there’s a core of fans that are simply rabid for the stuff. How did it effect your work? You want to work there again? Any thoughts of trying to get in on the Italian circuit that’s so hot right now?

Nattie Neidhart: I very much enjoyed working in the UK. I worked for ALL STAR WRESTLING, I learned about letting go of my inhibitions and having a character in the ring. I never really knew how to involve the crowd or entertain people until I went to England. I made some great friends over there and I learned more than I expected. I would love to work there again very soon.

I would like to go to Italy. Maybe in the summer if there is interest for me. My uncle Bret stays there often and I have heard that the Italian fans are great.

Fanboy Planet: What direction do you see the future of your career going? Do you see WWE/TNA in your plans, or would you rather stay indy and work dates internationally? Is there any chance of Hart Foundation: The Next Generation with you, Teddy and Harry? That would be so totally sweet!

Nattie Neidhart: That would be a dream come true! I would love to see that happen and I can only hope so. There is room for it. It would be sort of a reincarnation of our family and the legacy that they have passed on to us. I think Stu would like to see us stick together and stay strong. No matter what happens, wrestling is something that is important to my family and we will always be grateful for the many memories that we have from it.

You can find out more about Nattie Neidhart at http://nattieneidhart.cjb.net/.