Read that banner again. “John Carpenter Presents.” THAT John Carpenter. That should catch your attention enough to read “The Grimms Town Terror Tales: And So It Begins,” an upcoming offering from Carpenter’s Storm Kids imprint. What will keep you hooked, though, is the work of writer Neo Edmund and artist Renae De Liz. Working from Carpenter and comics collaborator Sandy King’s initial idea, they’ve executed a lush first chapter to a slightly scary graphic novel aimed at upper elementary school kids.

Though it has a foot in familiar territory, it’s the telling that makes it new. Edmund (The Alpha Huntress Chronicles) gives us a modern Hansel and Gretel Grimm, about to get drawn in to something far more daunting than a candy house. Reversing the expected a bit, they’re returning from a safe camping trip in the woods, to find their family home has been ransacked and their parents are gone.

Hansel notes it doesn’t make sense, because there are no robbers in Grimmstown. Sure, we can suspect why, but the two kids don’t. Maybe it’s pranksters. Maybe it’s aliens. Or maybe it’s…

A little goblin that bursts from behind a locked door. As the subtitle promises, so it begins.

And this is where extra praise has to be heaped onto De Liz and letterer Janice Chiang, who brings the voice of “Grubb” (and other mysterious items) to life with every balloon. De Liz keeps Hansel and Gretel looking like believable 21st century schoolchildren, while creating some terrific staging. Grubb’s first appearance is downright live theater, using the panels to have the characters face off while we still get a full view of their faces. 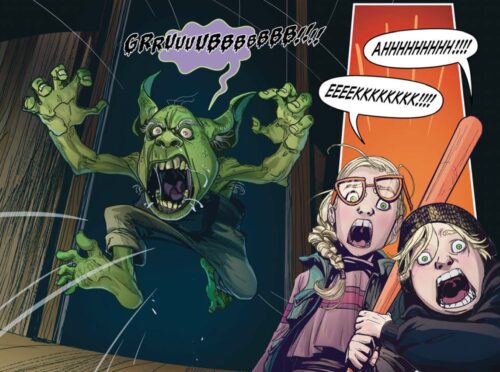 Layouts shift, starting fairly straightforward as the kids slowly explore the house. Once Grubb enters the scene, the shots are ordered but growing more jagged the less time the kids have to think. Their world has turned upside down, and while De Liz doesn’t make that literal, it’s clear they’re out of their depth. For the nonce.

It’s a beginning, and a strong introduction to the coming first graphic novel in what should be a series, Rise of the Candy Creeper. (There’s that witch cooking children, maybe.) One advantage of a digital Free Comic Day (created to tide us over until Free Comic Book Day can actually happen this year) is that you can still find some of these titles. “And So It Begins” is available here. 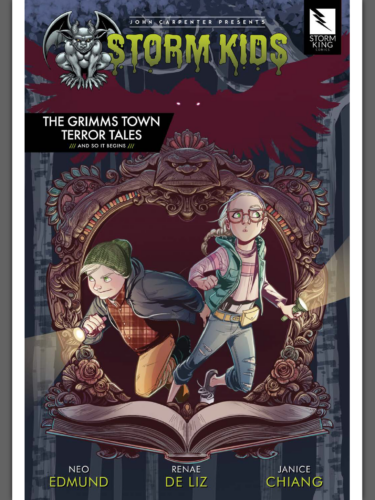