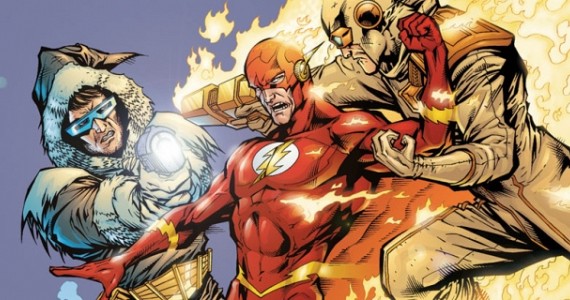 In Part One of our interview with Geoff Johns, we talked about his start, and what has come before in his books. Today we take a look at what’s happening in JSA, and the dark days ahead for The Flash…

Derek McCaw: You kind of tipped your hand in San Diego that you will have an Hourman in the JSA.

DM: Let’s go to Hawkman. You’ve had great fan reaction. What’s been the professional reaction? Are there writers at DC going “I wish I’d thought of that?”

GJ: No, everybody says we did a good job. So we’re happy about that. People are like, “how’d you do that?” and we’re like, “uhhhhh…we just did it.”

DM: To go back to what you said earlier about diversity, you really have brought back, essentially, the first Hawkman. So why bring Carter back and not just create a whole new one from scratch?

GJ: Because it’s JSA, and we want it to be really simple, and we think that the reincarnation angle is the coolest, simplest way to do it. That’s why.

DM: I don’t know if it was you or (Green Arrow artist) Phil Hester that spilled that in Hawkman, you’re going to be the first to get to use Green Arrow.

DM: It seems like Kevin Smith has as much control over Green Arrow as Byrne did when he did Superman. So how’d you get him to go along with it?

GJ: I called Kevin up and I asked if we could do it.

DM: He said sure?

GJ: Said yep. I said it’s going to come out around Green Arrow 15, so by then it’s been a nice, you know, over a year.

GJ: Yeah, so he said it’s cool. And Rags (Morales) will draw a hell of a Green Arrow.

DM: Excellent. I forgot that Rags would be on the book. Did you ever find the copy of (Hawkman) number one that got swiped (at the San Diego Comic-Con)?

DM: Some evil fan out there…

GJ: Someone’s got that great cover. That cover ruled.

DM: So when is Hawkman number one coming out?

DM: Let’s move over to The Flash. You’ve really been the first to give Keystone City an identity, a kind of civic identity. What prompted you to do that?

James Robinson did it so well with Opal City, and of course Batman and Superman have their respective cities as well. So why not really try and explore everyone’s city to reflect their personality?

Like we have Hawkman’s new city, St. Roque, is going to reflect Hawkman and Hawkgirl a lot. And Keystone I’m trying to have reflect Flash. It’s blue-collar, it’s hard-working, and they make things that move. It’s all about transportation, auto factories, train yards, and getting people from one place to another. What better city for Flash than that one?

DM: You used Cyborg (in The Flash: Our Worlds At War) and set him up for moving to Central City.

GJ: Yeah, he’s going to move to Central City. Again, he fits in perfectly with what we’re trying to do with Keystone. It’s industrial, it’s a machine/man thing. He fits right in there. He was an old Titan and for me, if we’re going to have a supporting superhero, I’d much rather have him than a speedster.

DM: So you are going to use Cyborg on a somewhat ongoing basis?

GJ: Yeah, he’ll be on an ongoing basis. I mean, he’s not in it, obviously, for a while. He doesn’t even show up until 180, for four issues. But he’ll be in and out for a while in the monthly book, but he will be a permanent fixture. We’re really having a lot of fun with him, and I think people are happy to see him back, sort of back, to the old-school way.

DM: I want to pick up on something else you said in San Diego. I believe the actual quote was that you “would KILL to do a Captain Cold mini-series.”

DM: What is it about Captain Cold, out of all the Rogues?

GJ: I just think he’s got a great visual, and I also think, like a lot of these Rogues, that he’s capable of being a much more complex character than anybody else. I like getting into his psyche and figuring out why he does what he does. Why is he continually putting himself in jeopardy like this? Why walk around with a snow gun and a silly costume? He’s cool. I think he has the potential to be a really deep character.

DM: Is The Top alive? I thought he was dead.

GJ: He was reincarnated.

DM: He’s one of those who escaped from Neron’s Hell?

GJ: Yes. And he’s actually in Iron Heights. He’s in one panel. And then he’s in The Flash 179 briefly. We have a lot of plans for him, to revamp him and re-update him. And why not? He’s a classic Rogue. We haven’t seen him for like fifty years.

DM: Your take on The Rogues is getting a little darker. One thing that goes back to at least William Moessner-Loebs on the book is that the Rogues had an almost Shade-like respect for Barry.

DM: Mark Waid darkened it, and you’ve taken it further. They’re a lot scarier, a lot more antagonistic towards Wally.

GJ: They should be. We have a scene in which Cold says, “I respected Barry. Barry was someone perhaps you could look up to.” And he even says, “Back in the day, I hung out with my family. And he mentions Mardon (Weather Wizard), Digger (Captain Boomerang), and Allen (The Flash).

To them, it was like a game with Barry Allen. Now with Wally, they see Wally as this punk kid who’s a pushover, who’s naïve, even though he’s not. And they just don’t like him. It’s a very antagonistic relationship and it’s going to get worse.

DM: Almost like they’re more protective of the Flash legacy than he is.

GJ: In a strange way, which you’ll never see in print, you’ll never see them admit, they’re almost like “this guy shouldn’t be The Flash. Get rid of him.” But The Rogues, Iron Heights is an extremely dark book. It’s the darkest Flash story that I think I’ve ever seen. We introduce a lot of Rogues that are pretty horrific. I mean, one’s an out and out serial killer.

It’s not like we’re setting out to do dark things just to do dark things. It’s that we’re trying to diversify Wally’s rogues, and Wally has all these bright and shiny rogues. We’re trying to balance out by making a few, like Weather Wizard…I don’t think we necessarily made him darker, but we made him more focused and more powerful. Captain Cold we didn’t make darker, we just made…I mean, hanging out with hookers at a hockey game, you can’t say that’s darker, but it’s…

GJ: Yeah. More complex. And in Iron Heights we have a lot of villains that would give Batman chills down his spine. We’re really trying to build up Flash’s Rogues Gallery with old and new, to make it really diverse, in terms of guys that rob banks, to, in Iron Heights, guys that cut out people’s tongues, to guys that just want to beat up Flash, to guys like Tarpit, just joyriding in a body of tar. It’s from fun to dark to scary to whatever.

DM: You mentioned females, so it’s fair to bring up now that you’re the one writer to really be dealing with Wally’s past as a player.

GJ: Oh, yeah. I can’t believe no one ever did that before. He was an asshole, a womanizer, and a chauvinist. And I think that’s got to catch up with him, otherwise he’s not a true hero. He’s got to deal with that fact. I think he’s starting to, and we did a lot of focus on that. Magenta (ex-girlfriend with magnetic powers and a bi-polar disorder) is going to be around for a while…some people want her to be the hero because they like her. But Magenta is great because she symbolizes what Wally was, and that’s why she’s a great villain to put in there. Even if she is good and bad, it goes back and forth, she’s still a great villain to symbolize that.

DM: You’re picking up a lot of plot lines and characters that have just been missing from the book for so long.

GJ: Yeah. I mean, why not? In one issue we really make Chunk cool, we have a neat story with him and Wally that I think is really different from the stories we’ve been telling. It also sets the stage for our upcoming arc Crossfire. Chunk’s not going to be back in every issue, he’s only in this issue, but we will periodically check in with him. Or he’ll appear when we need him to. Even if there are characters I don’t have an affinity for, I do like Chunk after writing him.

You’ve still got to respect what people invented, what people did. That’s why I like Flash, because of what Loebs, Barron, really especially Barron, and Waid did on the book before I got on (it). And of course Bates and Fox and everybody else. You have to respect what they did. That’s the reason that we’re using Goldface. Bates brought him in there, made him a cool character. And now it’s like okay, he’s got a connection, let’s see what we can do with him. Along with putting new supporting characters, like Chyre, Murillo, the cops. The baby, and everything else. It’s just like JSA, you’ve got mix the old and the new and respect what they did before.

Tomorrow in Part Three of our exclusive interview with Geoff Johns, he answers a couple of terribly fanboy questions, hopefully puts some rumors to rest, offers advice to Warner Brothers, and talks about working for Marvel.