If you’re a filmmaker, Kate Kelton is the type of actress you want to have with you at every turn. Great to work with, funny, and easy on the eyes, Kate, a Czech by birth, is well on her way to becoming the next ‘Oh yeah, that girl’ girl on the scene. So where might you recognize her from? Well, Harold and Kumar Go To White Castle is her most recent release, in which she plays one of a pair of British twins with a new take on a classic Milton-Bradley game. She also had a very memorable scene with William Shatner in American Psycho II. Luckily, Kate actually agreed to talk to me while she was on the set of a film short, The Chick Magnet, and answer a few of my fanboy questions.

If you’re a filmmaker, Kate Kelton is the type of actress you want to have with you at every turn. Great to work with, funny, and easy on the eyes, Kate, a Czech by birth, is well on her way to becoming the next ‘Oh yeah, that girl’ girl on the scene. So where might you recognize her from? Well, Harold and Kumar Go To White Castle is her most recent release, in which she plays one of a pair of British twins with a new take on a classic Milton-Bradley game. She also had a very memorable scene with William Shatner in American Psycho II. Luckily, Kate actually agreed to talk to me while she was on the set of a film short, The Chick Magnet, and answer a few of my fanboy questions.

Fanboy Planet: So, you’re a Canadian. How’s that workin’ out for ya?

Kate Kelton: You’re making fun of me, aren’t you? Aren’t you?!

Fanboy Planet: Sorry about that. OK, seriously, Harold and Kumar Go To White Castle may end up being this summer’s American Pie. What did you think when you first got to look over the script? 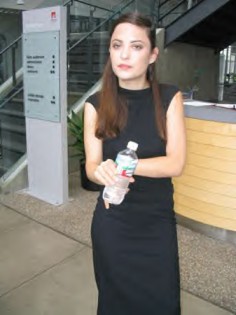 Kate Kelton: I thanked my lucky stars I keep my trusty Depends on hand for occasions JUST like these.

Fanboy Planet: In H+K, you have a strange, and hilarious, bathroom scene where you and your ‘twin’ play a game similar to BattleShip. Care to explain the rules? How does one prepare for a scene where you’re supposed to be in the loo? Which was harder: the British Accent or the performance in the toilet?

Kate Kelton: I actually can’t explain the rules and will admit we had issues working those out with the help of our intrepid director, Danny Leiner (Dude, Where’s My Car?), ultimately settling on victory by way of sound effects.

We were given clickers that would set off a lovely pooping noise, which we clicked away on with glee everytime we sunk a Battleshi*, as it were. They were later replaced by much more convincing sound effects added in post. But having both suffered from Lactose Intolerance, my twin (played by Brooke D’Orsay) and I felt we had sufficiently researched our roles and its implications … but I still won.

As English is my second language (German being my first, being born of Czech expatriate hippies who toured through Europe in a VW bus coated in flowers for the first 7 years of my life), my propensity for picking up accents is pretty embarrassing actually: when in the company of anyone who has one I’ll tend to start speaking in said tongues! So I’d say the pooping may have rated higher in the difficulty category…I have only been Lactose Intolerant for a few years, whereas I’ve been a nomadic immigrant my whole life!

Fanboy Planet: Okay, off Harold and Kumar for a moment. You worked with one of the greatest actors of the last century, Mr. William Shatner, in American Psycho II. What was it like getting to touch a legend? Any good stories?

Kate Kelton: Oh Chris, you little dog you. Yes, Mr. Shatner was introduced to me in Make-up as “Bill, [my] scene partner,” and up until that point I’d had no idea who I would share my ‘bedroom’ scene with. Now, I’ve got a little pointed elfin ear I’ve told everybody, my whole life long, came from being part Vulcan … but I’ll admit that in the midst of registering the shock of crawling into bed with my on-screen ‘boyfriend’ Bill, I neglected to tell the one person it actually applied to!

And once we were doing our scene, he had this strange habit of tossing my head from side to side in between his cupped hands, my guess is as sort of a ‘love touch’.’ and a few frames of this slick move actually made it into the movie, but to this day I still remain a little puzzled where he may have picked up this particular gem.

Fanboy Planet: Well, according to most of the behind the scene Star Trek books, Shatner is more than a little freaky! Anyhoo, Now, You’ve done some fairly high profile stuff, like AP II and H+K, and you’ve done some short films with unknowns. What’s the difference? If the money were the same, which would you do more often?

Kate Kelton: The differences really amount to the severity of the heavy lifting required. But being understaffed also amounts to being a wee more entertained throughout the journey, whereas on some of these ‘bigger’ pictures, the amount of dead-time on set is oft filled with an eerie sort of ‘kid-glove’ placating of an actor – I’ve never been offered as many bottles of water before, as if I didn’t even have the acuity to determine my own thirst levels! (But it could just also mean I’ve just not had a large enough role in the bigger films to warrant a lack of dead-time!)

But really, I’d rather the massage offers proffered up on lowly shorts by crews that immediately form a strange tight brethren with the actors. So yeah, I guess my short answer is, if the money were the same, I’d do shorts until I was blue in the face. 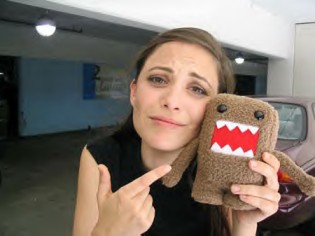 Fanboy Planet: You did the whole film school thing. You thinking about getting back behind the camera any time soon?

Kate Kelton: I’ve actually continually bounced back and forth between the two, co-producing some shorts and music videos with crews I’ve formed bonds with through the acting side of things, so that helps feed my need for more control over a picture that inevitably gets relinquished by filling an acting-only roll. But to helm a film completely? I think I’m saving that for when I’m 50…I’ve just always had a great feeling about 50 for some reason.

Fanboy Planet: We met when you came down to San Jose with the short Eden’s Wake and the feature Ham and Cheese at Cinequest. What’s happenin’ with Ham and Cheese? Any idea if more of the folks in the States are gonna get a chance to see it?

Kate Keltner: It’s funny actually, because I knew Eden’s Wake would be premiering at Cinequest, and then I went ot see a cast and crew screening of Ham and Cheese and found out they were coming to San Jose, too! Now that Harold and Kumar hit theatres on Friday, I’ve gotten an e-mail from my peeps at Ham and Cheese that hit select screens across Canada on said same day! It’s weird how my life works out sometimes. But I’ll let you know about US distribution as soon as I hear word; apparently (Ham and Cheese star and ex-Kid In The Hall) Dave Foley recently saw it, just LOVED it, and told our groovy director, Warren P. Sonoda, that he would help in any way he could to get this puppy out to the people. That always helps an indy out!

Fanboy Planet: You’re also a visual artist. Do you find any connections between the acting and the painting?

Kate Kelton: ‘To serve the piece’ is the most vivid connection that stands out. There is a lesson to be learned by sincerely becoming a good sport, and one must really be able to lend focused, unconditional support to one’s creation; without ego, nerves or expectation. And that’s ubiquitous for art and for film. So yes, I’d say my training as an artist has definitely helped me become a better actress; absolutely, yes.

Fanboy Planet: Every interview has to end like this: What are you working on next?

Seriously, it seems to be the priority, having met with a host of encouraging casting directors in LA in the wake of this Harold and Kumar premiere. There is nothing specific coming down the pike at the moment acting-wise, but I’m looking forward to next year’s release of Cake, a film I just wrapped shooting on with Heather Graham, David Sutcliffe, Cheryl Hines, Sandra Oh, Keram Malicki-Sanchez, and Sarah Chalke. It’s a hoot and a half.

Then we’re in post with a short I co-produced with Keram Malicki-Sanchez called The Charge of the 0.8 Ziya, and then I’ll be producing another short film for Sarah Michelle Brown, creator of Eden’s Wake, which just recently got into London’s BFM film festival (Black Filmmaker Magazine FF), the largest dedicated black film event in the UK! So, you’re a Canadian. How’s that workin’ out for ya?