Though publishing company MLJ started in 1939 with superheroes and whatever else would sell, it was publisher John L. Goldwater’s attempt to duplicate the movies’ Andy Hardy that would resonate. Sure, MLJ launched the first patriotic superhero in The Shield, predating Captain America by months, but when Goldwater, writer Vic Bloom and artist Bob Montana collaborated on a short story in Pep Comics #22, everything changed. Archie wasn’t even mentioned on the cover, but soon enough, he and his friends at Riverdale High became breakout stars.

They have since become cultural icons, spawning several successful cartoon series, a play, a movie and introducing subject matter like homosexuality and divorce into a traditionally conservative environment, treating them more matter-of-factly (and thus far more realistically) than Marvel and DC’s stabs at similar social relevance.

Some three quarters of a century later, Archie is still going strong with a new TV series and movie in the works, a Zombie Archie comic series, and several series dedicated to the storylines of pioneer gay character Kevin Keller as well as the teenagers as adults. The characters have continued to change with the times, thus solidifying its status as one of the top-grossing non-superhero lines of all time.

Oh, and occasionally they still dabble with those original superheroes, too, with current books devoted to The Crusaders and The Fox, but none of them come close to “America’s Favorite Teen-Ager” — Archie.

Deborah J. Draisin: Did any other publisher other than MLJ change its name to match that of its top-selling character? How does it feel to hold that top honor? 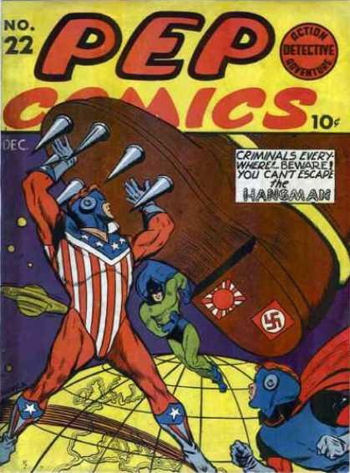 Victor Gorelick: Well, I wasn’t here at the time, but it’s part of the history of the company. I certainly knew about it when I started working here. MLJ was putting out all of these superhero comics during the war. Archie was a story that they threw into Pep #22.

Deborah J. Draisin: Back when characters like The Shield were the main thing that they were putting out?

Victor Gorelick: Mostly The Shield, yeah. The thing that is interesting was that, for the first year or so, Archie was really not promoted, he just appeared. He appeared in Pep and then he appeared in Jackpot #4 almost a year later.

There was a picture of him on the cover and that was it, it really didn’t promote the character, but yet he caught on. The first book came out in 1942 and it took off. It just became more popular.

Deborah J. Draisin: As evidenced by all of the people surrounding this booth right now.

Victor Gorelick: This crowd and all the other people at our panel.

Deborah J. Draisin: Would you still consider Archie to be as relatable a character now as he was in 1941?

Deborah J. Draisin: How so?

Victor Gorelick: The fact is that we’ve always tried to keep Archie up to date. The basic characters are there with Betty, Veronica, Archie and Jughead, yet each decade, they sort of adapt to changes.

Although a lot of things in Riverdale are pretty much the same, like the Chok’lit Shoppe, the fashions have changed, they all use computers and cell phones, they hang out at the mall. The high school is not exactly like the high schools are now, but there’s still that connection to what’s going on in the world today. 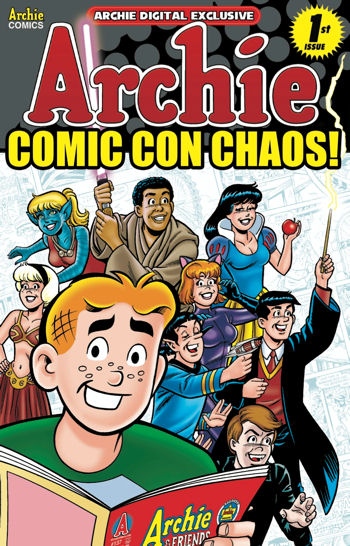 Deborah J. Draisin: I actually saw the tableful of horror Archies courtesy of Red Circle, which you just relaunched, yesterday. The concept of Afterlife with Archiewill definitely help launch him into the next century. Do you think that Archie and Friends have the correct tools to enter the world of the monster?

Victor Gorelick: It’s another road we’re going down with him – it’s another series. Obviously, it’s caught on, people are very excited about it. We’ll just keep it going until…but it’s really for an older crowd.

Deborah J. Draisin: Yeah, maybe not for the kids. Speaking of which, can we talk a little about the groundbreaking Kevin Keller storyline?

Deborah J. Draisin: How did it come about, what challenges have you faced and what made the company decide to stand its ground on the matter?

Victor Gorelick: Well, Dan Parent came up with the idea. Listen, it’s all part of what we were talking about with your other question – just staying contemporary. This is something that’s there, there are gay children in high school. This is how Archie and his friends accept him into the group. Riverdale is a place that’s really open to anyone, and kids are accepted, for who they are, for what they are, and for how they live. It doesn’t matter about race, religion. He’s just another one of their friends, a full part of the Archie universe now.

Deborah J. Draisin: That’s the way it should be.

Victor Gorelick: Some people were not happy with that.

Victor Gorelick: I had one writer who said they’d never write for us again because of it.

Deborah J. Draisin: I really respect you guys for standing your ground in spite of that.

Victor Gorelick: Yeah, but I have to say that, for the most part – like 95% – of the response was positive to the fact that we brought Kevin Keller in and with the way in which we handled the character, so that says something. 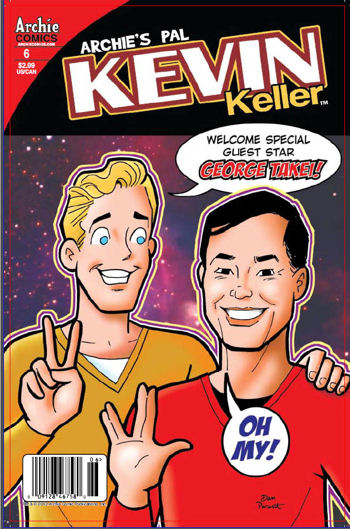 Deborah J. Draisin: It wasn’t even ten years ago when the Dad’s Garage Theater Company took a spin on Archie, and I don’t think you guys were that happy about it then.

(“Archie’s Weird Fantasy” was given a cease and desist order by Archie Comics — they changed all the character names and renamed it “Weird Comic Book Fantasy.” The playwright? Roberto Aguirre-Sacasa, currently writing the Archie movie and Afterlife With Archie – Derek.)

Victor Gorelick: You know something? It’s publicity. We may not like it – I know that the publishers were very upset with it. Yeah, you know, sometimes that kind of thing is just a recognition of the success of the characters.

Deborah J. Draisin: Success of the characters indeed: Archie is the top-selling auction item which is not superhero-related right now.

Victor Gorelick: That is true.

Deborah J. Draisin: You’re definitely doing something right. How do you think vintage fans of Archie felt about the movie version?

Victor Gorelick: Which movie version, the one that we’re working on?

Deborah J. Draisin: The one from the nineties – we haven’t, obviously seen the new version yet, but I’m excited about it.

Victor Gorelick: It’s going to happen! You mean the Archie movie To Riverdale and Back Again? Oh, it was awful!

Deborah J. Draisin: So everybody hated it, including you guys?

Victor Gorelick: Nobody liked it. First of all, they couldn’t use Archie as a teenager, because that was tied up with TV or something, so they wound up coming up with Archie fifteen years later.

Deborah J. Draisin: Right, I think he was divorced?

Victor Gorelick: No, he wasn’t, but Jughead was divorced, and he had a kid who played the drums. We actually did a comic based on the movie.

Deborah J. Draisin: It’s pretty interesting to think about what they’d be like when they grow up.

Victor Gorelick: Well, we did that with The Married Life and Life With Archie, which were a lot more insightful than that movie was (both laugh.)

Deborah J. Draisin: A lot more informative too. Do you think now be a good time to relaunch one of the cartoon series’?

Victor Gorelick: We’ll have a new cartoon series in 2014, so we’re not relaunching anything.

Deborah J. Draisin: Awesome! My dad would really like to know why Veronica has a Southern accent if they’re from middle America.

Victor Gorelick: That was only on the cartoon show, it’s not in the comic. When you read the comic book, does she talk in a Southern accent? 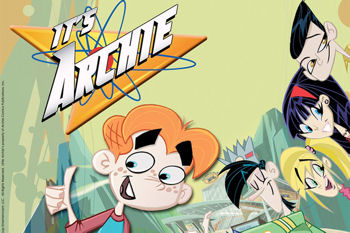 Victor Gorelick: I guess they wanted her to sound like Scarlett O’Hara.

Deborah J. Draisin: Well, Veronica is kind of a villain, so that makes sense.

Victor Gorelick: Listen, I knew someone who was in the licensing business, and he spoke with a British accent, but he wasn’t British, he was American. He just put on that accent.

Victor Gorelick: Yeah, because he felt that that that would make him more accepted.

Deborah J. Draisin: It would make him seem more badass.

Deborah J. Draisin: Well, it’s nice to see Archie grow up and stop being a two-timing louse, because he got away with it for too many decades already.

(To be fair to Deb, he’s married to both women in alternate universes — even though Aguirre-Sacasa also wrote for Big Love, Archie is not a polygamist. – Derek) 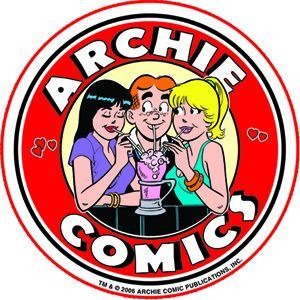