The AMC Walkway of Downtown Burbank is (thankfully) a far cry from Crime Alley. But it has a new protector anyway.

In partnership with DC, Visit Burbank unveiled a 7 1/2 foot statue of Batman, located in a popular thoroughfare full of restaurants, shops, and of course, a movie theater where eventually you’ll be able to see Robert Pattinson in The Batman. Based on the character design DC Chief Creative Officer Jim Lee did for the 12-issue Batman: Hush comics story written by Jeph Loeb, Batman was “brought to life” in 3D form by digital sculptor Alejandro Pereira Ezcurra. Crafted in bronze by skilled artisans at Burbank’s American Fine Arts Foundry and Fabrication, the statue measures seven-and-a-half feet tall and weighs 600 pounds. 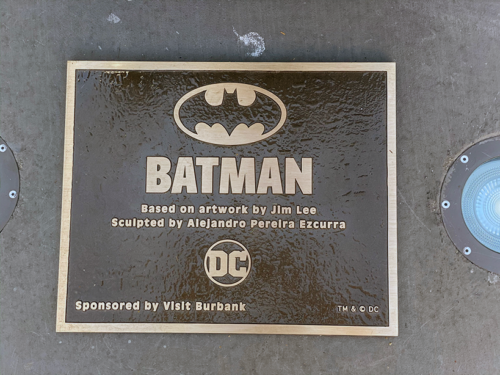 The City of Burbank encourages visitors to please be responsible, practice social distancing, and wear a mask when making a pilgrimage to this statue. Bruce Wayne would, and you know it.

Maybe it’s silly, but I love fun things like this, and on another note, this is how a city supports not just tourism, but its own economy. I don’t know where Ezcurra lives, but my money is that it’s somewhere around Burbank. And the city turned to a local business to create the statue. For those not familiar with the AMC Walkway, it’s an open air mall in Burbank’s downtown shopping district, which at least for now Burbank has partially closed off to cars and trucks, encouraging foot traffic and open-air dining. (They experimented with it pre-pandemic, so I’m hoping this is permanent.) 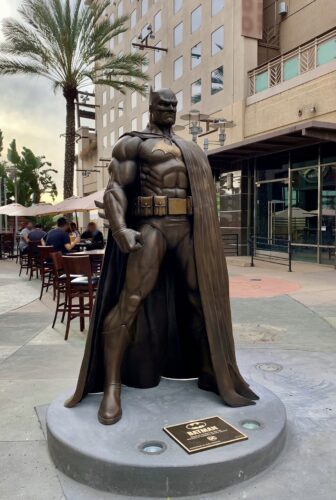 DC wants to remind you that:

Batman first appeared in Detective Comics #27 on March 30, 1939, and has stood as a symbol of determination, bravery, and justice to generations of fans for over 80 years. He has influenced every area of modern entertainment, appearing in countless comic books, Saturday morning cartoons, multiple television series, video games, theme parks and experiences, toys, collectibles, and apparel and lifestyle products, as well as blockbuster animated and live-action films. Batman continues to be one of the most popular superheroes ever created.

In other words, everybody loves Batman. Let’s also add what the press release didn’t. Yes, everybody seems to know Jim Lee’s imagery, but we owe a debt to the following creators from 1939 and 1940: Batman was created in 1939 by Bob Kane with Bill Finger (going with the legal wording), and Jerry Robinson helped catapult the character to iconic status by working with Finger to add in Robin and the Joker. You don’t get Hamlet without Shakespeare; you don’t get Batman without those three young men from the Golden Age of comic books.

UPDATED: We did go over there today to get some close-up shots and say we saw the statue in person.