UPDATE 12/20/2019: “The Scheme is Sound” has been making its way through film festivals, and Parkview Elementary School music teacher/writer/director Kevin Croxton just let me know that it’s been chosen for competition in the IndieBOOM! Film Festival. The movie with the most views wins, and Kevin says that any prize money will go right back into these annual film projects with his elementary school students. Holy Music Education! (Next spring’s project sounds pretty fun.) Watch the Vimeo link below!

Batman: The Scheme Is Sound from IndieBOOM! on Vimeo.

This may be the greatest thing you will see on the internet today… this week… this year. An elementary school music club created their own episode of Batman ’66, providing a little lesson in music history AND doing an incredible job of duplicating the feel of the original. Gang, it’s why from time to time we have to stop and remember these are characters for kids, not just inspiring in terms of right and wrong, but creativity. Sure, adults helped guide them, but this is something truly special. 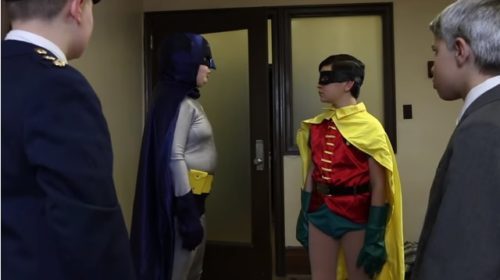 Batman: The Scheme Is Sound is Parkview Music Club’s nostalgic tribute to the 1966 Batman TV series. The music video feels like a classic Batman episode from beginning to end, and follows Batman and Robin on a quest to unravel a sinister plot of Batman’s most notorious villains. The characters in the film are based on Batman characters created by Bob Kane, Bill Finger and Jerry Robinson. This fan film is not associated with DC or Warner Brothers. The Parkview Music Club is made up of 4th and 5th Grade students from Parkview Elementary School in Van Buren, AR

Personal favorites: the young actor portraying Alan Napier’s Alfred, and oh, that Penguin. Special thanks to Mark Waid and Christopher Sequeira for alerting us to this video’s existence.