When a big studio tentpole movie comes out, one thing can be certain: there will be a ton of licensed toys, doodads, and gizmos bearing logos and/or likenesses of the lead actors. So it’s no surprise when we got Batman v Superman cereal (the Superman cereal wins hands down). But it’s also 2016, so we’re going to get gadgets — and it’s a pleasure to be able to say that Fanboy Planet received some that are both useful and at a decent price.

EMTEC, which has been in the business of licensed imaged flash drives and portable phone power banks for a while, released said products for Batman v Superman Dawn of Justice. So upon receiving them for testing, I put the power bank to a practical test. On our last podcast, I’d let my phone run down. Still running the apps I usually have open during recording, I plugged into the bank and was almost to full power by the end of our recording. 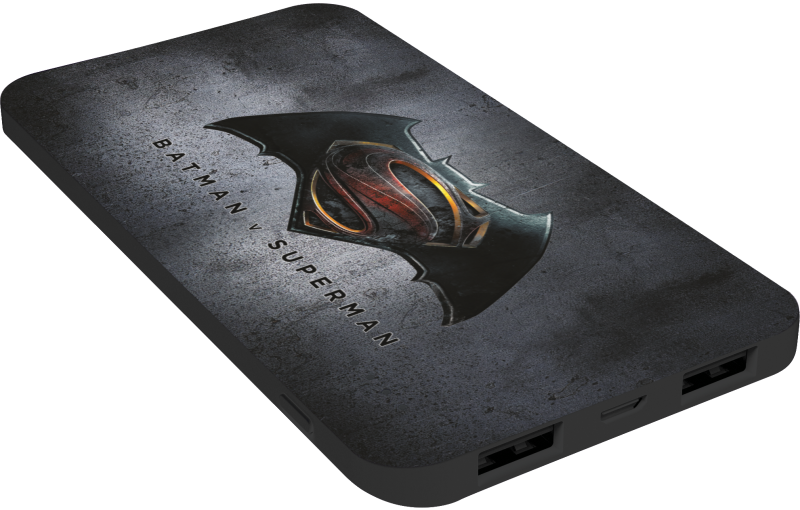 The bank can power two phones on one charge, and itself charges via a USB to mini-USB cord which reverses for Android phones. If you’re an iPhone user, however, you do have to have your own cord; likely, you already have two or three.

It’s a very slim device at only 0.35″ thick, and touts itself as having five layers of protection. It comes in two formats — a 5,000 mAh battery that can completely charge a smartphone twice (or two smartphones simultaneously) or a tablet once. That has a suggested retail price of $19.99. For $12.99, a 2.5000 mAh battery is available, though that one will only charge a smartphone once before it needs recharging itself.

The movie may not have been as powerful, but these devices have cool imagery and efficiency. Wait a minute, that kind of is like Zack Snyder’s vision…