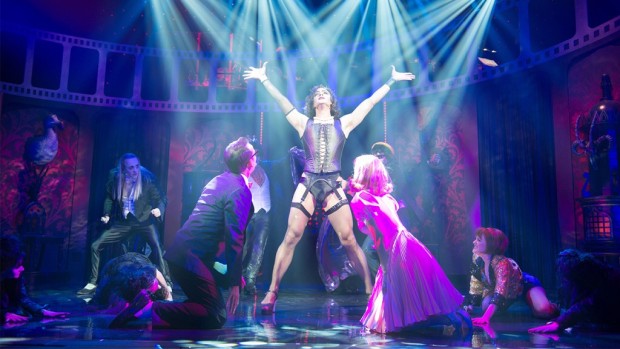 Oh, this is the sweetest way it could be done. Don’t remake the film; take your respect back to its roots — with a wild, cheesy, campy stage production. Yes, the world has caught up to The Rocky Horror Show, and where it was once transgressive, it’s now almost a period piece. But it’s still a hell of a lot of fun. You have me ready for midnight on the 18th, BBC America!

“The Rocky Horror Show is a piece of our collective pop culture consciousness,” says Sarah Barnett, President and General Manager, BBC America. “Daring, fun and funny, unabashed and wildly entertaining, we think this brilliant new version of Rocky Horror will be embraced by our fans in the lead up to Halloween.”

Inspired by science fiction and horror B movies, the rock ‘n’ roll musical tells the story of squeaky clean sweethearts Brad and Janet and their encounter with crazy transvestite scientist Dr. Frank-N-Furter and his latest muscular creation, Rocky Horror. The score is packed with fan favorite songs including “The Time Warp”, “Sweet Transvestite” and “Dammit, Janet”.

“I’m still in awe at the popularity of the show,” said Richard O’Brien, Creator and Narrator, The Rocky Horror Show. I wrote something I thought I might like to go see and it’s now lived successfully for more than 40 years in theaters around the world. Jumping on stage to bring the original show back to life has been an amazing experience. I hope audiences continue to have as much fun with it as I am.”

The Rocky Horror Show first appeared at the Royal Court Theatre in London in 1973 and following its success was later adapted into the film, The Rocky Horror Picture Show, featuring creator Richard O’Brien in the role of Riff Raff, Susan Sarandon as Janet and Tim Curry as Dr. Frank-N-Furter. The screen version boasted the longest running release in film history, which has helped to perpetuate the success of the stage production.The Rocky Horror Show has since taken the world by storm with productions taking place in over 30 countries.