Ever feel like your fandom used to just be yours? You read your comics, watched your show, built your models, and maybe had a few friends who shared your interests. It might have been hard to find them, but you were bonded for life. And now… there’s 100,000 of them, jostling you, getting the hard-to-find action figure ahead of you, and making the lines at Comic-Con impossibly long just to get a commemorative t-shirt.

And what about Star Wars? The thing makes $6.5 million on its first day, TWO MONTHS before it gets released. The first one opened in 37 theaters; the Force will be awakening on over 4,000 screens. What is going on?

We got what we wished for. We wanted everybody to know about what we loved. Consequently, everyone else loves it, too. The upside is that we’re getting the kinds of movies, television, toys, and books that we hoped in our heads would happen. The downside is that it’s overwhelming. Every celebration of fandom is crowded, and… who could have predicted this? There are too many celebrations of fandom! Like McDonald’s breakfast being served 24 hours a day, it’s just too much.

Let us take a moment to honor one of the men responsible for this fandom finally getting legal public acknowledgment, because he called it. Batman writer Bill Finger wrote a story putting this in a microcosm all the way back in 1955. In Batman #92, DC published Finger’s story “Fanmail of Danger.” I didn’t have that original issue; I read the story over and over in a black and white paperback from Signet that I picked up at a garage sale when I was six. 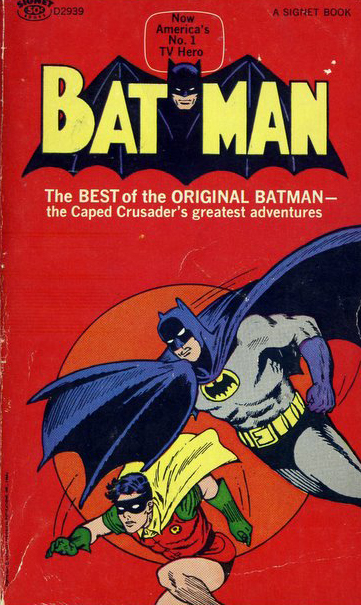 Let THAT sink in… a cheap black and white paperback designed to fit in your pocket, at a cost of 25 cents. Today that same book would be on glossy acetone free paper for $9.95. For the purposes of this article, though, I’ve found color scans because who reads stories in black and white?

At any rate, in the story, Commissioner Gordon calls upon Batman because of a huge problem in the Gotham City post office: there’s too much mail for Batman and Robin. The Dynamic Duo need help answering it all, especially because packages have to be processed with a special fluoroscope to make sure no villain is sending them explosives or deadly chemicals.

The two decide to place an ad in the Gotham Gazette classifieds looking for a secretary. It never gets printed. Instead, it’s intercepted by a receptionist there, Susie Smith, “…one of Batman’s most enthusiastic, avid admirers.” (Because superfan had not yet been coined.) She quits her job immediately to go work for Batman.

And makes things worse. Realizing that once Batman and Robin process all their fan mail she will be out of a job, Susie goes on the radio to talk about how great it is that they’re dedicated to answering each and every piece of mail that comes their way. And the deluge begins!

Susie gets her wish, but Batman and Robin are in hell. Because everybody loves them! There’s simply too much mail!

The story isn’t just about the Caped Crusaders writing letters. Finger also uses it to show them helping members of the community, as some of the letters are stories of woe or asking for help. One pleads with them to stop a young man from trying to perform stunts without proper training. And yes, there are threatening letters, too… though maybe not as threatening as some of those records.

We’re Susie Smith. We keep feeding each other stories about how cool it is to love this stuff. And then it starts feeding itself. Conventions only fuel the fire, and of course we’re not going to stop going. We want still more!

Batman and Robin solved their problem by a primitive method of “reply all.”

Did that really satisfy the citizens of Gotham? Maybe. It was a simpler time.

I’m not calling for people to back off. We love being what we are. We love knowing about stories like this — and that, coincidentally, Batman #92 was also the first appearance of Ace the Bat-Hound. This piece serves two purposes — to acknowledge a great Bill Finger story on the week that his name finally starts appearing in the credits of anything Batman-related (Robot Chicken DC Comics Special and Gotham this week alone), and to remember that, as always, we have met the enemy and he is us.

Don’t complain. Enjoy. We got what we wished for, and it’s glorious.