The phone rang. A representative from Spike TV said, we’ve got Sticky on the line for you. So hey, when you get a chance to talk to the new Blade, you take it. Daywalker’s just another name for a guy who has worn many hats over the years as Kirk Jones, Sticky Fingaz and occasionally Onyx. Right now, there doesn’t seem to be anything the guy can’t do, except maybe wipe out all the vampires in the world, because then he wouldn’t have a series.

Call him Sticky, I was told. So I did, and we had a good time, though by the time he got to me he’d been doing over eight hours of interviews. He was still gracious for the obvious questions… 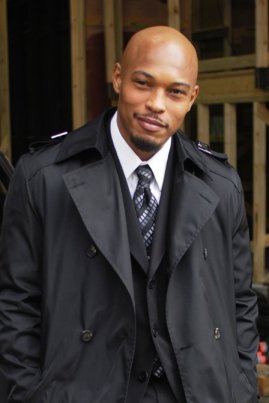 Derek McCaw: What attracted you to the Blade character in the first place?

“Sticky” Jones: Everything. I mean, I’ve been a fan since the comic books, you know what I mean? First of all, he’s a black superhero and I think we need more of those. I jumped on the opportunity to play a black superhero. He’s just cool as hell. He’s one of the coolest superheroes in the game.

Derek McCaw: Do you go back to the Tomb of Dracula days?

“Sticky” Jones: No, I think it was after that.

Derek McCaw: What’s been the coolest part about actually being Blade for you?

“Sticky”Jones: I think the wire work. They put a harness on you, which crunches your nuts up a little, but they attach the wire to you and you get to fly across the room at twenty-five feet in the air. It’s incredible. And that was so ill because I’d never done that before. It was new to me.

Derek McCaw: Did you have to do a lot of training for the fight scenes?

“Sticky” Jones: Yeah, I had to do a lot of training. But you know, it’s nothing because I’m a physical person. I’ve been in training my whole life.

Derek McCaw: How much are you influenced by Wesley Snipes’ interpretation of the role? 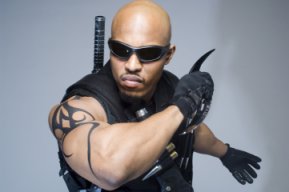 “Sticky” Jones: I’ve been approaching it from the ground up. What I’m saying is, yeah, people wonder. But first of all, I enjoyed all three of the movies. I enjoyed Wesley Snipes’ performance, so I’m not really subtracting anything from it. I’m just adding things to it.

Derek McCaw: You seem to allow a couple more smiles than Wesley did, especially in the last movie. Do you ever want Blade to lighten up a bit?

“Sticky” Jones: Yeah. You say I smile more than he did? He’s half-vampire and half-human. I’m embracing both sides, the human side as well. You know, he does have a sense of humor. He does love his job. He actually enjoys killing vampires. It’s not like he always does it angrily. Sometimes he enjoys it.

“Sticky” Jones: Well, I just want him to be well-rounded. I want people to know his backstory, his front story, his current story. I just want people to really get into the character. On a series like this, it’s a lot of action, but to compel people to come back every week, I don’t think the action is going to do it. The character is going to do it. The character has to be deep, have depth to it. It can’t just be a mean face and he kills vampires every second and that’s it. He has to have some kind of substance.

Derek McCaw: Do you think that growth is happening? Have you done all thirteen episodes?

“Sticky” Jones: No, actually we’re on number twelve right now. Actually, the episodes get better and better as we go along. You saw the pilot, right?

Derek McCaw: Yes, I did.

“Sticky” Jones: I think my performance gets better after the pilot. I think I married the character totally. I get the perfect voice and everything. I think with the pilot, I was just getting into it. We just did the honeymoon. By episode three, now we’re living together and everything, you know what I mean? We’re learning each other’s habits, so now it’s natural.

By episode five and six, we’ve been together for five years already. We got kids and a white picket fence and a dog. By episode twelve, we’re experimenting. We’re inviting other couples into the bedroom and everything, you know? 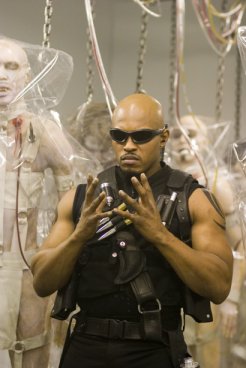 Derek McCaw: Okay, Blade is kinky. It’s hard to imagine him with a white picket fence. But is that something he wants? Does Blade want a normal life?

“Sticky” Jones: Yeah, he wants a normal life. But he’s accepted that this is his life, this is his calling. He’s the special Daywalker. It’s his calling to kill all these vampires. Humans, to vampires, are food. So Blade is like a vegetarian.

Derek McCaw: Had you read any of (show creator/writer) David S. Goyer’s or (writer) Geoff Johns’ comics before you got involved?

“Sticky” Jones: Well, I was definitely a fan. See, I’m a Marvel fan. And Geoff Johns writes for DC. He did a great thing, bringing Green Lantern back and all that, you know what I mean? He’s on JSA. He’s a great guy and his work is spectacular, but my comic book company is Marvel, you know what I mean? I think Marvel should abduct him and bring him into their realm. They should put him on X-Men or something.

Derek McCaw: Well, they did have him on Avengers for a while.

“Sticky” Jones: Avengers is cool. Now the two are together, did you know that? In the Civil War. That’s hot. I really liked M Day. I’m a comic book nut. I get my comics every Wednesday at this place in L.A. called Comic Smash. I got my pull list. They pull all my comics for me, because sometimes I can’t come in for a whole month. They hold every issue for me.

Derek McCaw: You’ve got a hip-hop background. If Blade recorded an album, what kind of music would it be, and what would his rap name be?

“Sticky” Jones: Probably Daywalker. And it would be like hard hip-hop mixed with thrash.

Derek McCaw: Do you think you could improvise Blade’s rap for us?

“Sticky” Jones: Improvise Blade’s rap for you? It would be like “I wanna kill you!” (laughs) It would be kinda rock and roll, you know?  He’d be a rock star. Robbin’ and on top of a cop car.

Derek McCaw: If you could bring in any Marvel character to be a guest star and take on Blade, who would it be?

“Sticky” Jones: Well, I’d have to beat the crap out of my favorite character, which would be Logan.

“Sticky” Jones: That would be crazy. We’d sell a lot of UFC tickets with that one. Plus we both got healing factors. So that would be a great fight right there, yo.

Derek McCaw: You’re also a director. You’ve got a couple of projects coming – Caught on Tape and A Day in the Life.

“Sticky” Jones: Yeah, both of them I wrote, produced and directed. The interesting thing about these two movies is that all of the dialogue is in rap, from beginning to end, every ounce of it. 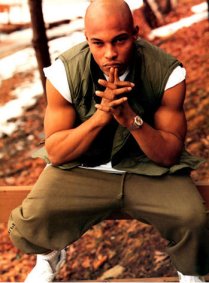 “Sticky” Jones: In a sense. But it’s got more action and drama. Hip-hop opera sounds kind of softish to me.

Derek McCaw: What’s your favorite job? You’re an actor, a writer, a musician, a director…

“Sticky” Jones: My favorite job is creating. Just creating. Whatever that encompasses.

Derek McCaw: Any final words to get people to watch Blade?

“Sticky” Jones: It only gets better as it goes on. I’m not just going to say it’s great because I’m in it. I’ve done a few projects that I wasn’t so proud of, like Leprechaun n the Hood. I’m in that movie. I think that movie’s the worst movie on the planet. I’m telling people Blade is incredible. Trust me. It’s not even like television, it’s like a movie. It’s action, good acting, drama, effects. And the episodes only get better as they go along. We’ve got incredible guest stars like Bokeem Woodbine and Randy Quaid. Get this – the original Shaft, Richard Roundtree, plays Blade’s pops.

Derek McCaw: Take us out.

“Sticky” Jones: The one word song? Two words actually. “KILL YOU!” That’s going up on the internet, isn’t it?