When I was a wee lad – or wee high-school student anyway – one name in fantasy artists stood above all others, mainly because he had a sense of humor nobody else had. You knew the twisted faeries and other fey creatures of Brian Froud in one glance. A few years later, Froud joined his imagination to that of another genius, Jim Henson. Together they created fantastic worlds in the films Labyrinth and The Dark Crystal. Their collaboration worked wonders, and though they’d intended on more, Henson’s untimely death cut that dream at the knees.

This week, both those films get a sumptuous re-release on DVD, and to honor that, Froud took some time out of his schedule at Comic-Con to sit down and talk about the films, the collaboration, and a bit about his imagination.

Meeting Froud is like meeting a long-lost uncle you wished you had somewhere in the family tree. Humble and charming, he opened up easily in soft tones that could make you think this guy has spent some time in other worlds and come back for the better for it. He only grew wistful when speaking of Henson; it’s clear Froud still feels the loss of his friend, but is proud of what they accomplished together.

Brian Froud: Let’s have a go with it.

Derek McCaw: We’ll start with the convention itself. You’ve had some experience with it before, I’d assume…

Brian Froud: Yeah, I’ve been coming here about five, six years or so. But it keeps getting bigger and wilder. It’s always interesting.

Derek McCaw: We’ve got the DVDs coming out in mid-August…what kind of involvement did you have now, coming back into this after a couple of decades?

Brian Froud: The interesting thing is that these movies are being constantly re-released, on video and DVD. People just really respond to them. It’s fascinating to be doing another version of it. So they asked me if I’d do a commentary on both of them. (laughs) It’s probably because there’s nobody else around…just me, surviving, surviving…

Derek McCaw: How did it feel to go back and watch it?

Brian Froud: In one sense it’s a bit spooky. I’m always a person who wants to go forwards, not backwards. However, I’m intensely proud of these two movies that Jim Henson gave me the opportunity to collaborate with him. I know Jim himself was really proud of these films.

However, to review them is like a drowning man, seeing your past life in front of you. But I had a great experience doing the commentary. I was very nervous about doing it, but I went to Peter Gabriel’s recording studio in England. It’s in an old mill. Beautiful place, he has a beautiful studio there. They set up a little room for me. And it was very nice, there was a nice comfy chair, and a nice carpet and a table lamp, a nice bit of a folding screen and a television.

I thought this is really quite lovely, but I felt that something was not quite right. And I said, “what’s under the carpet?” They said, “well, have a look.” So I picked the carpet up and underneath was a plate of glass, because it’s right in the middle of the mill. You could see the water rushing underneath, and I thought, “oh, dear. I was hoping to be more stable and grounded to do this.”

But I took it as a metaphor, that I have to re-engage with this. I sat there. I was going to do both of them; I was going to stay the night there, because I was really most worried about being overcome with emotion, I think. Could I really deal with it? I’d had a word with the sound man. It was just me and the films and the sound man. I said, “I’m not sure I can do this, because I was never there,” and he looked at me horrified. (chuckling) I said “I don’t mean it that way,” in case he thought I was some strange interloper. What I mean by that is that it was rare that I was on the set. I was on the next set, getting that ready. Or I was in the workshop getting the puppets ready for Jim. I didn’t see a lot of the actual filming.

Whereas if Jim were here, he could tell his stories about what was going on on the set. So I thought, do I have anything to say? I didn’t know. And I sat there, and they just ran the film, and I found that I’d talk. I just tried to talk about what it felt like, what my emotions were, or what was going on in the story…

Derek McCaw: Did anything about watching these films surprise you?

Brian Froud: How fresh they are. How they don’t date. I think that’s quite extraordinary. I think it’s because we made both the films — Dark Crystal and Labyrinth — they were the films we wanted to make. Although they were in their time very high budget – extremely high budget – they’re not like modern films which seem to be driven by accountants. These films were driven by Jim Henson’s passion for doing something like this. He gathered together groups of people who were really creative. He loved creativity and encouraged it. So we made the films we wanted to see ourselves. Which oddly enough gives it its timeless quality. It wasn’t constrained by anything. They grew organically. They sort of subliminally contained a bit of every one of us.

Dark Crystal we started with nine people in a room in New York. When we finished, we had three hundred and sixty people making it. But it was a collaboration among all of us. Especially when I was designing and working with people in the workshop, I wanted their collaboration. I wanted their creativity to be a part of it.

Derek McCaw: Have you been able to recreate that feeling in working with people since?

Brian Froud: No. (laughs) But I haven’t really been asked. I think our approach in the workshop was very open, and I remember a couple of years ago talking to the WETA workshop people. As they were describing how they work in their shop, it sounded so familiar. And it was that very open quality that Jim brought to these projects.

Derek McCaw: Who do you think influenced you in your style and your imagination? Who gave birth to Brian Froud?

Brian Froud: Oh, I was a great fan of an English illustrator called Arthur Rackham. He was turn of the century. He did a lot of fairy tales. He was very influential in my work. He just somehow captured the spirit of the land itself and trees and other creatures. Originally, Disney wanted him to design the seven dwarfs and everything, at least at one time. It’s the landscape I live in that influences me.

When Jim had asked me to do the film, and he came to visit me where I live in England, he said “I want some of this quality of the landscape in the film.” Whereas where I live it’s very green, we made it sort of brown, more of a desert, but it still has that quality to it.

Derek McCaw: Is there anyone now coming after you that you admire, or you wish you could work with?

Brian Froud: I don’t know. I think there’s so many people. What’s so interesting about Dark Crystal is the number of people that come up to me and say, because of it, they got into the movie industry, or because of Dark Crystal, they took up art. It’s always a creative response to it. A lot of people, it’s just emotional. So many people responded in a creative way, and Jim would have been delighted by that. His legacy is about creativity.

We were pioneering so many techniques. It was a bit crude in the beginning, with bicycle cables and bits of string and tape. Eventually we moved more into animatronics and electronic stuff. I was really proud that last year when the Academy of Arts and Sciences showed Labyrinth as part of a big exhibition on animatronics. That was the climax to the whole thing. Not only haven’t the films dated visually, but we were so far ahead right there that it’s been a long time since anybody could catch up with it.

Especially in Dark Crystal, there’s an immediacy to what you see on the screen. People have really struggled to capture that (sensation) now. With the digital age, there’s a danger that digital stands in the way. Finally, that’s beginning to catch up. You need to get the emotion back into it, and (digital) is beginning to do that now.

If Jim was still alive, he would be doing that. He was a pioneer in technology. He was always finding out about things. It’s been wonderful being part of history. When we did Dark Crystal, it was a pure puppet film, but he would be doing anything, anything that would come along, just to tell the story. I’d love to be involved in something digital. We’ve been trying; we’ve been trying. We haven’t quite managed to do it yet, but we’ve been talking to a lot of people.

Derek McCaw: Well, off and on over the years it’s been rumored that we’d see a Dark Crystal 2…

Brian Froud: Yes. We’ve certainly been involved with a script and I’ve been designing. We’re hoping that it’s going to go.

Derek McCaw: What about books? A lot of us have been introduced to your work through your art…are you working on any new print projects?

Brian Froud: I just finished one which is in one sense a retrospective of my work, covering thirty years of me painting pictures with some new stuff in it. It’s a big book. There’s all sorts of little things going in it.

It’s an exploration of my art, but also gives you the emotion, the feeling of what it is to experience the art. I take people on a journey, not only in linear time back to when I first started up til now, but it’s also a journey of entering into the pictures and into the thing that I do, and am most passionate about, which is faeries.

Derek McCaw: Why is that the thing that you’re most passionate about?

As soon as I did that, then I started to draw trolls and faeries. They’re a direct response to how I feel about the world. 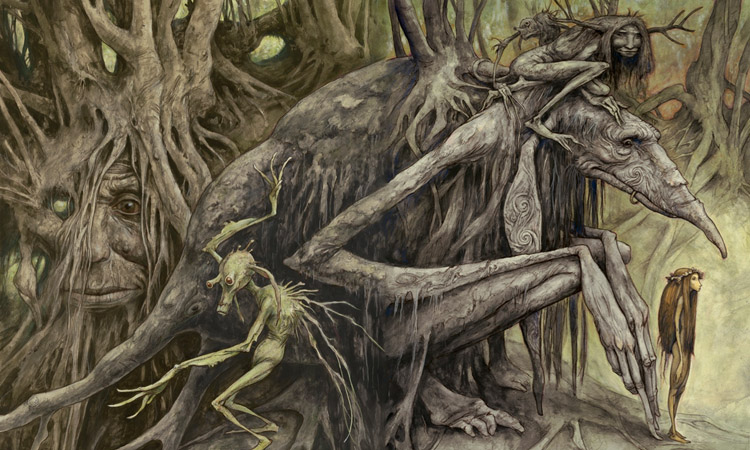