I’m rarely so torn when it comes to my opinion about a game. Albert and Otto, purported to be a genre-breaking platformer, really has me on the ropes.

About ten minutes into the game, picked up for $4.99 on steam, I found myself wondering whether I had started playing a computer game or one that had been emulated from a Super Nintendo cartridge, with squishy controls and sound design that really got lost in the shuffle. 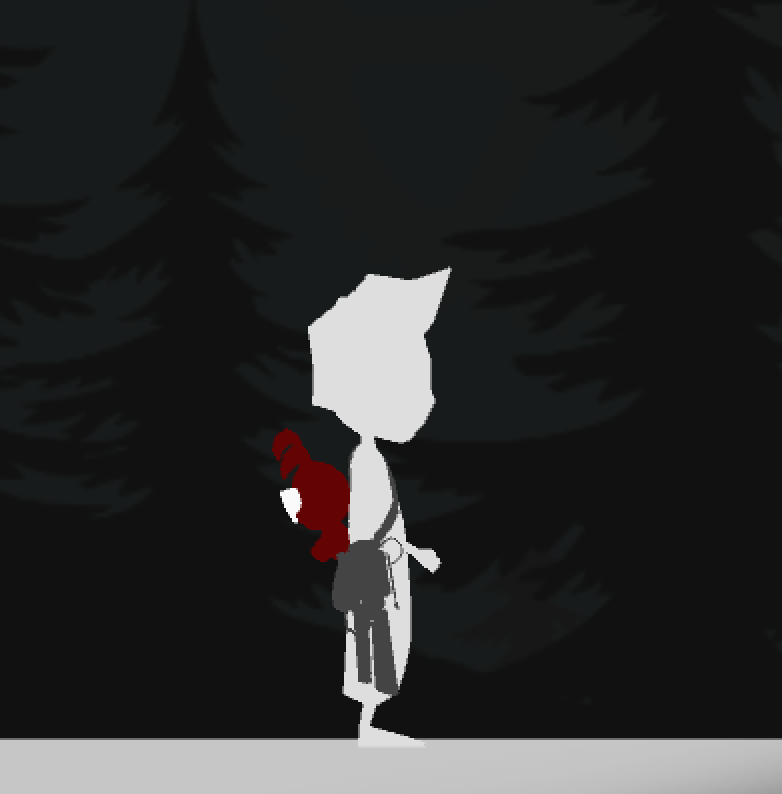 Of course, he is reportedly not the hero, though he is apparently out to rescue his sister. 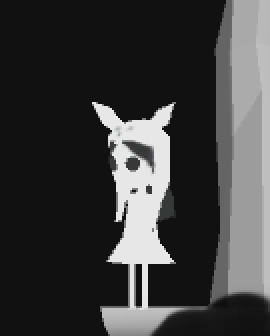 Even though there is no way to organically know that she is your sister. Keep in mind that everything not gameplay related was gleaned from game updates and the Steam store page. Unless I am reaaalllly not paying attention, the game does not offer up any information on who you are, what is happening, or why. Doesn’t that sound like a riveting premise? Is it possible that I skipped an intro? The girl’s name is Anna, but I only know that because I read the news on the Steam store page.

Not that that’s a bad thing. Lots of classic games had flimsy plotlines, if any: Rygar’s Castle. Dig Dug. Goldeneye.

…but Albert and Otto seems to exist in a vacuum. A very slow moving vacuum.

Though the game takes place in what seems to be a dream world, with some clever traps and puzzles to solve, it reminds me at times of A Boy and His Blob, except without the jellybeans, blob, or shape-shifting. Also, because it seems to be the current bailiwick, there are lots of glowing, spinning shards to collect, the purpose of which is a complete mystery. Hit escape and you can see a whole litany of items to collect- but you have no idea why you would want to constantly risk death to pick them up. I tried to find some sort of key map because there had to be a reason for all of those icons, but I couldn’t find one- and the control layout displayed on the pause screen is an Xbox controller.

So you know what? I stopped taking the risk…there is just no exigent reason to die over and over again to collect something with no clear purpose. Without getting too nitty gritty into actual gameplay, “shardgate” (I’m quoting myself from what I screamed last night) is just a small piece of the delicious looking yet surprisingly bland lemon creme pie pie that is Albert and Otto.

See, it starts as your typical jumpy, pushy, shooty platformer, where you have to place something on a platform to lower a door, etc. From the description in the Steam store, you’d think you were getting into a visceral storyline where you guide a mysterious anti hero through trials and travails to rescue his sister from an unknown malevolent force. Well, you don’t get any of that- there is no story to speak of. You don’t even know who you are, who the other person is, and why the hell you are carrying a bunny around. Again, not 100% necessary to know, but why even pay it lip service if the customer is left in the dark during the game?

Imagine you are playing a game where there is no facial expressions, speech, text boxes, or even emotive gestures. The only way to give directions, therefore, would either be through incremental and obvious physical hint (a box next to a pressure plate), or through brute force (a sign with a graphical representation of exactly what mechanic is in play). If there is one thing that will immediately take you straight out of the atmosphere of a game, it is a picture of a mouse with two rectangular buttons, and one of the buttons is red. 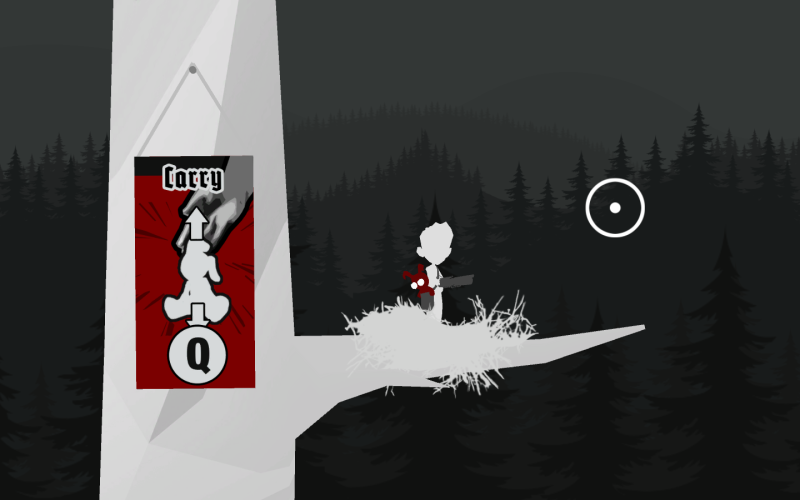 The game is rather gorgeous, and the world, though 2D in presentation, has a shocking number of layers of action and consequence- such as when a boulder falls and you must depress a maddening sequence of platforms to keep it from impaling you with bamboo spears, or whatever they are. 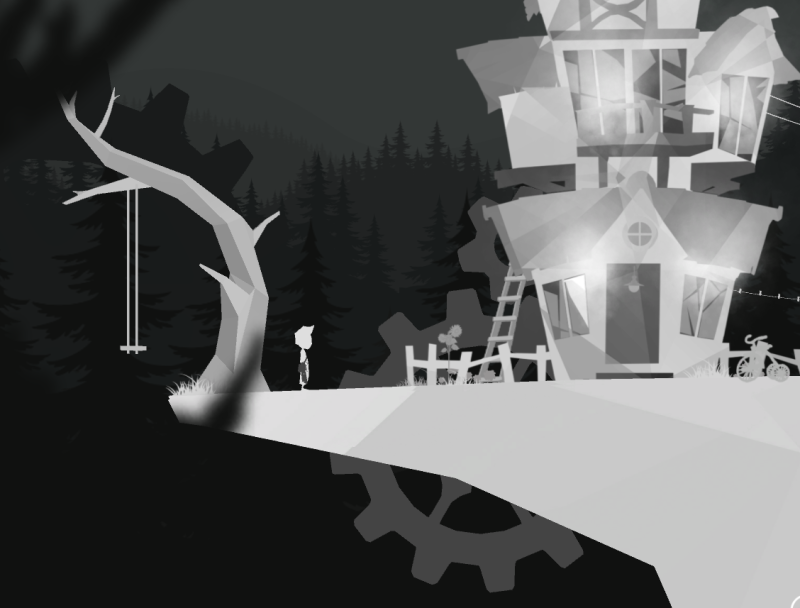 The same thing that is the most attractive aspect of the Albert and Otto universe is also the most frustrating. See, the camera centers on the character…mostly. The camera also seems to focus on the character when the character is actually the least important part of the environment. If there are mechanics at play, where something is going to fall and depress a switch and kill you, but you cannot see that thing, well, you have absolute anarchy. That is the heart of my biggest issue with this game. Nothing seems to make sense in this game- to the point where I feel like I really missed something. A menu I can’t find, a cutscene I skipped, a “help” menu that has just eluded me. This is minimalism to a fault.

There is an art to playing games like this. There is a skill, a level of patience, plodding determination, and wit required to figure out a puzzle. What a game like this should not be, however, is the steady application of the scientific method to get through a series of simple but obfuscated triggers and switches, with death after death leading you closer- or further away- from the answer. I rarely complete a puzzle of any type and walk away more frustrated than I was before I solved it. The makers of Albert and Otto found the formula. They did it. They won.

The graphics, while employing a unique art style and definitely displaying a convincing otherworldly milieu, fall short in many areas (often looking like ragged paper cutouts a la South Park season 1), and sometimes look as if they were an afterthought rather than a stylistic choice. The controls suffer similar shortcomings, such as attempting skill shots at giant birds that come out of nowhere to ruin what could have been a great first time go at a complicated trap. Because that is a great game, you know, that one where you just emerged victorious from a challenge and were plucked out of the sky by an enemy that just popped in from off-screen, but you couldn’t shoot it because your inputs work at an underwater pace, but the giant birds, rats, and good ol’ gravity are as agile and fancy-free as Danny Effing Kaye.

The birds, by the way? A jumble of black and gray polygons. 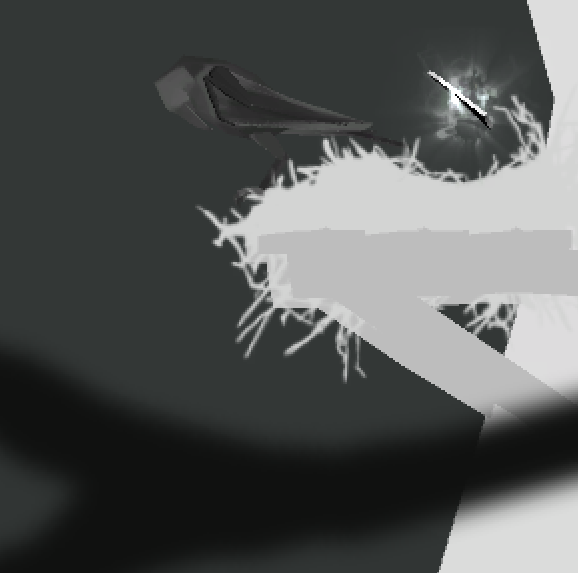 There are also situations that defy the logic of the game itself and wreck the consistency that makes puzzle games so endearing. To wit- a scene where you must float across a river on a sheep (which I guess I needn’t have slaughtered for just this situation), bypassing a tire swing that I thought was the way across. See, jumping to the tire caused me to plop fatally into the river because the tire, which was clearly in the foreground, was not a prop. One screen away, a fire burned, but THAT was fatal- I died immediately as I attempted to run past it. Is it necessary to fail in order to succeed, and not only fail, but fail just because? The answer is no, just in case you were wondering. Oh, sorry, I was talking about real life right there. You are definitely going to fail in Albert and Otto. Many, many, many times, just to figure out how to solve a puzzle, or what the hell the point of it is, or to figure out what you can manipulate and what you cannot. You won’t fail because you are trying to make that long jump and need to time it, you are going to fail because you don’t know what you are supposed to do. There is a huge difference, and it’s those little things that can ruin a game. Not that this game was ruined, but difficulty for the purpose of being difficult is not a virtue.

The killer of this whole review is that Albert and Otto has a lot of heart. It is clear that this game means a lot to who made it. Despite lackluster sound effects, cloying difficulty, sometimes muddy graphics, and an ongoing battle with lugubrious controls, Albert and Otto is one of the more engaging games I’ve played recently. It lacks the speed, responsiveness, gross wit, cursory yet concise story, and sadistic difficulty of Super Meat Boy, but it has a quality all to its own. Yes, it IS fun.

Despite a pointed lack of balance in difficulty from scene to scene, it begs you to play…regardless of the fact that the only promise it makes is that it will infuriate you if you accept its invitation. There is a sick desire to go back for more, get the fist to the stomach that you deserve, and then shut the game down again.

But just barely. It has a lot of heart, and playing it is as much a labor of love as making it must have been. Honestly, I’m giving it a nudge because how much little patience I have with games like this. Avid platform players will likely enjoy it, but those looking for more balance, faster pace, story, or a more casual experience should pass.

It is entirely possible that I just don’t get this game. Nothing about it seems exceedingly difficult, and that is the infuriating thing about it. It is at once pitifully easy and hair-rippingly difficult, but I just don’t know if it’s supposed to be like that. For the price, I think it’s worth a shot. Support an indie game studio and check it out, and then send me an email and let me know what you think.