I have noticed recently that there is a whole genre of games that I haven’t tapped. I mean, what am I even doing here? I review games, right? I should be open to all kinds of games.

The genre of which I speak is the anime-styled adult-oriented adventure game. Now, I should say that I have elected to not play one of the more risqué titles in this category, because this is a family website.

So, enter Hustle Cat. At its base, like the other anime-styled graphic novels, is about navigating a complicated, inscrutable social maze of impossibly attractive, skinny people. Don’t believe me? 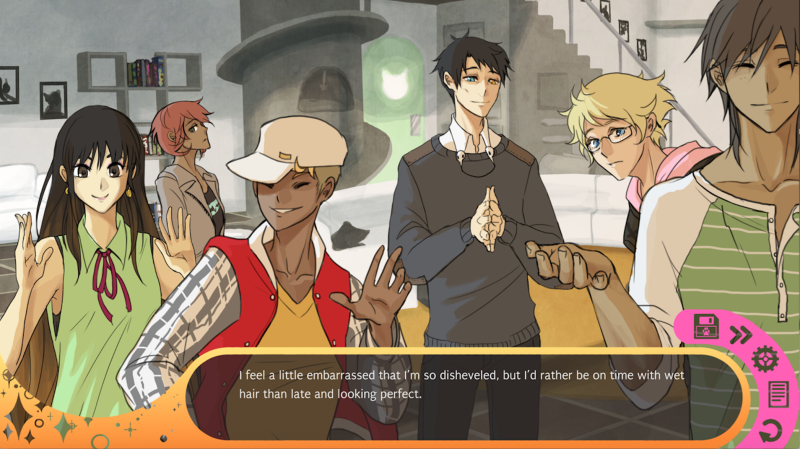 That is (almost) the entire cast. Not a single loose tooth, pimple, or hairy nipple in the bunch. But I digress. You play Avery, an impossibly chiseled and statuesque young man (or woman, or neither) who is pulling couch duty at his aunt’s place. While stumbling around town, he summarily stumbles into a place called “The Cat’s Paw”- a cat café.

Now, I hear that these cat cafes are all the rage in Japan. I have no reason not to believe that, other than the cold hard fact that the idea is absolutely ludicrous, and the same people who brought us Kabuki, Seppuku, and hours-long tea ceremonies could not possibly have contrived something like the cat café.

Now, in case you were wondering, this game does not just have a clever title. It is literally filled, front to back, with kitty cats. 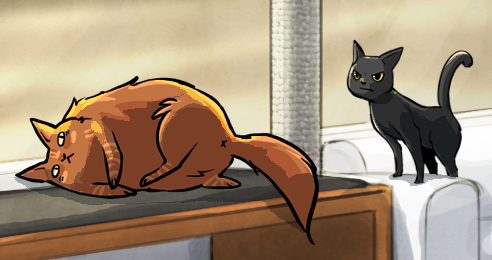 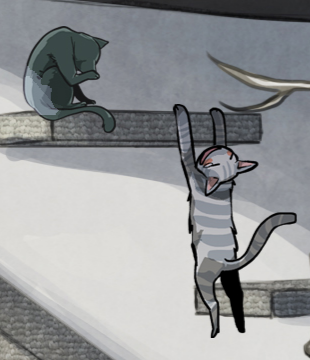 Oh, and this one. This is your actual cat. 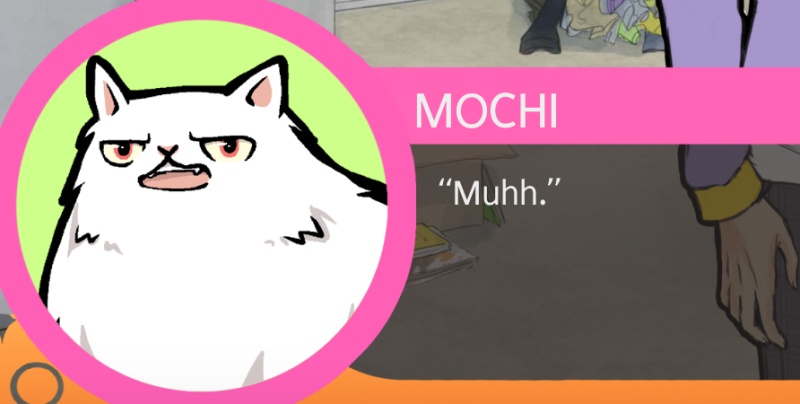 Also, full disclosure: this is MY actual cat: 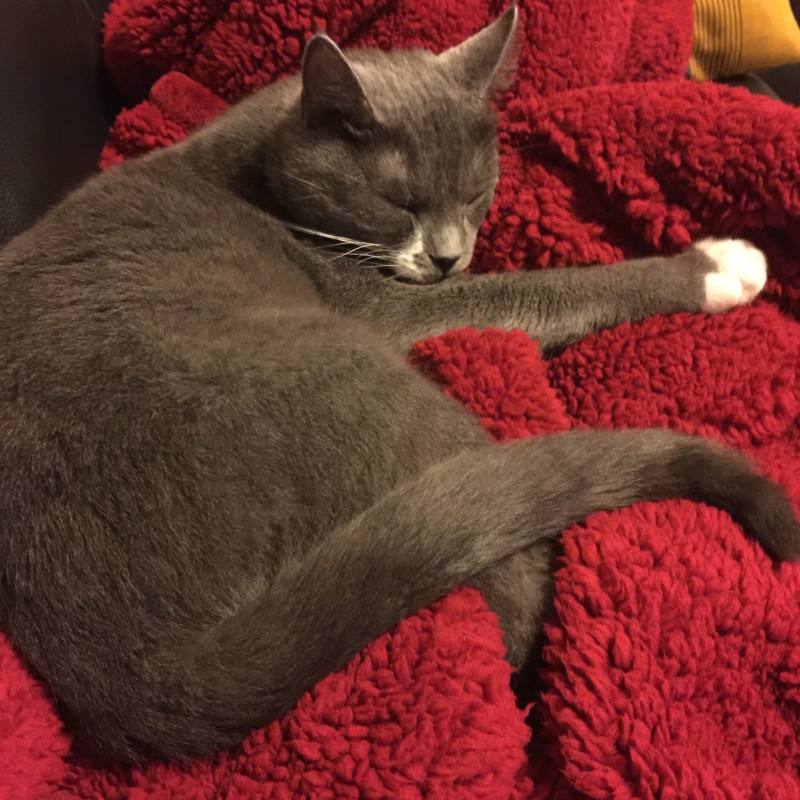 His name is Tiberius, and he most definitely does not talk to me. I obtained Tiberius from a shelter two days after I first played Hustle Cat. The two events are unrelated…I swear.

Strangely enough, though, this game is actually not about cats. Not at all. Sort of the same way that zombie movies are not about zombies. In fact, I’m not 100% sure that this is even a game. The essence of this game is much like the essence of setting a new vibration pattern on your iPhone’s silent ringer. That is to say, you tap your way through it.

That’s it. You tap the dialogue box to further the dialogue. If you do not tap, nothing happens.

Oh, wait! No! You don’t have to tap the dialogue box! You can tap ANYWHERE ON THE SCREEN…to advance the dialogue. So don’t try to interact with the environment. There is no environment.

So after about forty minutes of tapping stalled only by your ability to read text, you will find yourself on the top floor of A Cat’s Paw, making the second actual decision you have to make in this “game”. 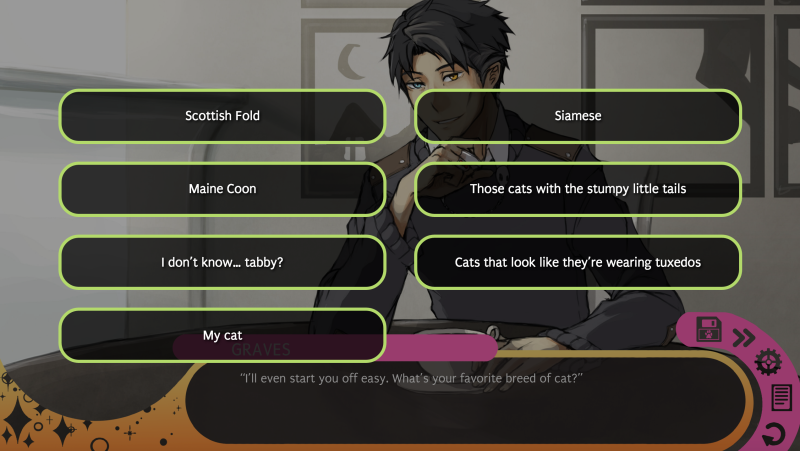 That’s right. You are an ancillary body to this entire experience. And barely, at that.

At this point in my play through, I started to realize how horrible of a mistake I had actually made by starting this game. There is something seriously wrong here – not because of how utterly insipid and boring it seems to be, but the fact that I am still playing it. I realized that I had somehow been sucked into this Kafkaesque nightmare. A nightmare not where you discover something horrible is happening, but one where you continue to delve deeper and deeper into the nightmare because you refuse to believe that nothing is going to happen, so you continue to search and scratch, and ultimately go completely mad with frustration and disbelief. I believe that this is a specific layer of hell that Dante visited…right next to the one where two lovers married, but weren’t supposed to.

Visually, the art is repetitive and there is no animation. Yes, it is more of a graphic novel than anything else, but you find yourself sleepily meandering through the story with little to no influence on it. I am typically not a huge critic of the art in games, but it gets a little odd when there is a character who is perpetually donning a rubber glove. 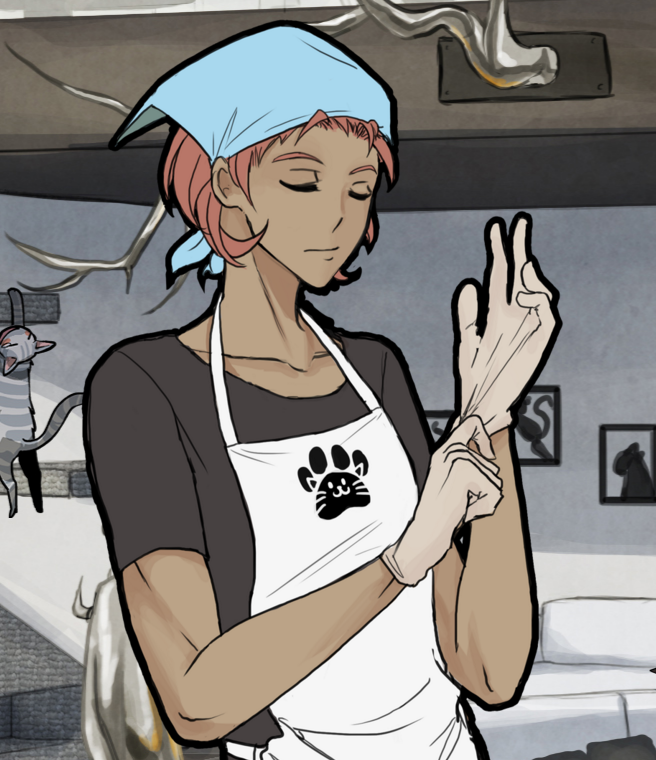 …and the anime-styled graphics really betray the normally inscrutable social cues. Like, say, when a girl makes a face at you like this: 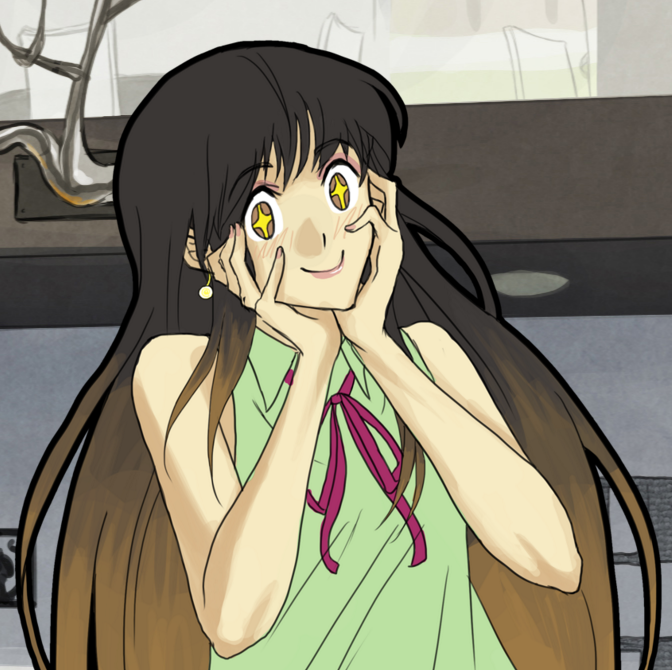 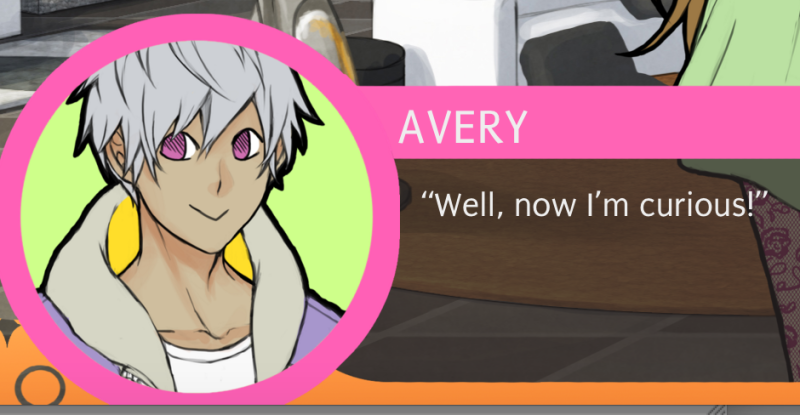 It’s more than a little on the nose.

The pacing is also way off. After roughly an hour of playing, and really giving an honest effort, I find myself still clicking through parts of the story that I feel should have happened before the game started. You know, parts like you getting to know every person who works at the diner, with tediously plodding dialogue and more subtext than a Vince Vaughn scene study.

Now, let’s step back and take a truly objective look at this entire ordeal. We are dealing with a specific type of game that I’m assuming has a specific audience. I have no interest in insulting the people who enjoy games like this; rather, I am utterly mystified at the entire idea of somebody enjoying this game. The majority of my review thus far has been concerned with the actual substance in the game…what precious little there is. I actually feel as if a title like this seeks to hide its misgivings with…even worse misgivings.

Speaking of needs, Tiberius does not seem to realize that he doesn’t have…needs… anymore. As I play, he is trying to make this plush blanket squeal like the Scarlet Pimpernel. That’s his favorite pastime. 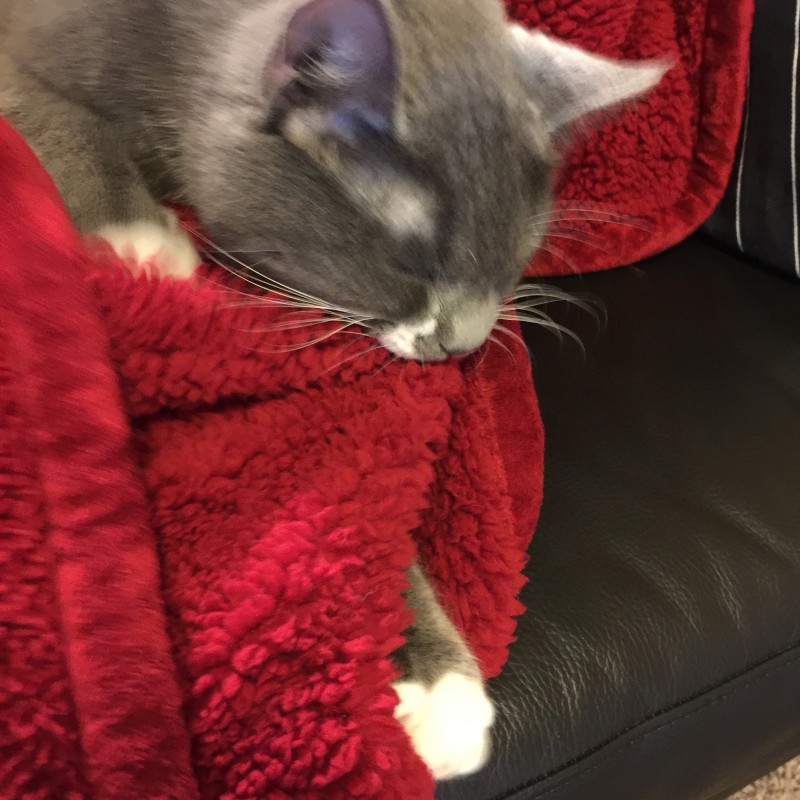 The shelter said his favorite pastime was snuggling. That was a partial truth: it is actually his second favorite. His third favorite pastime is attempting to eat USB cables. Number four is waking me up at night by kneading my neck with his claws. Rounding out the list at number five is drinking from a running tap, which is apparently the only way he will drink water.

Getting back to the game, perhaps it is more appropriate to demand an intelligent script in a cat-based adventure game? No, because it isn’t an adventure game at all. It is really a young adult reading game. So perhaps that is why the script is so simplistic and vapid.

Feeling utterly bamboozled, and just having learned that the brown cat’s name is Hash Browns (after five solid minutes of saccharine, dripping, awkward conversation), I bear down and play more…for some reason.

And then this screen pops up. 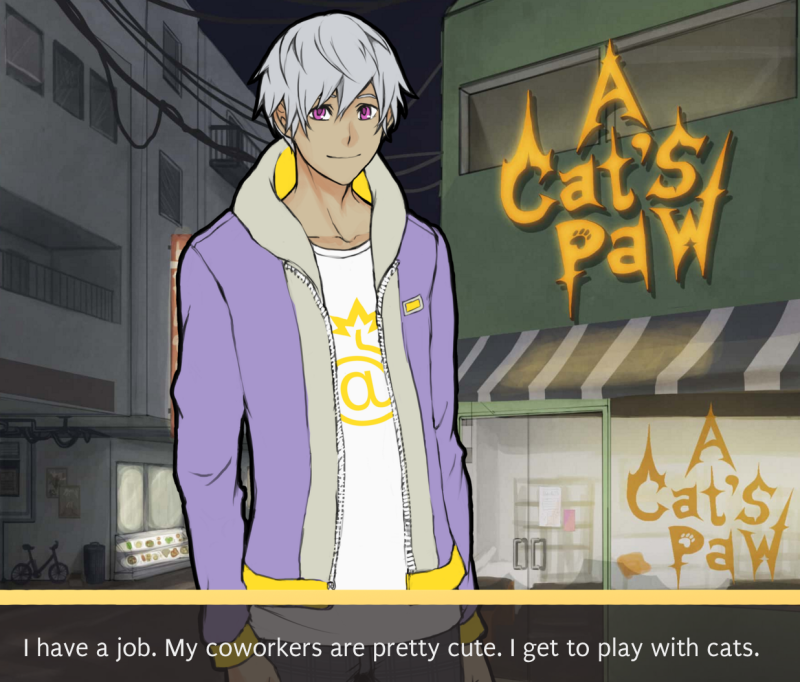 And that’s about it. The most self-aware game I have ever played in my entire life, summed up in a vicious blow that snapped me right out of my existential quandary.

This is a game about a guy who works with cute people, and gets to play with cats.

Torn right out of reality, I was thrown straight back into my own nightmare. I had an epiphany, which makes about four for this game so far. I realized that the reason why “choose your own adventure” books have such limited playability is because they are ultimately incredibly limiting. There is only one way to go, one page to flip to, one path to take- all disguised as choice. I have been thrown straight back into my existential quandary where the few choices available have only resulted in the mere illusion of free will. Is there a puppet master or simply darkness? What is behind the curtain? Did the Tin Man need a heart, or was he just fooled into believing that he needed one in the first place? Was Kilroy actually there?

For a game that is driven entirely by its script, it also suffers from it as its weakest element. Surprisingly limited, you find yourself reloading because you did not choose the “correct” path and quickly find yourself cowed into going exactly where you are supposed to. In a world where the gaming community correctly demands games that deliver an open experience, Hustle Cat is an anachronism; a game out of time that embodies a literary style that is decades out of fashion (rightfully so), and that pays poor homage to it, to boot. With a repetitive soundtrack, mind-numbing “gameplay”, and a story that absolutely trudges along, I cannot, in good conscience, recommend this to anybody.

If you are looking for a nearly endless graphic novel about a social outcast who is constantly in shock for some reason, but is too dumb to just walk away from a building filled with talking cats, this might be the game for you. If you are an adult human being, with eyes to see and a brain to think, I highly suggest looking…almost anywhere else for entertainment. Ever tried origami? I hear it is very relaxing. Also, they make these coloring books for adults now. Those are probably pretty cool. Or watch a movie, like Philip Seymour Hoffman’s tour-de-force, Capote. Thats what I’m doing with Tiberius tonight. 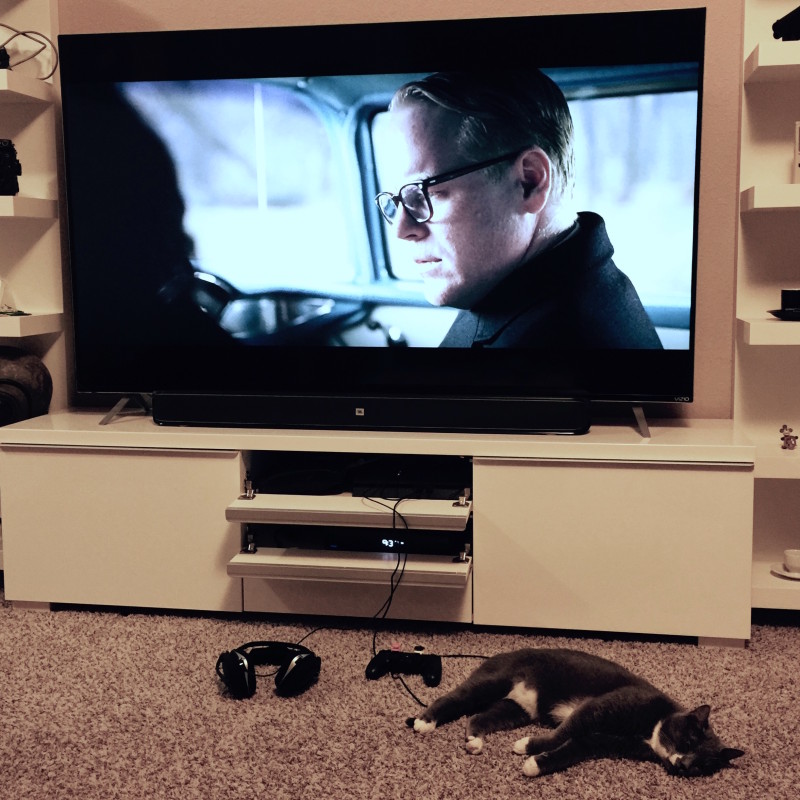 He thinks its boring, but what the hell does he know about great acting? He’s a freakin’ cat.