Real talk. I didn’t want to like this game. I played this game as a favor for a friend who really wanted to read my review about it. When I checked it out on Steam, I saw how many reviews it had. Well over a thousand.

A thousand (actually more like 3,000)! I generally limit the games I review to those that have fewer than fifty reviews. I figure we should let the big muckety-mucks in fancy office buildings with triple-digit game review budgets worry about the fancy titles.

Going into it, seeing a game that had overwhelmingly positive reviews, I felt like the work had already been done.

You know that’s why people don’t read movie reviews, right? It’s the reason why people are still able to enjoy superhero movies, new restaurants, and Jason Statham. They go into things without preconceived notions. Raw emotion and reaction are better gauges of sheer entertainment value than a 3,000 word review published in The New Yorker. Hell, or Gizmodo, or whatever pap the kids read these days.

To that point, I almost never read other reviews before I play a game. Best case? I see that a game has about 12 “mixed” reviews. That’s some gristle I can really chew. Before I give you any more reason not to read my own column, let’s get into the game.

Enter Reigns. Predictably, Reigns starts in minimalist and bewildering fashion. It is a simple game that involves a series of yes/no questions.

No, wait. Not yes/no, but more like left/right. Up/down. Um…this way/that way? 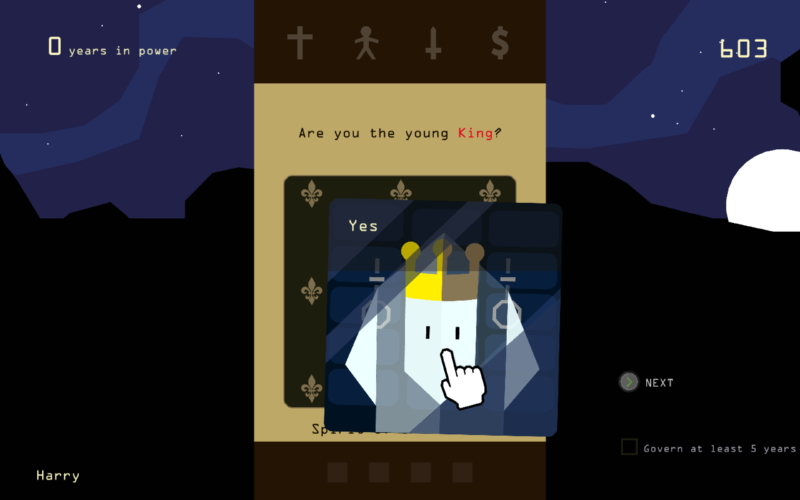 Regardless, after talking to a ghost of sorts, I was dead after about two questions. Something about a feast on my birthday? 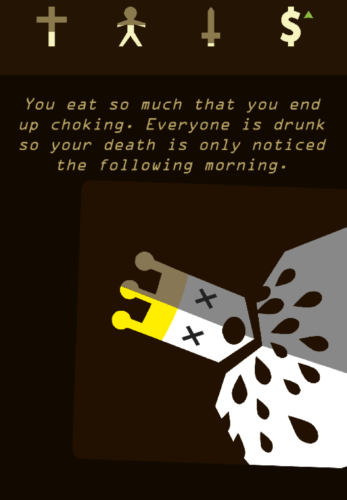 My immediate impulse was to deal with it in classic style. Rage quit, uninstall, submit a complaint ticket to Steam to get my money back, and then reinstall Windows just to make it all fair.

This was different. After dying, I just…sort of…continued playing. The game kept going. Not in a Canabalt sort of way, or Super Meat Boy (I mention that game a lot, don’t I?) sort of way. It did not restart me at the beginning of the stage. It did not take me back to the title screen. No. When you die in Reigns, the game continues apace. No loading save games. No debuffs.  Much like real life, death is a part of the process…not in a regenerative way, but in an iterative one.

What lies beneath Reigns’ gruff exterior is an unimposing yet complex deck building card game. Many of your decisions add a new card to the deck that persists throughout play. Some good, and some bad…which is not surprising because you die unceremoniously about every four minutes. At this point, I cannot tell you exactly what cards are in my deck, but that delightful bad memory-based mystery often presents itself in the games I play.

However, ceremony is not what is important about death in Reigns. Death is about the continuance of your own experience. As you move the reign of your family’s bloodline (get it?) you are presented with a series of challenges. The challenges persist until you meet them, which sometimes takes several generations of wrong answers, seemingly pointless fencing matches, and untimely deaths at the hands of a starving populace.

How you live (or die) earns you a nickname that persists along your family’s timeline, which you can view to satisfy your own morbid curiosity. 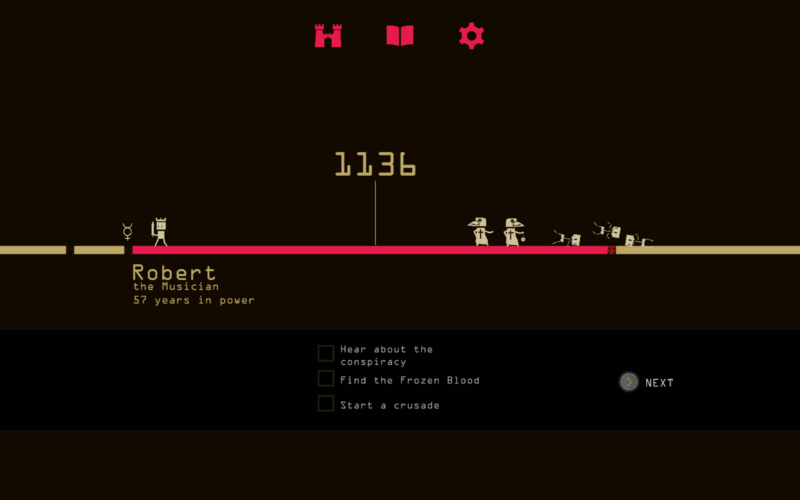 Those names and deaths don’t come randomly. You earn every single one of them. Sometimes they come as a surprise, and sometimes you leap headlong into them. In Reigns, you must make quick decisions that may or may not have clear consequences. Let’s take the example of the following situation.

For example, someone comes to you asking about building a library to house a generous gift of books. 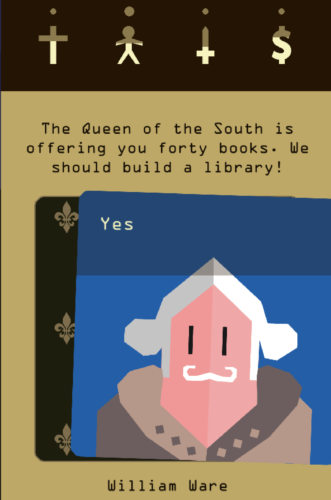 Along the top of the screen are your four resources- the church, the people, the military, and the treasury. Each decision will have some impact on one, some, or all of your resources, and the severity of that impact is indicated by either a small or large dot.

Once one of the resources runs out because of something you’ve done or, more likely, by no fault of your own, you die.This delicate balance of resources is one of the core mechanics of Reigns. Each decision is a gamble. You know that something will be affected, but you don’t know how.  Like, when you try to launch a war but your army is too weak (or some inscrutable series of decisions you made make it impossible). 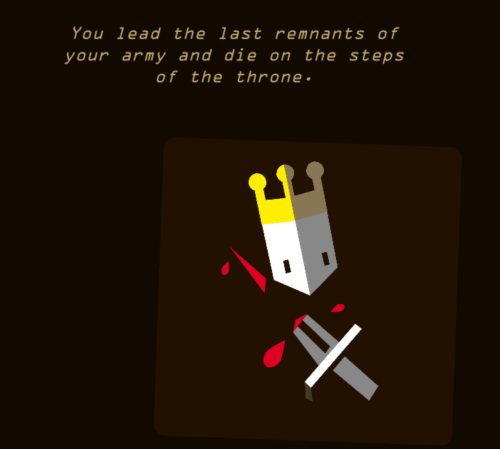 How does a decision about building a library have anything to do with dying at the base of your throne? Hell, it has as much to do with it as any decision you make has to do with how you fare in any other situation. Drastically different results coming about by minute changes in starting conditions, that’s how. That’s chaos theory in action, and you don’t need to see velociraptors jumping at a chain link fence to know it’s there.

Of course, if you live righteously, your death will be slightly more glorious than some of your more unscrupulous ancestors. In fact, one of the greatest achievements is living until old age – which is about the age of 40 in Reigns years. Like real life, living too long is sort of its own punishment. 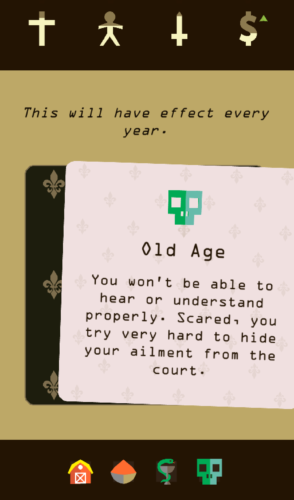 Of course, nobody lives forever in Reigns. Eventually, time catches up to even the most beloved ruler. 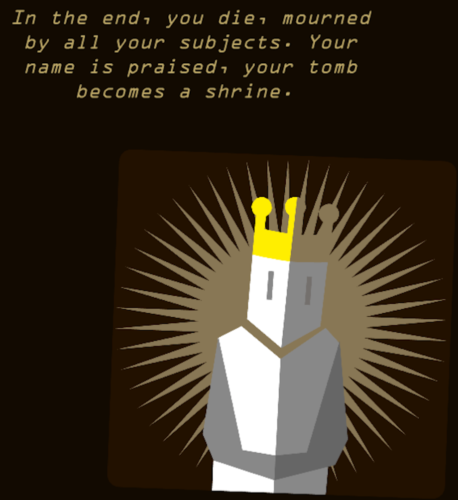 Despite the fact that this game challenges me to absolutely despise it at every turn, Reigns is decidedly charming, and contrary to the clamor of reviews talking about “adult decisions” and whatnot, it offers up plenty of dark humor and nonsense.

Despite its charms, there are a few downsides. The art is predictably simplistic, but the visual shortfalls are alleviated by clutter-free and fluid interface.

There is also a lack of guidance in this game. Yes! Finally something to hate. Surely I can cling onto the lack of documentation that plagues so many other games. Of course, given the process of discovery as a part of the game that is not punished like in so many roguelikes, the player never really feels the need to be coddled.

Not to insinuate that this is a roguelike. Quite the contrary. Reigns may be the first true anti-roguelike. A game that requires death and failure as a method of progress.

In a gaming landscape riddled with one-and-done roguelikes, fast platformers, and horrendous minimalist exploration games, Reigns offers up something different. A game where the discovery process is encouraged and death is not the end, but part of the process of moving forward.

I learned a little about myself while playing Reigns. I learned that sometimes a consensus does not necessarily mean that a game has been formulated to be satisfy the masses. That sometimes a game can take risks and tread its own path and still be a winner.

Most of all, I learned that my short term memory is completely shot and that if someone asks me the same question two minutes apart, I will answer in the exact same way.

And then I will die.

…Or maybe I’ll just get fired. 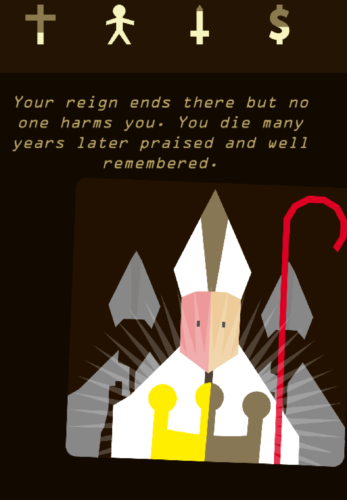 Yes. That’s right. Highly recommended. Reigns is at once absurd, hilarious, mystifying, chaotic, and perfectly orderly. Sort of like life. Give this one a try.