When I first saw The Rivers of Alice, I was not expecting the experience I’ve lived over the last week.

See, I was expecting a beautiful, hand-painted and moody adventure with a melancholy accompaniment. You expected that, too, right?

So, I start up the game. It begins in a minimalist fashion, with scant, if any, help from any menus. That’s fine. I love discovering crap, right? Everybody does!

The game opens in a bedroom. The titular character (I assume- there is no text in the game that makes any sense) is sleeping restlessly, haunted by an unknown spectre, perhaps night terrors. Who cares? It’s a great moment for a screenshot!

I whip out my three favorite fingers and hit the command+shift+3 combo.

The game has moved on at this point. Alice has awoken, and the shaft of light that shed a smattering of welcome color into the scene has abated. Alice is up, and the game is afoot.

The main mechanic of manipulation is more fitting of an iOS title rather than a computer game, which makes sense because it is a direct port from an app. The transition has been rough on Alice, indeed, as the game suffers from some interface and usability issues.

For one, the menu is barely even there. There is no control scheme, because it is a single click type of game…another remnant of its mobile past. That is not a problem, so to speak, but perhaps a windowed mode or some sound options would be nice. I typically turn off game music the instant I start a game. Immediately, I turn the music off. Game time is also podcast/TV/movie/listening-to the-drumbeat-of-the-rain time for what I’m assuming is a large percentage of gamers. That in and of itself makes Rivers of Alice a bold undertaking.

I hit Command+shift+3. Nothing. See, I had forgotten about how screenshots had been disabled by some malevolent force. I try to do a slice instead. Tic-tic-tic on the command+shift+4.

Nothing. So now let’s try Steam overlay. Tic-tic, shift+tab. Nothing. Wtf? Steam Overlay is always there to bug me when I don’t want it in a regular game. Why not now? So now let’s try the Steam screenshot shortcut.

Tic-tic on the Fn+F11 combo. Nothing. It lowers the volume one notch.

At this moment I tried the old standby, which was to wipe my entire hand over my whole keyboard, Johnny B Goode style. Nothing but heartbreak and Wing Dings.

I stood up and walked away from the computer, wholly unsatisfied. Was this what my experience with The Rivers of Alice was going to be?

I remember thinking to myself “this blows”. Even in times of total frustration I can still wax philosophical.

Fraps? Yeah, is Fraps installed? No, Fraps is not installed, that’s a Windows program. I’m on a Mac. Steam is on Mac. The game was released for Steam, FOR MAC. I am not alone. I am not the only person who owns a Mac. After maybe 45 minutes of troubleshooting, I decided to give the game the ol’ college try once more.

I manage to maneuver Alice through a scene with a river and a big sleeping slug or something. 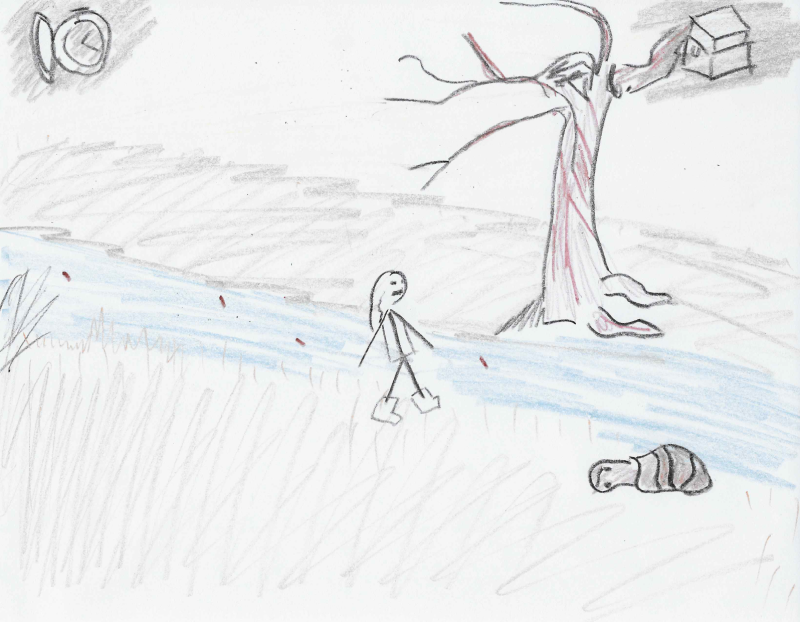 A tree dangled a necklace over my head, and leaves meandered across the screen on a lugubrious watercolor stream. The game is stunningly beautiful, I thought. Let’s get a quick snap of this.

Completely disarmed, I absentmindedly tic-tic-tic on the command+shift+3.

Is the game so beautiful that it makes me completely forget about my inadequacies? No. Nothing can make me forget those.

Is the game’s soundscape so wistful that it lures me out of my own headspace? No.

Another Internet search. Maybe now I can figure it out. If there is one thing I have learned about computers, it’s that doing the same thing over and over again will eventually lead you to the correct answer. Just like how when you lose your keys you look through the same pair of pants 15 times, incredulous that it might not actually be in the hidden key pocket. I dove straight back into that hidden key pocket, spelled G-O-O-G-L-E.

An extension? What is that? I open up the Steam preferences and attempt to open the game in windowed mode. The game opens, defiant of my commands, in full screen mode.

I play again, newly resolute. I grab the necklace and ask my friend Sloth (the weird little slug guy) about it, only there are no words, only cryptic photos involving dragonflies. I consult a big book that grows out of the ground on a stalk and it offers absolutely no help. After a time of flapping in the wind, the wind literally appears on the right side of the screen and a click moves me to the next hideous tableau.

The next screen centers on a harp-wielding harlot in a fiery chasm behind several tall flowers. She plays a series of notes, and a different section of bridge phases in and out with each tone. Clicking a flower plays one of the self-same notes the harlot has just demonstrated. It seems like an easy puzzle, but no good game would be so simplistic. The answer is clearly elsewhere. 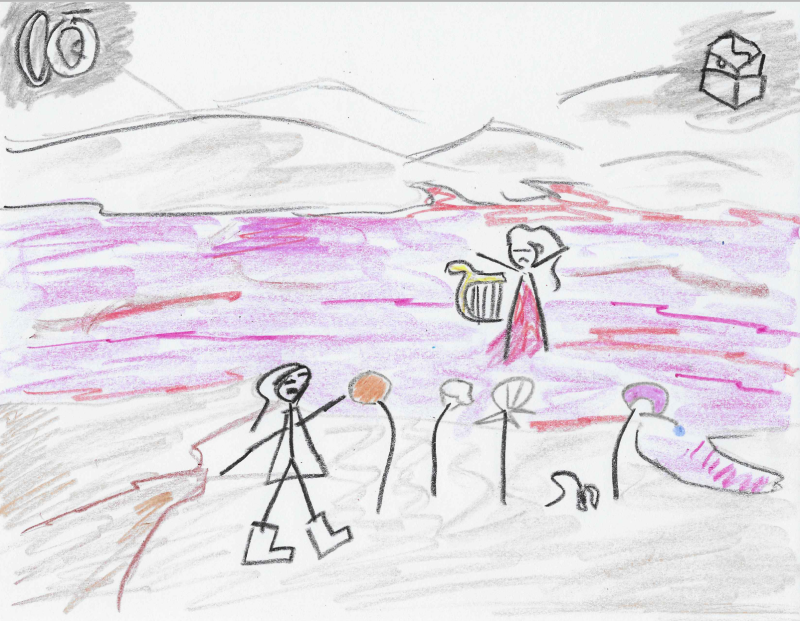 I continue my sojourn to the next screen in search of the answer. Another screen, another tic-tic-tic on command+shift+3.

So how is it possible that I am the only Mac user who has a problem taking screenshots of a game in Steam?

At this point, my head cocked back, mouth open in a wicked half smile, and a wild cackle escaped my lips…the sound that could only be evoked by a true moment of clarity.

See, I wasn’t freaking out about not being able to take a screenshot. I was frustrated because the game was so boring.

The problem with The Rivers of Alice is that is looks, and, even worse, feels like a mobile game. It is a terribly slow moving game, as if the Kings Quest series had been preempted by a dumpy 13 year old girl and all the exciting stuff was strained off and discarded, and then the whole thing was rewritten by a focus group held in the local methadone clinic. That process is guaranteed to get you The Rivers of Alice every single time.

So even though it is a remarkably un-engaging game, the concept is fresh, where each individual puzzle is not a self-contained entity. The game must be explored in order for any progress to be made, leading to a less linear experience than most point-and-click adventures.

There are casual games, and then there are games that you can play while you sleep. This is a game that is slightly more exciting than easing into a wingback chair with a dog-eared copy of Pride and Prejudice. It isn’t that a game cannot be relaxing, but The Rivers of Alice just doesn’t have anything that grabs you and makes you want to play, the way that Awe pushes new worlds and layers of complexity, or how Otto and George’s absurd difficulty demands you to play more.

Even more disappointing is that The Rivers of Alice has bought into the milieu of giving you exactly zero information about the characters, who they are, what they are doing, or why they are doing it. So, that forces you to ask, why should I play? Non-traditional games are fine, and I understand that maybe The Rivers of Alice is just a graphic mechanism for delivering puzzles, rather than a story-telling platform. Playing crosswords or Sudoku are better examples of playing a puzzle for the sake of playing a puzzle (challenge and cognitive training aside), and they don’t have nearly the appealing visual qualities that The Rivers of Alice has.

So please tell me why not even the command lines work. I tried “–sw” and“–windowed”, and the game starts full screen both ways. Not that it was a sure thing, but it was at least an idea! It’s a mobile game ported (poorly, I may add) to Steam, and everything was thrown out the window because of it. All decency and common sense and screenshot ability was left behind. For what? For what, a girl drawn in black and white walking around with a Moleskine full of dragonfly drawings?

So I said screw it. If I can’t take a screenshot, I’ll just draw them. The Rivers of Alice style. 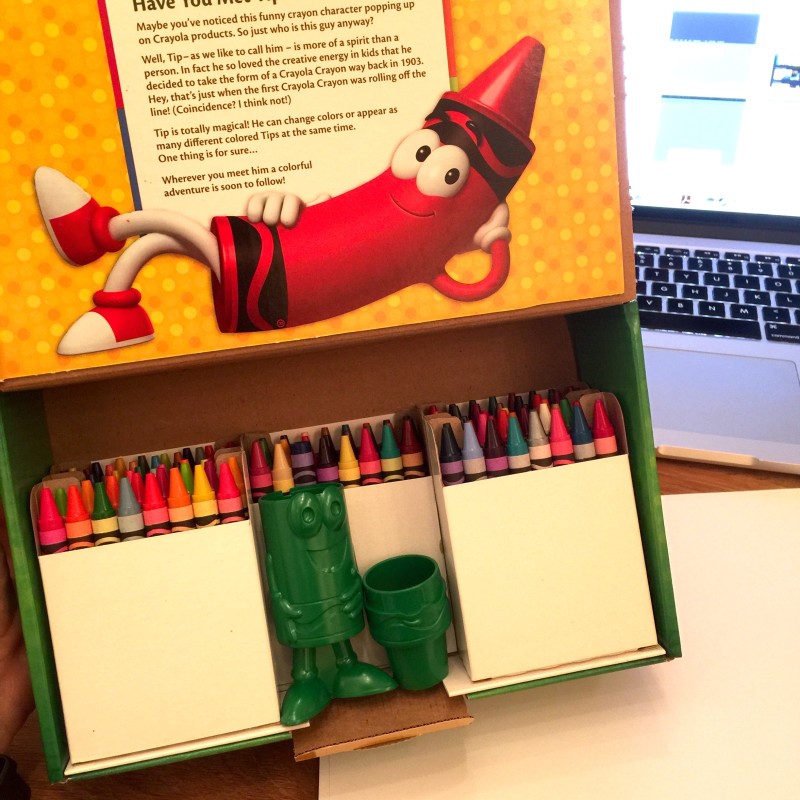 See that? It’s a 120 pack. Look how lame this packaging is! Remember how the big box used to be the wax equivalent of Scuola di Atene, with the rainbow of colors walking down the steps of Crayola and onto the paper? It’s been replaced with white sleeves inside of a cardboard casket. And the colors aren’t even arranged logically. It should be a rainbow!

…because they don’t make Quaaludes anymore.