Lawrence Kasdan will be receiving Cinequest’s Maverick Spirit Award on Saturday, February 28 at 1:30 p.m. at the California Theater in San Jose. Tickets for the event and other great activities at Cinequest are available here.

A sultry femme fatale with murder on her mind. Heroic rebels struggling against an overwhelming Empire. An archaeology professor moonlighting as a great adventurer. And often, ordinary people who turn out to be quite extraordinary.

If Lawrence Kasdan didn’t invent them, he perfected them. In the 80s his work dominated the cinemas, and though he wrote big budget blockbusters, he is adept at every genre. If The Empire Strikes Back and Raiders of the Lost Ark thrilled a generation, The Big Chill defined one. When Hollywood declared the Western dead, Kasdan brought it back to life by writing and directing Silverado.

As a writer-director, he would later strip the Western of its mythos with Wyatt Earp, after Oscar nominations for his adaptation of Ann Tyler’s The Accidental Tourist. Kasdan returned to humanistic whimsy with Mumford, then sci fi horror with Dreamcatcher.

Kasdan shows us comedy in tragedy, and vice versa. With him, there can be wonder in the mundane, and earthiness in the fantastic. A true maverick, his career and his interests will not be categorized. But his films do all have one thing in common.

In all of his movies, no matter the genre, his characters live and breathe as real people. We know them. We wish we were as clever as some of them – okay, maybe not Kathleen Turner in Body Heat. We often aspire to be as strong – whether they are facing Darth Vader or the grand canyon of life.

Is it any wonder that movie fans cheered when Disney announced they were bringing Kasdan back to write not one but two new Star Wars films?This is the right man to awaken the Force. The generation that grew up on his movies will feel that thrill again, and a new generation will get drawn into new chapters of the defining epic of our time.

That’s Lawrence Kasdan. He knows and has written about all the seasons of our lives – and he still has more to show us. 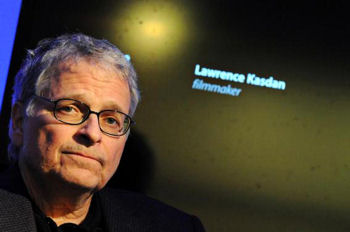