At least, that’s what elderly scientist Mac (Greg Lucey) thought all his life. Time goes one way, and Mac has gotten a diagnosis telling him he’s almost to the end of his journey in it. Except Mac and his late wife Lucy (Christine Kellogg-Darrin) once hosted a children’s show about science, and she had a different opinion.

Mac’s doctor tells him he must begin purging everything that might remind him of Lucy. Mementos will only confuse him as his dementia progresses. But instead, as Mac waxes nostalgic watching old tapes of their shows, he gets inspired. Disaffected teen Tess (Laurel Porter) sees him decorating his house for Christmas (in July), and becomes his unlikely confidante as Mac tries to hold on to his memories… and maybe make Lucy’s last science project work.

Directed and co-written by Colin West, “Here and Beyond” plays a little into our own nostalgia — VHS tapes, the specific style of 80s kids’ television, and Christmas kitsch. But that’s all just dressing for a well-drawn emotional drama, as Mac struggles to retain a connection while making a new one. 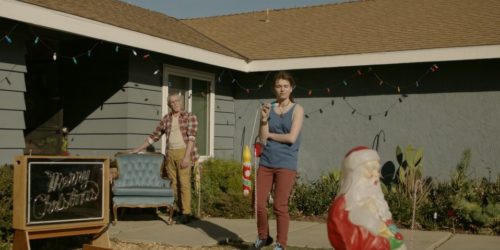 West toggles back and forth between the old shows — which look cheap, cheesy, and fun — and Mac working his way through the now. Subtle production design clues us into the progression of his disease, and the realities blur, even for Tess.

It’s an inspirational, beautiful short that once again shows that effective science fiction can be simple, as long as there’s a real human story underneath it. At 17 minutes, the story still draws us in emotionally. While West can’t show us every step in the burgeoning friendship between Mac and Tess, there’s enough sketched in to make it believable, and then fully brought to life by Lucey and Porter. Both characters struggle to make a new connection, even though it has a (literal) ticking clock.

And it’s a script with lines that will stick with you. In the best science fiction, there are more things on heaven and earth than are dreamed of in your philosophy, and then… West and his co-writer Corey Aumiller sneak up on us with philosophy.

“Here and Beyond” screens at Cinequest on Thursday, March 14 and Sunday, March 17 at the Century 20 in Redwood City, and Saturday, March 16 at 3 Below in San Jose as part of the Student Shorts Competition Program – Family. You can find more information and purchase tickets here.