Do you have time to confront the past when it looks like there’s no future? Writer/actor Jenna Lyng Adams finds an intriguing way into the question by combining an apocalyptic thriller with heartland drama. As the real world girds itself for a health crisis, Before the Fire couldn’t be more timely, giving audiences a chance to ponder who they want to be versus who they will be if things get worse.

Deep into the onset of a global pandemic, TV star Ava Boone (Adams) and her boyfriend Kelly (Jackson Davis) need to get out of Los Angeles. There are hints of nationwide panic, but the focus stays on Ava as Kelly makes sure she gets on a plane back to their hometown in North Dakota. Society hasn’t collapsed yet; consider this more a slow (and more plausible) scenario. Uninfected people still have some time to prepare, but news broadcasts indicate hoarding has begun — or was that just CNN yesterday? — and gas prices are going up.

But Ava feels betrayed. In some ways, she’s safer going home, but she left an ominously unresolved past behind her in the mid-west. Before she became well-known for playing a werewolf on a CW-like supernatural drama, she had long been running away from home. 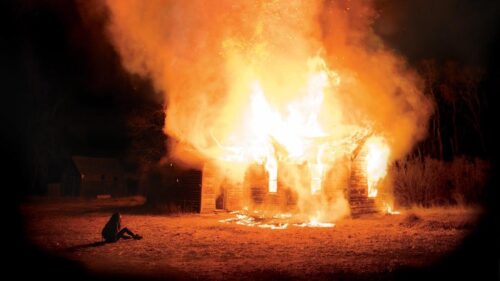 Director Charlie Buhler allows the film to breathe. For long stretches, the looming fear of infection takes a backseat to the consequences of the fear itself. With breakdown on the horizon, how much effort does it take to stay decent, and how easy is it to cross the line without knowing you’ve done so?

One of the nice touches to the script is that Ava is no hometown hero. She’s known, but for the most part, she doesn’t play up her status, and it’s only mentioned a couple of times by other characters. If anything, when facing how hard people are working just to get through the day, she feels inadequate. No stunt person is there to step in and take care of the hard tasks.

It’s a good slice of life, and a good microscope on the part Hollywood usually doesn’t show us in this genre. Before the Fire isn’t about surviving an apocalypse; it’s about how to survive yourself.

Before the Fire will premiere at Cinequest at 3 Below Theaters and Lounge March 7th, with three additional screenings on the 9th, 11th, and 12th. Tickets are available here.