Kids can be cruel, often because they’re just thoughtless. And in the internet age, as a now disgraced comedian once observed, empathy can be harder to learn because they often don’t see the consequences of their meanness. So when the boy called “Butter” (Alex Kersting) decides he’s had enough of his classmates’ bullying, it’s understandable, even if we don’t agree with his solution. He announces via social media that on New Year’s Eve, he will eat himself to death live on webcam.

Based on a popular YA novel by Erin Jade Lange, Butter tackles bullying and the dangers of the internet head on. In writer/director Paul A. Kaufman’s adaptation, we hear how deeply ingrained the nickname has become; it’s not until the end that we find out his real name. Almost everybody calls him Butter, even his friends. The exception is his mother Marian (Mira Sorvino); she still calls him Baby. His father (Brian Van Holt) barely acknowledges him.

Butter has two escapes — an online alter ego who builds a relationship with his real-life crush Anna (McKaley Miller) and a real relationship with his saxophone. Butter plays jazz as smooth as, well, butter. And don’t think the school music teacher Professor Dunn (Mykelti Williamson) doesn’t know it. Though Butter won’t play in the school band, he occasionally sits in with Dunn’s professional combo, but never for public performance. So no classmate knows his soul but Anna, and she doesn’t know its his.

It’s a timely story, and a compelling idea. Though it’s obviously present day, it has some rhythms of an 80s teen sex comedy (without the sex). Once Butter makes his pronouncement, the popular rich kids come around to actually talk with him, because they can’t believe he’s going to go through with public suicide. I also really don’t know what age you can buy alcohol in Scottsdale, but I’m chalking up how much drinking there is to… stereotypical movie rich kids.

Because a lot of characters interact with Butter, many get short shrift, just quick sketches with a few subplots that never quite get their due. There seems to be a strong former friendship with some of the band kids, but they just pop in and out to punctuate Butter’s state of popularity. As cool as Professor Dunn is, he still really serves as moral conscience to spell things out. 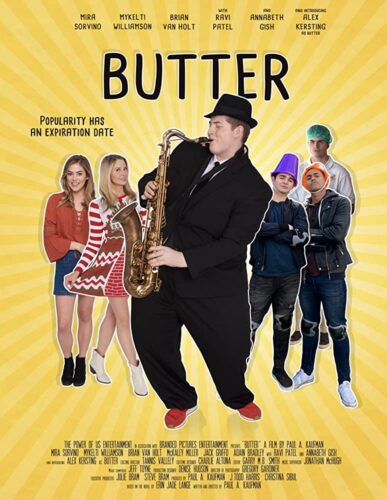 Serving a similar role but making it absolutely pop, Ravi Patel lifts his Doctor Bean into moments of both humor and genuine warmth. His lectures don’t feel forced. He’s not alone in fully fleshing out his character. Both Sorvino and Miller give energy to being the women in Butter’s life; Miller having the slightly tougher role of having two relationships with Butter even if she doesn’t know it. Kaufman also includes scenes with Miller that indicate teen bullying may find a specific target, but is also often a scatter gun in every direction.

And in the central role, Kersting is charming. Talented, snarky as any teen, but also revealing the constant pain underneath.

Butter makes its point, and if it doesn’t continue on the festival circuit (if we have a festival circuit this year), it should find its way into classrooms, virtual or real. It has the potential to spark real discussion among the kids who need it most.

Butter made its World Premiere at Cinequest, and will hopefully be returning to Cinequest in August. Updated details can be found here.

Fanboy Planet is affiliated with Amazon, and any Amazon purchases made from this site may generate affiliate revenue for us.