If you’ve walked in downtown San Jose by day, you might not have thought of it as a David Lynchian landscape. Maybe not even walking at night. Writer/director Peter Hsieh turns it into one, a taxi driver’s dream that alternates between neon-noir dark doings and brighter moments that may be a little too flourescent, but that seems Lynchian, too.

Though Drive All Night might not actually be Dave’s (Yutaka Takeuchi) dream. The film opens on the mysterious Cara (Lexy Hammonds) about to play a video game. Each set piece could just be a level in some tech company’s game — perhaps controlled by the gravel-voiced big boss who may or may not be the malevolent god of Silicon Valley. Or maybe it’s the dream of Lenny (Johnny Gilligan), a sleek bald hit-man also clearly trapped in the game who can never seem to cross paths with his target. Regardless, Dave drives past them all, sometimes with Cara in the back seat of his cab.

As cab drivers must be, Dave is a listener. He hears the stories of a slightly sleazy fellow driver (Will Springhorn — who wears his blue blockers at night), and nods impassively. According to Cara, who smirks with too piercing eyes, his strongest connection must be with diner waitress Morgan (Sarah Dumont), a clear anchor of decency, but it’s up to us to decide if that’s really true. Certainly, cabaret singer Midnight Judy (Natalia Berger) can easily lure him into her web, but if there’s one thing Dave seems really good at (besides driving), it’s shaking off the cobwebs of a bad dream.

Hsieh doesn’t provide too many answers, which means that Drive All Night, like Dave’s schedule, is full of side quests that are glimpses into other fully fleshed stories. There may or may not be a full horror film in the Legend of Midnight Judy, but we have to be satisfied here with Cara relating an urban myth about her. Cara even steps off-screen to other set pieces that only appear in a Drive All Night mobile game.

While it won’t be to everyone’s taste, Drive All Night is a strong debut feature from Hsieh (interview here) that is meant to capture a vibe. If you’re driving all night, you’re just absorbing sights and sounds and maybe lost in your head. It’s much safer to do that surrounded by movie fans in a theater at midnight. Someday, hopefully, you’ll be able to do that again, and Drive All Night should thrive in that environment. 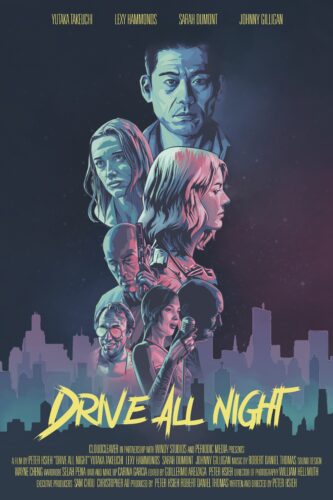 Drive All Night currently streams until March 30 at Cinequest through creatics.org/cinejoy/. Tickets are $3.99, with half the proceeds going to the filmmakers.