Editor’s note: This year marked the 50th anniversary of the convention now known as Comic-Con International, aka “the San Diego Show.” It also marked the 20th year I’ve been covering Comic-Con — 19 as Fanboy Planet, and 1 as a stringer for Daily Radar. As I was going through the archives to put together a “look how it’s changed” piece, I came across this article from 2001 and smiled. CrossGen Comics was bold, brave, and maybe a little crazy. A few months ago, its founder Mark Alessi passed away, and so I wanted to rerun this article — acknowledge that his dream was one of the things that made Comic-Con so special to me, and that if you don’t know about CrossGen (Disney owns most of the assets now), you should find these in your local comics shops — they are terrific reading, especially Mark Waid and Jackson Guice’s Ruse. Here’s the original article:

Even if you weren’t near the CrossGen Comics booth at San Diego, you could easily spot the staff. Not because of that certain gleam in their eyes, though Mark Waid does have it. Nope. They were the guys wearing the football jerseys.

“That’s because we’re a big team…a good team,” said CrossGen Director of Corporate Communications Ian Feller later. “We are a united company, not just because we’re forced to wear these things, but because we’re all part owners of this company.”

In two short years CrossGeneration Comics has catapulted out of nowhere to become a huge hit with readers. And they’re showing no signs of stopping. At San Diego, their booth rivaled the big two, DC and Marvel, in size. And thanks to their recruitment of some of the best talents in the business, Feller is right: they are a good team. Perhaps no one better illustrated the team spirit than fan favorite George Perez. The popular artist sketched and signed for 30 hours out of the 38 that the exhibit hall remained open to the public. After all was said and done, Perez had done 203 sketches of anything and everything that a fan would ask. 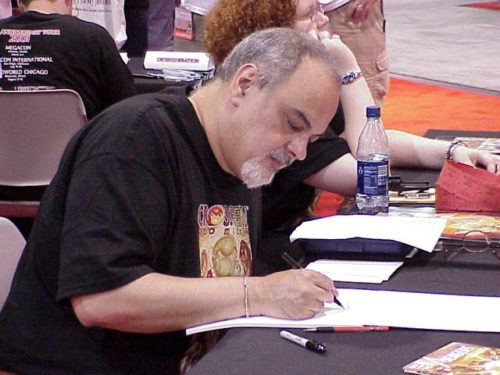 “He is a machine,” commented Feller, who reminded us that Perez will be finishing up a run on CrossGen Chronicles before diving whole-hog into the long-awaited JLA/Avengers. If you couldn’t find Perez at San Diego, the CrossGen booth still had at least six creators signing at all times, a feat they will repeat August 17-19 at WizardWorld in Chicago. Yes, Perez will be there, too. The team spirit doesn’t end with CrossGen creators and staff, though.

Feller put out a call to fans for help at the convention, and definitely got an answer. A similar situation had worked out for CrossGen at MegaCon in Orlando, so they thought it worth repeating the experiment. Seven fans came to San Diego specifically to work the CrossGen booth, helping with line control and serving as runners for the staff. Others wandered in at the show and asked if there was a need, so Feller signed them up, too.

“We couldn’t have done it without them,” he said, “it’s nice to have that kind of support.”

Fans have good reason to support CrossGen. While the company did not make any earth-shattering announcements at the convention (nor “…get into any controversy like some of the other publishers did,” Feller added), the booth maintained a steady flow of traffic. Instead of flash, the company offered more of its solidly entertaining books, gaining a lot of interest in upcoming projects.

Among those is Ruse, a Victorian thriller from Mark Waid and Butch Guice. Though set in the same universe as the other CrossGen books, Ruse will be the first book that doesn’t have a Sigil-bearer (the unifying mark of power that runs through all CrossGen books). Instead, it’s intended just to be a solid mystery book in the Sherlock Holmes vein.

Following the release of Ruse, CrossGen will offer up Negation in November, and The Path next February. Fans attending WizardWorld will be able to get a look at them all. As a result of our San Diego experience, CrossGen may just have got us on the hook, too.