A few months ago, DC Entertainment launched a foundation callled “We Can Be Heroes,” designed to help provide famine relief in the Horn of Africa. They released a bold image of sillhouetted Justice League members, followed by a moving video to remind us all of who we can and should be when others need help.

DC Co-Publisher (and superstar artist) Jim Lee also called rock star Chris Daughtry, and asked if he would record a song to help. If you’re surprised that Lee has Daughtry on speed dial, don’t be. Daughtry is a long-time comics fan and no stranger to Comic-Con, as he kicked off a tour here three years ago. With his eponymous band, Daughtry recorded an acoustic version of his song “Rescue Me” which went up on iTunes last Tuesday. 100% of the proceeds go to the campaign.

And Daughtry has joined another artistic effort to bring awareness to the campaign by contributing to the traveling art exhibit “Darkness & Light”, which is currently in San Diego to coincide with Comic-Con. Fulfilling the fanboy dream (as if being a rock star ISN’T enough), Daughtry pencilled a sketch of Batman which Lee then inked. 50 lithographs of the image were given away last night at a signing with Daughtry, with more available for sale online.

Daughtry took a few minutes to talk to us before the crowd entered the Michael J. Wolf Fine Arts Gallery at 363 5th Avenue in the Gaslamp District.

“I’ve always been a big comics fan, a big fan of the Justice League,” Daughtry said when asked why he would get involved in this project. “Jim called and said ‘there’s no big catastrophe, no big tsunami or anything like that, you’re not going to hear about it on the news. But it’s the worst famine in 60 years, the worst drought in 60 years. They need water, food, things like that. Do you want to help us?’ ‘Absolutely.'”

As to why he would be asked to contribute a drawing, Daughtry admitted that he and Lee had talked about collaborating on artwork for some time. The rocker had started out in high school wanting to be an artist, and occasionally over the past few years he would send Lee sketches and Lee would offer criticisms and corrections.

“Batman is my favorite superhero,” Daughtry explained. “I’ve always identified with Batman because I don’t have any superpowers,” he laughed. “Maybe that was one of the things that always intrigued me about him. Anybody could — technically — be him. I don’t necessarily want to get my face beat in every night, so I don’t relate to him THAT closely. If I had to choose (to be) a superhero, that was always a little more attainable.”

How did he get into comics? “I was sucked into Super Powers or Superfriends when I was five years old. Then Batman with Keaton and Nicholson solidified that. Then I got into comics, and Jim Lee was a huge influence back in my high school days with his run on X-Men and Wildcats.”

Daughtry smiled. “He’s also the reason I never got into comics (professionally). I always compared myself to him, and I was like ‘if I can’t be that good, I’m just going to throw in the towel and just be a musician.'”

“I kind of put all that on the back burner, so this is like the first thing I’ve done in so long. I felt very rusty.” A reporter commented that the image did not look rusty. Daughtry shook his head with a grin. “Well, you don’t know how long it took. I probably sat at the kitchen counter for about six hours. Considering Jim can do that in six minutes…”

So why choose this particular song to re-record? “I wrote it with my guitar player Josh Steely, and he sent me chord progressions and a lyric.We just always felt that the song, there are so many people who in some point in their life have felt like they needed rescuing, from whatever. Whether it’s financial or their job or whatever, everyone’s been in a situation where they felt hopeless.”

“At the time there was a lot of stuff going on in the world, in Egypt and other places. We felt like man, this song could be used for any of these situations, for the greater good. We always envisioned it being used for something and we had no clue about this (famine). When it happened, we were like, ‘here’s our chance’, here’s where it needs to go.”

“And he (Steely) was so pumped when I told him about it. ‘Finally!’ When he originally had the idea for the song, he saw it being used for helping people. We were happy to see that come to pass.”

“We wrote the song almost a year ago, so it’s a little vague in what it’s about, but I think the sentiment of that feeling…it’s not a literal I’m out in the ocean drowning but that metaphor of feeling completely hopeless and you need to be pulled out of that situation.”

So how can you help?

Certainly buy the song, but in addition DC has teamed up with Junk Food Clothing to offer t-shirts of some of the art in the Darkness & Light exhibition. If you stop by the gallery over the next two days, you can scan a QR code by the art you like, and it will take you to the Junk Food site to purchase the t-shirt. $15 from each shirt sale will go to famine relief. (DC also has t-shirts and other paraphernalia on sale in the gallery, with 50% of the proceeds going to the foundation.) 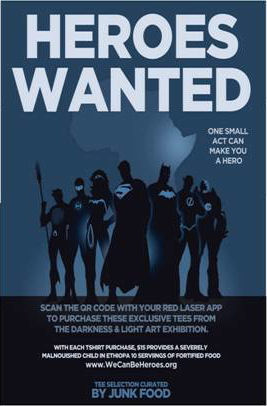