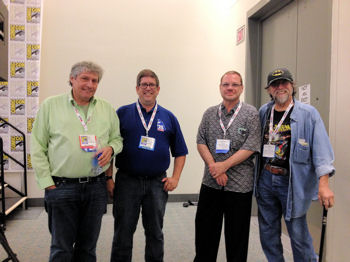 Once again, Fanboy Planet will have a place at the table at the Comic-Con International annual Pro/Fan Trivia Contest, held on Sunday, July 27 at 4 p.m. in Room 4.

Last year, I devised the questions and hosted the event at the behest of the inestimable Tom Galloway. The fans took on some giants of our youths — from left to right Elliot S! Maggin, who wrote some of the greatest Superman stories of the 1970s, Martin Pasko, who wrote just about everything at some point or another, and Len Wein, creator of Swamp Thing and a little guy named Wolverine.

This year, Len returns to lead the pros, but at this point, I don’t know who they will be. All I can tell you is that the questions will cover characters celebrating significant anniversaries this year.

As many of you no doubt are aware, Batman is front and center with his 75th Anniversary (Wednesday, July 23 being “Batman Day”). But it’s also the 75th Anniversary of Namor, the Sub-Mariner.

Turning 50 this year (and looking none the worse for wear) are the Teen Titans, Daredevil and Metamorpho. Following by a decade are Iron Fist and Wolverine, and we shall see if Mr. Wein can answer a question about one of his most famous creations.

Fanboy Planet readers and podcast listeners, if you attend, please say hello. Perhaps we’ll all agree on a restaurant to have an unofficial meet-up and party afterward. It’s a fun and pleasant way to end the excitement of Comic-Con.