For the past 19 years, in the last hour of Comic-Con, they have met on a panel and clashed over the really important matters — questions like “what are the powers in the Mandarin’s ten rings?” and “in the Justice League story ‘The Creature in the Velvet Cage’, what are the five colors in the Sandman’s costume?” 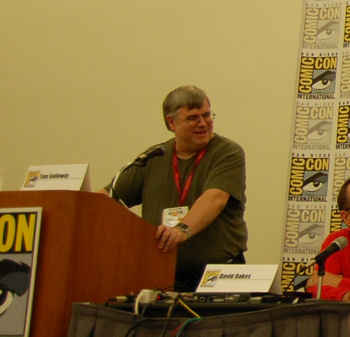 Yes, it’s the annual Pro/FanTrivia Match, and it’s going to celebrate its 20th anniversary this year at 4 p.m. on Sunday in Room 4.

Driven by Super Silver Age Fan (among many other things) Tom Galloway, the contest was first suggested by comics creator Len Wein, who is a huge game show fan. Galloway loves it.

“The best aspect of the match is that both teams take it seriously enough to really want to win, but also have fun with silly answers and trash talk,” Galloway said. “We’ve got fans of the match who don’t care about trivia, but like the interaction.”

In addition to Len Wein and Anthony Tollin on the pro side this year, Mark Waid will be returning after a few years off.

“The panel’s always a blast,” he commented. “It’s one of the few hours each year where I can not know my senator’s name, not remember any basic facts about the U.S. Constitution or real-world history, and still feel like one of the smartest men in the room.”

Note he said one, because he and Galloway are pretty evenly matched on trivia knowledge. Galloway is the only person to have beaten Waid in the match, so for the 20th anniversary, the stakes could be high.

Where they don’t conflict, though, is on the best running gag of the panel.

“My favorite bit that’s developed is that Len Wein is truly horrible at answering questions about his own work,”Galloway said. “It’s become a requirement that there be at least one question every year about something Len wrote, just so he can usually miss it, get beaten to the buzzer on it, not answer it, etc. and then go ‘Wait a minute! I wrote that!'”

Waid agreed. “Any moment with Len Wein struggling to answer a question about his own work is a highlight. Like most of us, Len’s memory for his own stuff isn’t as sharp as it is for the stories we all read when we were young and impressionable, but it’s become a running joke to see if Len can evade an ambush on his various runs over the years.”

The two should probably watch out, because Wein shared at WonderCon that he has been taking improv classes, so he could take the trash talk to a whole new level. 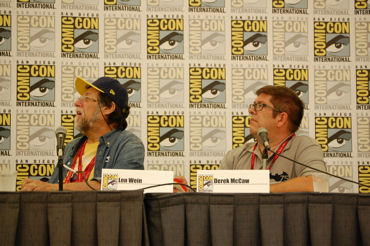 And Galloway does demur, “Last year, for only the second time, Len did correctly answer a question about his work. Both times we’ve given him a standing ovation.” (Last year’s question was indeed the one about the colors in the Sandman’s costume.)

“But probably my favorite single answer was last year,” Galloway said. “Michael Davis, on the pro team, had been doing a lot of comedy riffs based on his being black. On the final question, which would decide the match, the Pros were asked to name four of the ten powers the Mandarin’s rings possessed.”

“Michael, not seriously, yelled out ‘Black Power!’ ” Galloway didn’t miss a beat. “As moderator I responded, ‘ability to control darkness or the darkforce, yes, we’ll accept ‘black power’ for the first one,’ and the room lost it.”

But pros have been known to drop by, which is how Davis — Master of the Universe, co-founder of Milestone Media, and co-creator of Static Shock — ended up competing last year. 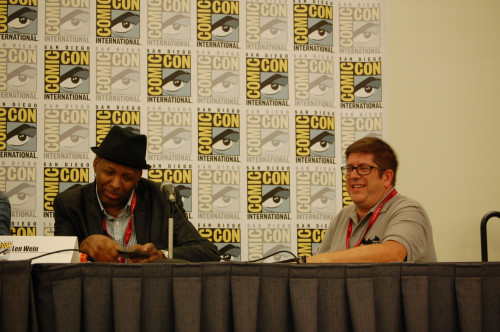 “Is THAT what that was?” he said. “I thought it was a ‘things to do at Comic Con’ panel. NO WONDER I got those looks from the audience when I asked, ‘where the white women at?'”

Fanboy Planet EIC and podcast host Derek McCaw will try to keep a lid on things as we run through questions focusing on characters celebrating an n5th or n0th anniversary, such as Robin, Shazam!, Catwoman, Joker JSA, JLA, All-New X-Men (Wein wrote the first couple of issues), Medusa, Hydra, and many more.

Tom Galloway will also be interviewing Paul Levitz about his three separate long runs writing the Legion of Super-Heroes for DC on Thursday, July 9 at 5 p.m. in Room 9.

Len Wein will also have a table in the Exhibition Hall, HH-08.

Michael Davis will once again host the legendary Black Panel on Friday, July 10 at 10 a.m. in Room 5AB.

Derek McCaw will be wandering around. Say hello.