I can’t say I expected this one.

The original movie, The Usual Suspects, is deservedly a classic. So why not take some of the ideas from that film and use it to launch a graphic novel.

Interestingly, it looks like a series of graphic novels will fill in the gaps in The Uusual Suspects — even if you didn’t 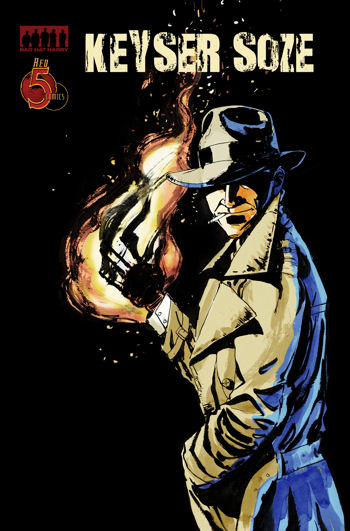 know they were there.

It was 1995 when “The Usual Suspects” debuted in theaters. The Oscar-winning film not only became synonymous with the modern twist ending, but it introduced Keyser Soze… one of the greatest movie villains of all time.

To celebrate the 20th anniversary of the film, Bad Hat Harry Productions and Red 5 Comics are pleased to announce a series of graphic novels based on “The Usual Suspects”. The first story arc, “Keyser Soze: Scorched Earth”, is set nine years before the events of the film as a younger Keyser Soze is establishing a narcotics empire during the tumultuous days of Ronald Reagan’s war on drugs.

Well known for bringing iconic comic book characters to the silver screen with movies like “Superman Returns” and the “X-Men” franchise, Bad Hat Harry Productions is coming full circle by bringing one of the most iconic film characters to comic book pages.