Any child of the Seventies remembers Sid and Marty Kroft and their imaginative control of Saturday morning live action television. H.R. Pufnstuf, The Bugaloos, Sigmund & the Sea Monsters… the scope of the worlds they created was amazing.

And they didn’t leave the world of superheroes alone. No, they gave us two spandex-clad heroines: Electra Woman and Dyna Girl, with their driving disco beat theme and electro-powered wonderful Electracom toys.

So when news of a new attempt to reboot EW&DG started getting some buzz, especially with the internet goddesses Grace Helbig and Hannah Hart attached to the main roles, well it was feeling a little too good to be true. 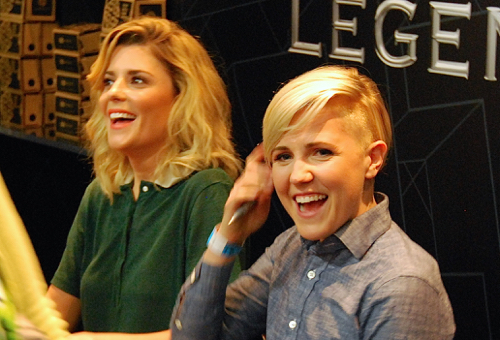 Yes, I marked my calendar for their signing at the Legendary booth, and was a little disappointed that they didn’t arrive in costume. But who can stay upset when faced with two so charming and happy people? Since then we’ve gotten more teaser footage along with action scenes we handn’t seen before Comic-Con!

Well, let’s let Legendary tell you all about it:

Legendary Digital and Fullscreen have partnered with YouTube phenomenons Grace Helbig and Hannah Hart in an updated version of Sid & Marty Krofft’s classic 70s TV seriesElectra Woman and Dyna Girl, bringing the property to a new generation of viewers.ELECTRA WOMAN & DYNA GIRL follows two superheroes Electra Woman (Grace Helbig) and Dyna Girl (Hannah Hart) as they move from Akron to Los Angeles in hopes of making it big in the crime fighting world, only to find competition with other vigilantes and infighting amongst themselves. Both Helbig and Hart have large social media followings with a combined total of over 10 million subscribers and followers over all of their YouTube and social media platforms. Legendary Digital produced this digital series which will premiere with Fullscreen.

Here are the originals, Electra Woman (played by Deidre Hall) and her teen sidekick Dyna Girl (Judy Strangis), in all their disco beat glory and on-the-nose theme song.