One of the sweetest most human moments in Captain America: Civil War was the exchange of New York bona fides between Captain America and Spider-Man. That quick Brooklyn call-out gets to the heart of why we love Chris Evans’ portrayal — and why Captain America has been reminding us we’ve always been great!

Marvel has commissioned a bronze statue of Captain America that it will officially unveil at Comic-Con tonight, but has released photos and a simulated picture of it in place in an outdoor environment. This weekend, it will be on the convention floor, but Cap needs to stand tall in a park, where children can play around him and pigeons will respectfully keep their distance.

Yes, it’s all a publicity stunt for the 75th anniversary of Captain America, and there’s plenty of other merchandising coming our way, too. But just for a minute, let’s just think of the higher reasons this iconic hero deserves a statue. Then we’ll buy the souvenirs, because that’s the American Way. 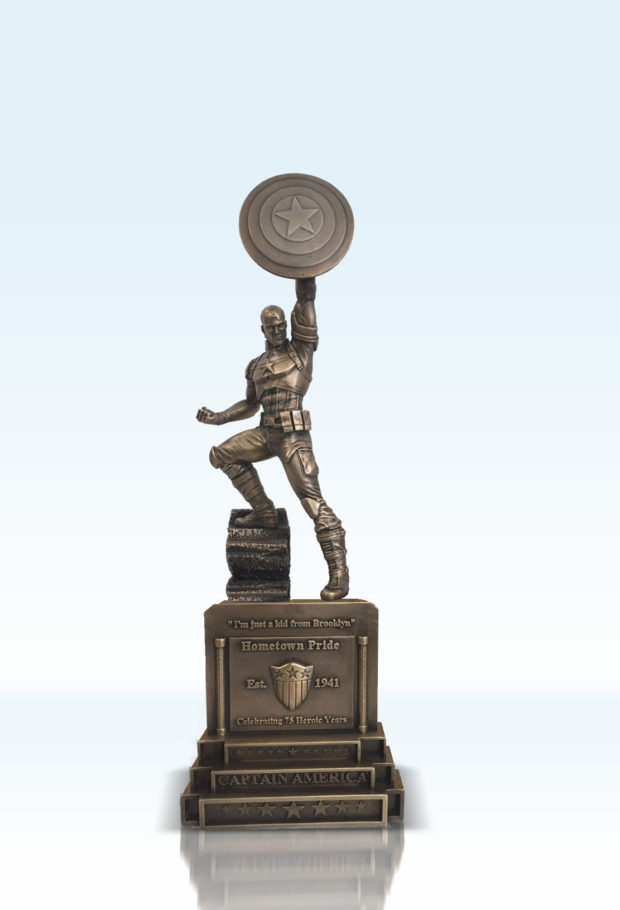 Since his creation in 1941 by Jack Kirby and Joe Simon, Captain America has gone through numerous evolutions, but  always remains as one of the world’s most influential and inspiring Super Heroes. Kicking off a new phase of the year-long celebration of 75 years of Captain America, Marvel Disney Consumer Products and Interactive Media have unveiled a slate of heroic activations taking place at San Diego Comic-Con and beyond to honor the First Avenger, along with a wide range of celebratory merchandise.

Headlining the Captain America 75th anniversary celebration, Marvel has collaborated with high-end collectibles maker Comicave Studios to create a one-of-a-kind Captain America statue that will be displayed at the Marvel booth #2329 at Comic-Con International on July 20. Comicave Studios worked closely with Marvel artists in New York and a Brooklyn-based sculptor to design the bronze tribute, standing at over 13 feet and weighing 1 ton. The statue will continue to stand tall on the show floor throughout San Diego Comic-Con for photo ops with fans, and 1/12-scale bronze replicas of the statue will be available for purchase. Plus, a custom comic book was created by Marvel Publishing writers and artists to integrate the statue into new storytelling.  This one-of-a-kind comic will be available in limited quantities at San Diego Comic-Con and future Captain America events. 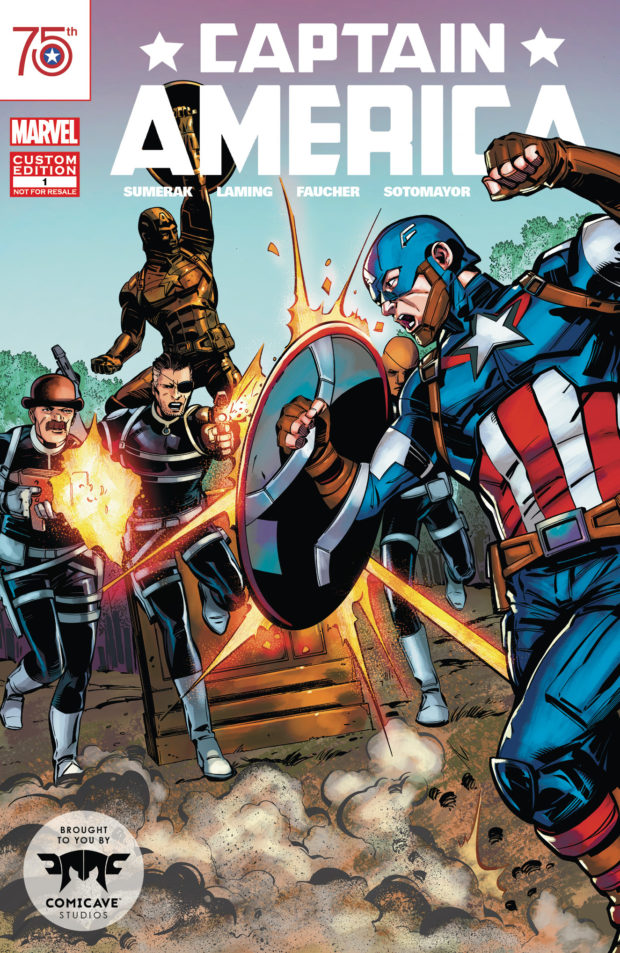 Following SDCC, the commemorative statue will journey via truck across the country to Brooklyn, NY – the hometown of Steve Rogers – for a limited engagement in Brooklyn’s Prospect Park. Fans can follow the truck along its cross-country route through photos on social media sites like Marvel and StyledByMarvel Instagram. The statue will be on display in the Children’s Corner of Prospect Park for a two-week temporary installation, kicking off with a dedication ceremony and community event on August 10th from 1-3pm. In the evening, a special viewing of the recent blockbuster film, Marvel’s Captain America: Civil War, will take place in Prospect Park as part of the culmination of the Brooklyn Borough President Eric L. Adams’ “A Summer Movie Under the Stars” program, which will be airing four Captain America-focused movies every Wednesday from July 20th to August 10th.

“To the rest of America and the world, he’s Captain America; to us, he’ll always be Steve Rogers, ‘just a kid from Brooklyn,’” said Borough President Adams. “Brooklyn is proud to be the base of celebrations for Cap’s 75th anniversary, which will be capped by a larger-than-life statue traveling around our borough — befitting of this larger-than-life character. Prospect Park is the place to be this summer to enjoy the Captain America!”

After the half-month stop in Prospect Park, the Captain America statue will move to the plaza outside Barclays Center on Atlantic and Flatbush Avenues for September, during which several Marvel fan activations take place. From late October through the remainder of the year, the statue will adorn the soon-to-be-opened Bed Bath & Beyond® in Sunset Park, Brooklyn. Fans of all ages will enjoy a specially re-designed statue base, for heightened interactivity and photo opportunities with Captain America, as well as see and shop for a variety of unique Marvel items, including limited quantities of scaled replicas of the bronze statue itself.

“Since 1941 Captain America has remained one of the most influential Super Heroes in comic book history,” said Paul Gitter, senior vice president, licensing, Marvel at Disney Consumer Products. “He has evolved as a character throughout the years, but remains constant as a moral compass within the Marvel Universe and leader of the Avengers. The tribute statue and other activations are the perfect way to honor 75 years of this iconic Super Hero and to celebrate the borough of Brooklyn in New York City.” 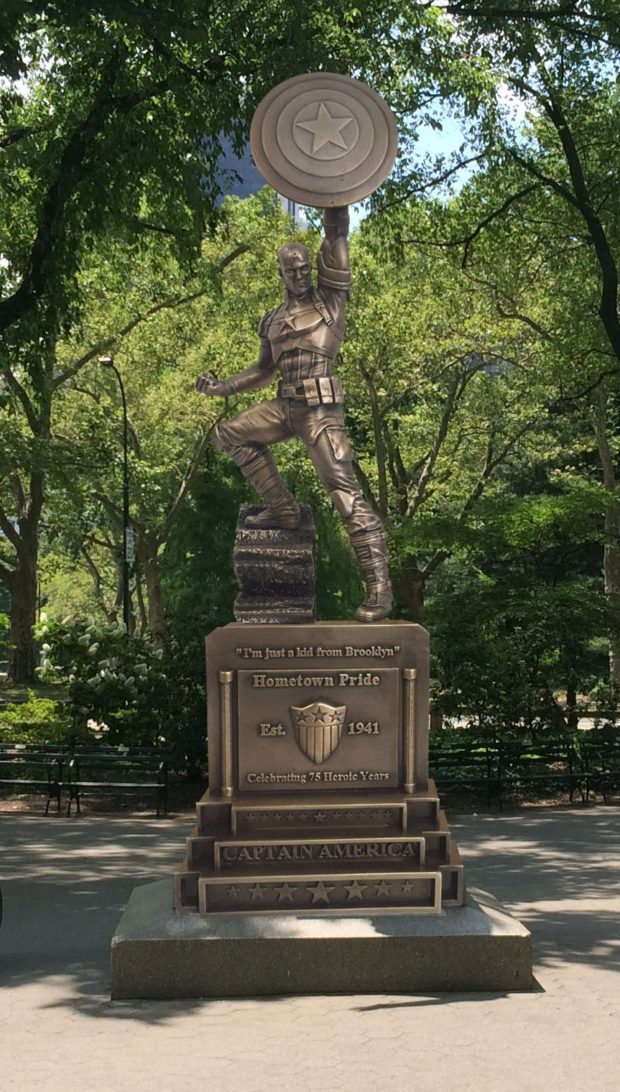 Also joining the 75th celebration at San Diego Comic-Con are Marvel’s leading merchandise partners including Hasbro, Funko, and Jakks Pacific who will be commemorating “Cap” through new collectibles. As previously announced, Comicave Studios will also be offering different scales of replicas of the bronze statue itself at San Diego Comic-Con.  Additional licensees including Mad Engine, Mighty Fine, Freeze, C-Life, Her Universe, What’s Your Passion, Nick Graham, Café Press, Jay Franco, Kiddesigns, HJC Helmets and more will all feature new Captain America merchandise at major retailers this Fall.  These collections will highlight Captain America’s iconic shield and cover categories including apparel and accessories for kids, women and men, home goods, electronics, and toys. There will even be new Brooklyn-themed artwork available for a range of apparel and accessories.