It’s the 50th Anniversary. Of course there’s going to be a lot of Star Trek at Comic-Con. The place has become a Celebration of the Popular Arts, and there is no popular art that Star Trek has not conquered — except maybe video games. Not only will Paramount pull out all the stops with the world premiere of Star Trek Beyond, they just may end up dominating Hall H.

Announced today in Variety,  “Star Trek: Celebrating 50 Years” will be held on July 23rd at 2 p.m. Hosted by Bryan Fuller, the panel will start the big push for the upcoming streaming television series Fuller is creating. Though that’s exciting, it’s the first 50 years fans want to laud, so Fuller has all the big guns he can handle. William Shatner joins Fuller, along with Michael Dorn (Worf), Jeri Ryan (7 of 9), Brent Spiner (Data), and Scott Bakula (Captain Jonathan Archer) to talk about all things Trek. I’m pretty sure among them they cover every television series, including the animated one (which is allegedly canon again).

The premiere of Star Trek Beyond is touted as the first outdoor IMAX premiere, being held  Wednesday, July 20 at the Embarcadero Marina. Not only will cast members be on hand, but the San Diego Symphony Orchestra will perform selections from Michael Giacchino’s score. Having attended last year’s Star Wars symphony event in the same venue, I can safely predict it’s going to be one heck of an event.

But there are other panels, narrowing down the tracks of the Convention, but all no doubt of interest to various Star Trek fans.

Offsite, there’s an exhibit called “50 Artists. 50 Years.” The specific gallery will likely be announced later this week, but some of the work is displayed online, and it looks like a fun celebration of Star Trek’s inspirational effect. One of the piece is actually a work by the late Leonard Nimoy, entitled “Hand in Vulcan Gesture.” 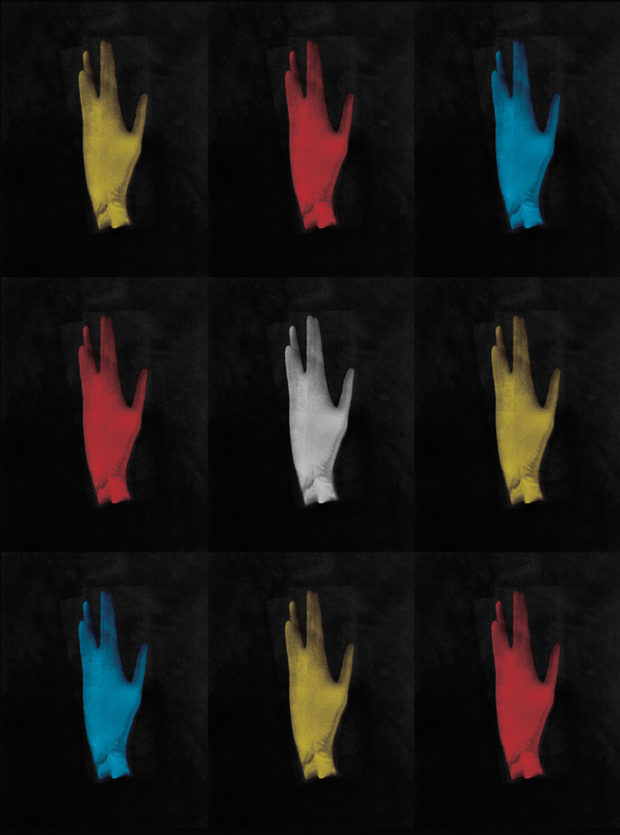 We should also point out that the Hallmark booth will have one Star Trek Comic-Con exclusive ornament — a replica of the original Enterprise, with a lengthy sound clip of William Shatner’s original narration and Alexander Courage’s iconic theme. At Hallmark stores across the nation starting July 9th, you can get a gold version of the ornament — but the accurately detailed painted version is only at Comic-Con International and New York Comic Con. 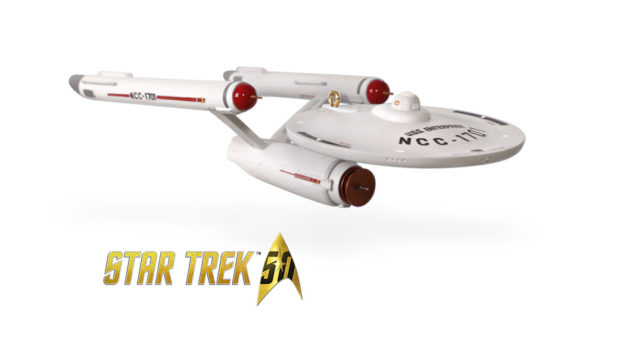 And one last thing — you might want to head to your local Hallmark shop anyway this weekend, because they have an Ensign Chekov ornament available while supplies last as part of their ornament premiere this weekend, starting July 9! 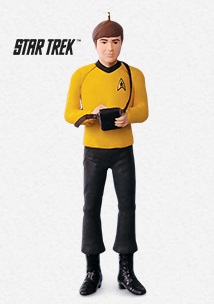 Or you could just pick up this very festive ornament that perfectly captures the spirit of Christmas: 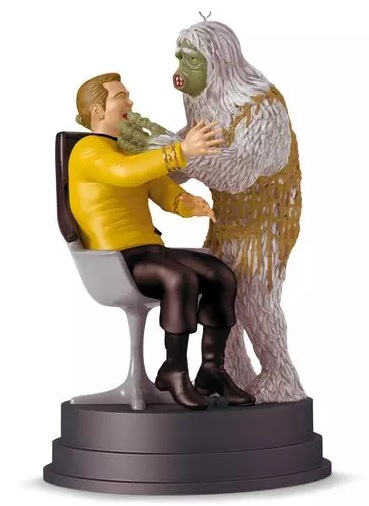