Last year, Amazon got a lot of superhero fans excited by announcing a pilot for a revival of The Tick. Created by Ben Edlund, the nigh-invulnerable and strangely oblivious superhero has gone through several incarnations onscreen, getting a little darker each time. The pilot starring Peter Serafinowicz debuted last Fall, and Amazon is moving forward with it as a series on Amazon Prime. To celebrate, and to get fans excited for its August debut, The Tick will be taking over a section of San Diego.

Amazon’s Tick Takeover will offer an interactive experience that isn’t just limited to one location on the MLK Promenade. Convention attendees can call on help from #TeamTick in the streets surrounding the Promenade. Considering how sometimes the Tick’s help can be a bit dangerous, one hopes they have limits.

Still, check out the press release below and marvel at the thought of 20-foot tall audio-animatronic Tick antennae. We’ll post pictures as soon as we have them — right now, it’s concept art.

This summer, a beloved comic-book favorite is back and more hilariously righteous than ever. Amazon Prime Video will be making its first foray into the hero universe with its’ Amazon Original Series, The Tick. The retail pioneer partnered with Sony Pictures and the creative team behind such pop-culture- defining work as Buffy the Vampire Slayer, Men in Black and Christopher Nolan’s Batman films to bring this cult-favorite to life. With its scabrous original storylines, kinetic action, and wryly inventive visual style, The Tick is sure to be a big blue hit at San Diego Comic-Con 2017. 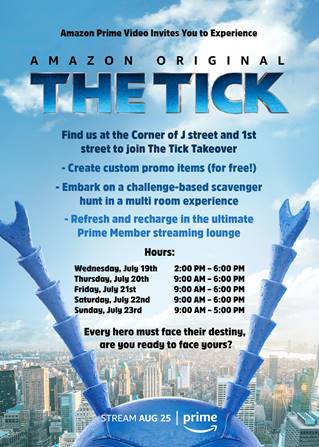 Starting July 20th, consumers will have the opportunity to immerse themselves into the world of The Tick at Amazon Prime Video’s Tick Takeover, a movie set level design experience positioned directly across from the San Diego Convention Center on MLK Promenade (on the corner of 1st and J street). With fully built out buildings from “The City,” a twenty-foot tall animatronic Tick head and “Easter eggs” harkening back to the show, The Tick Takeover is poised to give fans the journey of a lifetime. Each “Citizen” will leave this enveloping SDCC highlight feeling more connected to the Amazon Original Series than ever before. Additional details include:

Unexpected queueing experience – Visible from all major landmarks at SDCC, an animatronic replica of the Tick’s head will surprise and delight citizens as they learn they are able to control the Tick’s “emotions” using levers that operate the giant 20ft animatronic build.

Challenge-based scavenger hunt – Citizens will be asked to help the Amazon Original Series’ two main protagonists, Arthur and The Tick, take down a group of evil-doers and prove that they too can be heroes. This multi-room experience will take place in four locations essential to the series storyline – Goat’s Deli, Arthur’s Apartment, The Warehouse, and The City Police Station.

Amazon Prime Member Lounge – a comfortable, cool environment where Citizens will have the chance to experience Amazon Prime benefits as they stream the pilot episode of the Amazon Original Series, The Tick. Attendees can also unlock digital badges hidden within the space to win exclusive promotional items just like those found on sites similar to Promotion Choice in the USA. 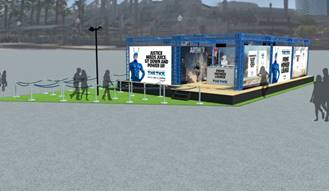 During their adventures at SDCC, Citizens will be able to call upon the #TeamTick street team for help when they are in a bind. Need help with that selfie? Have a painful blister? Have no fear… Team Tick is here! In true Tick form, Team Tick will be taking to the streets of San Diego helping the helpless and defending the defenseless. Citizens seeking assistance from the street team need only flag down a member of Team Tick, adorned with blue antenna, to get help for their distress. 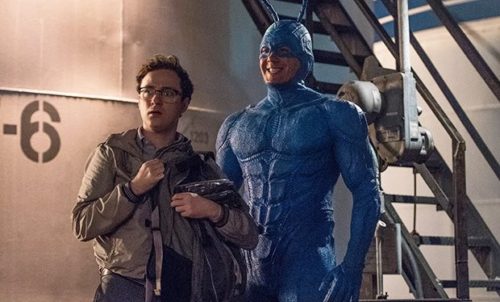 Season one of the new Amazon Original series, The Tick is streaming on August 25, exclusively on Amazon Prime Video.

About The Amazon Original Series, The Tick

Bursting with scabrous original storylines that turn on a dime, The Tick is a comedy with kinetic action, a wryly inventive visual style and crisply quotable dialogue. Heroes have flown among us for decades but mild-mannered accountant Arthur Everest (GRIFFIN NEWMAN) one day finds out there are also genuine bad guys in this new Amazon Original Series. He believes he has proof that The City, where he was born and raised, is actually controlled by a global super-villain known as the Terror (JACKIE EARLE HALEY). Destiny soon brings Arthur together with an eccentric, tall, blue-suited muscleman with a mysterious past and list of superpowers: The Tick (PETER SERAFINOWICZ). The title character serves as both the conscience and the unchecked id of the story. Citing the call of destiny, the Tick procures for Arthur a moth outfit with retractable wings and insists that he suit up as his sidekick. He and Arthur are the ultimate odd couple, but may just bring out the best in each other. In their quest to take back The City, the unlikely pair of heroes quickly sees just how complex the struggle between good and evil has become.