A demon, a masked man, and the coolest spy in literary history have one thing in common: they’ve all been featured in comics from Dynamite Publishing. This summer, in preparation for Comic-Con 2018 happening this week, Dynamite has announced major relaunches for all three characters, and they sound… well, dynamite.

The first announcement this morning was KISS: Blood and Stardust. Written by Bryan Edward Hill and rendered by Rodney Buchemi, the book asks the (ear-bleeding) musical question, how do you stop an immortal cabal from killing innocents when you yourself are dead? Let’s all agree right now that the reports of KISS’ death are grossly exaggerated, and that they’ll come back to fight evil and still rock and roll all night. 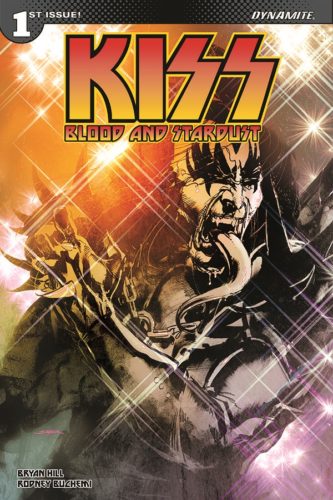 KISS: Blood and Stardust will be available in October at comics shops and digital platforms. But that’s not all you can order from Diamond and Dynamite from the August Previews catalog — they’re also bringing KISS trading cards, likely much higher in quality than the cards first released by Donruss in 1978. This new set includes a combination of classic photos and renditions of the band by top artists.

“KISS trading cards are some of the most collectible memorabilia out there, they’ve been around since the early days of the band,” said KISS co-founder Gene Simmons. “These new cards add to the tradition and the lore of KISS and I can’t wait for fans to get their hands on them.”