Greg Pak writing Joss Whedon’s Firefly. That’s all I needed to know. Oh, there’s more. It’s for BOOM! Studios, which was partially owned by 21st Century Fox, which means it may be about to be owned by Disney — and Firefly (at least the television series) is a Fox property. Which means it’s a Disney property.

For those confused by the excitement here, Firefly was a science fiction western mash-up (I admit, that falls short of doing it justice) that ran for less than one season but spawned a huge cult following. With good reason, because it is a good show, with characters you can’t help but fall in love with, led by Nathan Fillion as Captain Malcolm Reynolds. Set after humanity has spread throughout the stars — and warred among themselves in the process — the series follows Captain Mal’s crew on the Firefly-class ship Serenity, eking out a living doing transport and occasionally getting into trouble doing the right thing. As we know in the real world, the right thing all too often is the most difficult thing to do.

Fox allowed Whedon to shop Firefly around as a movie concept, which led to the film Serenity. As it didn’t exactly light box office on fire, that’s where the franchise ended, except for in comics. Now BOOM! Studios has it, and have put together a great creative team, while also delivering a collection of the previously published material done at Dark Horse Comics. 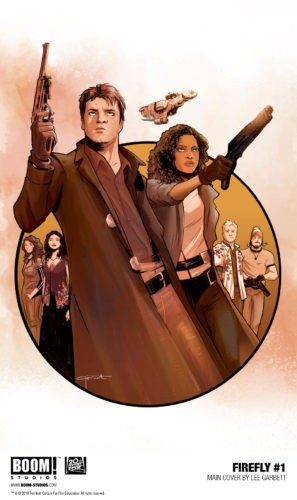 BOOM! Studios is proud to kick off The Road to San Diego, a ten-day spotlight on the most exciting comic book and graphic novel news in advance of Comic Con International in San Diego (July 18-22), with the announcement it has acquired the comic book and graphic novel publishing license to Joss Whedon’s FIREFLY, the iconic worldwide pop culture phenomenon. BOOM! Studios will release new monthly comic book series, limited series, original graphic novels and more that officially expand the rich mythology created in television, film and beyond in partnership with 20th Century Fox Consumer Products.

Created by visionary writer and director Joss Whedon (Buffy The Vampire Slayer) and set 500 years in the future in the wake of a universal civil war, FIREFLY centers on the crew of Serenity, a small transport spaceship that doesn’t have a planet to call home. Captain Malcolm “Mal” Reynolds, a defeated soldier who opposed the unification of the planets by the totalitarian governed Alliance, will undertake any job — legal or not — to stay afloat and keep his crew fed. Thrust together by necessity but staying together out of loyalty, these disparate men and women are seeking adventure and the good life, but face constant challenges on the new frontier, such as avoiding capture by the Alliance, and evading the dangers you find on the fringes of the universe.

Beginning in November with the release of FIREFLY #1, from New York Times best-selling writer Greg Pak (World War Hulk, Mech Cadet Yu), artist Dan McDaid (Judge Dredd), and story consultant Joss Whedon himself, BOOM! Studios will take you back to the battleground where it all began…and reveal a secret history that might end it all. Fans have demanded it for years and now the definitive story of the Unification War—the intergalactic civil war that divided friend and family alike—is told at last!

“It’s high time we got to see the full story of Mal and Zoe’s meeting and mission in the War of Unification—the good and bad that the pressure of war brings out in them, and the unforeseeable consequences,” said Joss Whedon. “Greg Pak and Dan McDaid are bringing a unique voice to the world of Firefly. It’s an important story for any dedicated browncoat to read, but more importantly, it’s a big gorram adventure.” 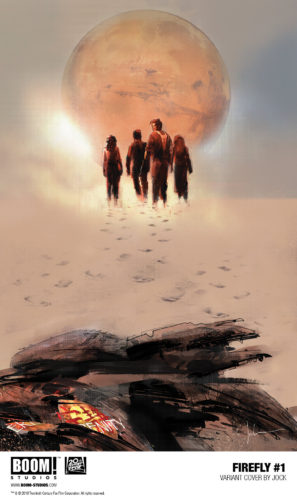 “Firefly is such a special show, formative for so many of us today in the kinds of stories it told and the kinds of characters it created and we’re so lucky to be able to continue Mal and Zoe and the rest of the crew’s story here,” said Jeanine Schaefer, Executive Editor, BOOM! Studios. “Exploring the Unification War allows us to show you a side of the Firefly universe you’ve never seen before, while still wrestling with the same themes that make the show as resonant today as it was when it first aired: loyalty, identity, and the price of redemption.”

Mal thought he could outrun his past, but when a simple heist goes wrong, he’s forced to confront it in the form of the Unificators, mercenaries deputized to hunt down war criminals…and they’ve got Mal and Zoe at the top of their list! War can make villains of even the best men, and Mal’s quest for redemption will put him at odds with his own crew, forcing him to make a choice: fix the past or fight for the future.

“I was a sci-fi nerd who grew up in Texas, so Firefly’s space western vibe had me from howdy. I also just love the show’s combination of humor and action with honest emotional storytelling,” said Greg Pak. “That’s a real sweet spot for me as a fan and a creator, and I’m thrilled to be able to join in on the fun. These characters are a dream to work with—they’re all so well defined and interestingly matched with such great relationships and rivalries that putting any two of ’em together almost immediately results in a great scene. And the fact that the worldbuilding and big themes of the series are so compelling but still leave miles of room to explore means that the door’s wide open for fantastic new stories. I’m honored and thrilled to join the crew and can’t wait ’til you see what we have planned.”

“Firefly the show kind of passed me by the first time, but I adored the feature film Serenity (it was a first date movie for me and my partner!) and I’ve since gone back and devoured that one brief, beautiful season,” said Dan McDaid. “It’s amazing to be able to bring you even more from that world and to work with Greg Pak, the guy who wrote the best run of Hulk comics in the modern age! That’s so huge for me and it’s still sinking in. I honestly can’t wait for you to see what we’ve got lined up; this comic book is going to be—in the truest sense—epic.”

FIREFLY #1 is available exclusively in comic shops (use comicshoplocator.com to find the nearest one) on November 14, 2018 with a main cover by superstar Lee Garbett (Skyward), along with variant covers by Jock (Batman), J.G. Jones (Final Crisis), Bill Sienkiewicz (Daredevil), Joe Quinones (America) and more.

Arriving in stores the same day, FIREFLY: LEGACY EDITION BOOK ONE collects previously released Serenity comics for the first time under one cover in a new value-priced format as Mal & the crew ride again in these official sequels to the critically acclaimed Firefly television series and Serenity film. 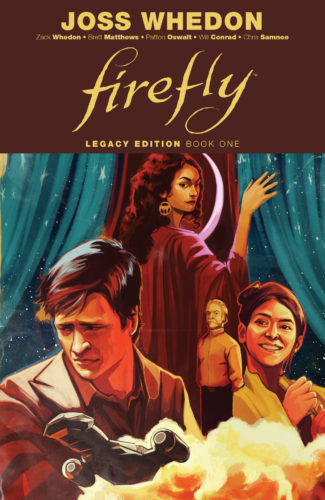 For continuing news on FIREFLY and more from BOOM! Studios​, stay tuned to www.boom-studios.com and follow @boomstudios on Twitter. 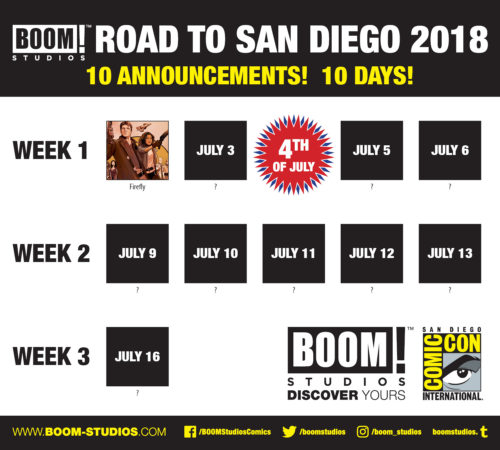