It’s odd to say this about a comic that comes out once a year, but one thing that stands out about Guns A’Blazin’ #6 is its pacing. Artist Rafael Navarro knows how to make writer Mike Wellman’s action scenes swirl almost out of control, reflecting the dandy Eduardo’s seemingly chaotic approach to solving problems. And then… there’s a silence that falls over the book, or a respite with party music in the background. (There is a soundtrack album available for this last issue.) Wellman and Navarro give their story room to breathe, while making it breathless.

There’s two ways to read it, too, given that year between issues thing. As a fast-paced book where anything goes — two guys who appear to be cowboys from the 1800s drive a roadster around a spaceship, pursued by a viking maiden and a wizard, for instance — the first read has to be “just let it happen, man.” Somehow I think Eduardo would agree.

On the other hand, because the story bats time around like two kids playing tetherball (“time is a sinewy mistress”), it’s going to bear re-reading all six issues consecutively. Some books work better as binge reads; my instinct says Guns A’Blazin’ is fine either way. Somehow it reminds me of being a kid picking up a comic that was the middle of an arc and simply not caring that I had missed the beginning because I just wanted to know what these characters were doing now. Ed and Kody, the two cowboys and clear alter egos of Navarro and Wellman, are those kinds of characters. There’s a little philosophizin’, a little drinkin’, and a lot of adventurin’, and it’s just fun. But it may be more.

The book promises that this is only the beginning, but the way it’s written, it also ties up as neatly as you might expect Ed to let it. Not very neatly, because Ed’s a go with the (time)flow kind of guy, but it’ll do. I already want more. 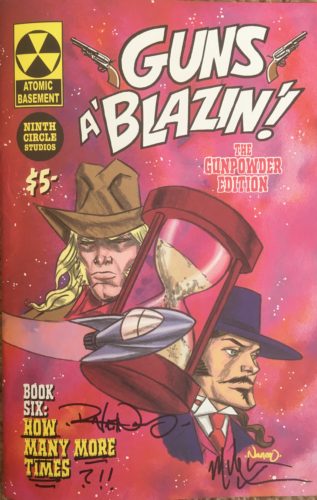 You can pick up Guns A’Blazin’ at Wellman’s store, The Comic Bug, in Manhattan Beach and Culver City, as well as Illusive Comics & Games in Santa Clara. I’m sure there are many other fine establishments carrying this high-quality readin’ material; I just don’t know which ones they are.