Since Darth Vader acts as the boogie man to real children anyway, why not show how he’s used in storytelling in a galaxy far, far away. Mix it with terrific writers and artists like Cavan Scott, Derek Charm, and Francesco Francavilla, and you’ve got a book that may be scary, but mostly appropriate for kids.

Following in the footsteps of Star Wars Adventures, Tales from Vader’s Castle remind us that he’s one of the most frightening figures in the Star Wars Universe. And so stories have arisen. Five of them (at least) will be told throughout the month of October, with all-star contributors wrapping up a nice package.

IDW Publishing invites readers of all ages to explore the creepiest corners of the Star Wars universe in Star Wars Adventures: Tales from Vader’s Castle, a thrilling five-part comic book event with new issues hitting stands every Wednesday in October. Fan-favorites Cavan Scott and Derek Charm team up with an incredible roster of guest artists for this special miniseries, just in time for Halloween. 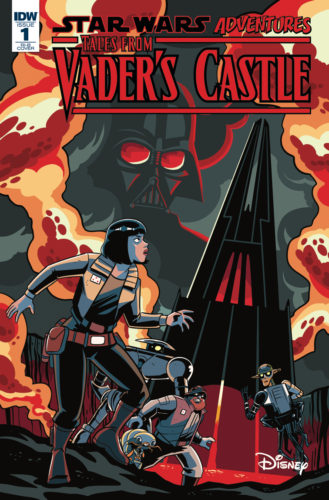 “I’ve always loved scary stories, and where better to tell them than the lair of Darth Vader himself?” says writer Cavan Scott. “Being asked to write any Star Wars character is a joy, but tackling the Dark Lord of the Sith? That’s a childhood dream… or should I say, a nightmare! Vader terrified me growing up, and I can’t wait to add to the legacy of Star Wars’ villain, providing frightening new scares for the next generation.” 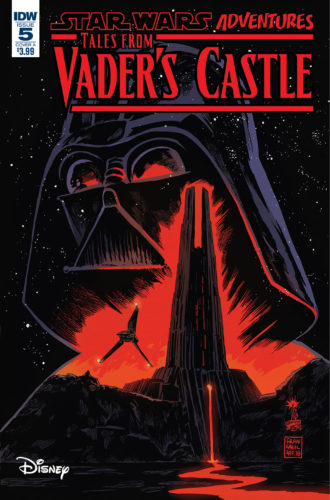 The weekly series features beloved characters from throughout the galaxy, including Rebels stars Hera, Kanan, and Chopper; Obi-Wan Kenobi and Count Dooku; Han Solo and Chewbacca; and the Ewoks! What frights and scares await them in Darth Vader’s castle?

Artist Derek Charm says, “Since this is a spookier story about these characters stranded on this nightmarish planet, it’s been fun really pushing the horror aspect in the art. The shadows are heavier, the colors are harsher, and everything has this apocalyptic vibe… like things may not work out for our heroes!”

“We’re thrilled to welcome the creepy Cavan Scott, the frightening Francesco Francavilla, and an array of eerie artists into the creepiest corners of the Star Wars universe for Tales from Vader’s Castle,” says Michael Siglain, Creative Director of Publishing for Lucasfilm. “There’s no better way to celebrate Halloween than with these spooky stories from a galaxy far, far away.”