For years, filmmaker Lon Lopez has been crafting chapters of his epic Action Figure Action Movie. The latest installment, “The Furious Gospel of Johnny Tan,” debuted last summer, and this year gets one of the highest honors that former podcast contributor Lopez could hope for: screening at Comic-Con International in San Diego. It’s like giving back to all his influences at once.

Scheduled as part of the San Diego Comic Con International Film Festival, the epic short plays Friday, July 19 at 2:50 pm, followed by a Q&A with Lopez and voice of Johnny Tan, actor Jeff Brown. Free to Comic-Con attendees, the CCI-IFF takes place in the convention facility of the Marriott Marquis and Marina Hotel, next door to the Hall A side of the San Diego Convention Center. The Film Festival room is Marriott Grand Ballroom 6, which is located on the second level of the building. Look for signage onsite directing you to the screening room. 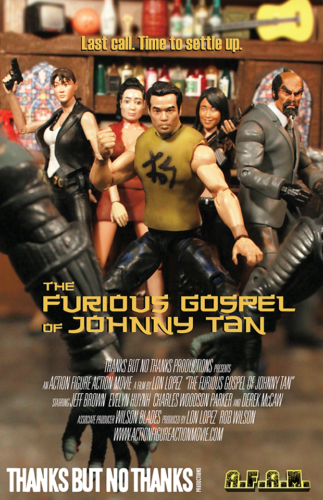