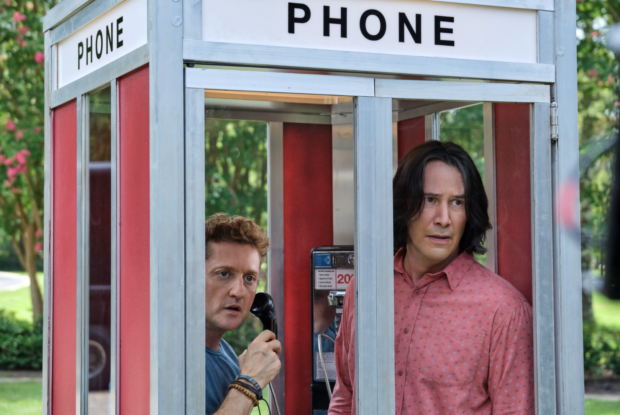 As filmmaker/podcaster/slackonteur Kevin Smith admits, without Bill and Ted there would be no Jay and Silent Bob. Today at ComicCon@Home, Smith got the chance to tell screenwriters Ed Solomon and Chris Matheson and actors Alex Winter and Keanu Reeve how much he owed them. And as it turns out, Solomon and Matheson actually played Bill and Ted long before the movies were made.

Smith led a pretty spirited discussion with them, joined by director Dean Parisot and actors Samara Weaving, Bridgette Lundy-Paine, and William Sadler. The slight awkwardness of doing it all by Zoom was more than offset by someone doing a heck of a job directing the focus from behind the scenes. But see for yourself, as we’ve been given permission to share the actual panel. Be warned — Smith calls this film a real tear-jerker.

The stakes are higher than ever for the time-traveling exploits of William “Bill” S. Preston Esq. (Alex Winter) and Theodore “Ted” Logan (Keanu Reeves). The now middle aged best friends set out on a new adventure to seek the song that will set their world right and bring harmony in the universe, with the helped by their daughters (played by Samara Weaving and Brigette Lundy-Paine), a new batch of historical figures and a few music legends. The film also stars Kid Cudi, Kristen Schaal, Anthony Carrigan, Erinn Hayes, Jayma Mays, Jillian Bell, Holland Taylor, Beck Bennett, William Sadler, Hal Landon Jr. and Amy Stoch.
BILL & TED FACE THE MUSIC will be released on demand and in theaters on September 1, 2020.