As if Skywalkers rising wasn’t enough, Disney followed the Star Wars part of its panel this morning with Marvel Studios’ Kevin Feige making even more big announcements. While possibly not as epic as his presentation on Disney+ the previous day, Feige as always leaves his mark.

First up, director Ryan Coogler came on stage to announce that Black Panther II (not the actual title) has set an official May 6th, 2022 release date, with Coogler returning to direct. They had no further details, for as Coogler said, “We’re not taking our time, we’re really trying to get it right.”

The cast of The Eternals came on stage with a sketch showing off their costumes (see below) and three more additions to the line-up – Dunkirk actor Barry Keoghan as Druig, Crazy Rich Asians actress Gemma Chan as Sersi (a different role than she played in Captain Marvel), and former Game of Thrones”star Kit Harington announced today as Dane Whitman, the Black Knight.

The Black Widow cast wasn’t on hand as they’re currently in the midst of additional filming, but the Comic-Con trailer was played again for the crowd though a few additions were made to the clip including David Harbour fully suited up in a comics accurate Red Guardian helmet and costume, and a bonus scene at a gas station where Yelena makes fun of Black Widow’s fighting pose.

While there was no mention of Spider-Man in the panel Fiege was obviously asked about it by media. “I’m feeling about Spider-Man gratitude and joy. We got to make five films within the MCU with Spider-Man: two standalone films and three with the Avengers. It was a dream that I never thought would happen. It was never meant to last forever. We knew there was a finite amount of time that we’d be able to do this, and we told the story we wanted to tell, and I’ll always be thankful for that.” 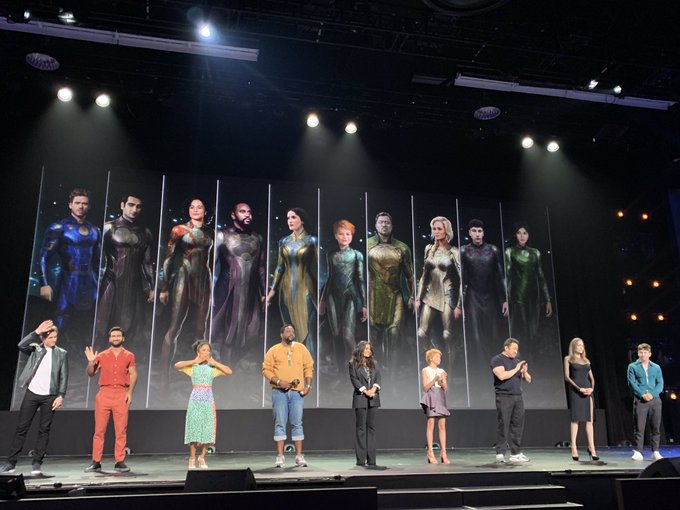