One day ahead of “Batman Day,” DC has made the long-rumored change official: DC Universe, the hybrid streaming service/comics library, will transform into something new. The original programming from DC Universe will go to HBO Max, with one omission (at the moment). In place of DC Universe will be DC Universe Infinite, which both expands and contracts from what the previous version was. But with DC, that’s the way every time the universe reforms after a crisis.

What expands: the comics library, and not just in terms of legacy books. Though it seems the service had been pretty good about its timing, DC Publisher and Chief Creative Officer Jim Lee has committed to new books being only six months behind the hard copy publication. But wait — there’s more. As we’ve talked about on the last couple of podcasts, DC is entering a new era of digital publication, and the digital first books available on Comixology will be showing up on DC Universe Infinite before publication for comics shops and bookstores. Those include

as well as new and apparently exclusive digital content, not yet being identified. Some of those titles are interesting — tied as they all are to popular transmedia properties, but with at least three whose print books are ending in the next couple of months.

From the press release:

“Our fans love the platform’s robust library of comic books and, with the transformation, we will not disappoint,” said DC Publisher and Chief Creative Officer Jim Lee. “I’m excited to share that not only will DC UNIVERSE INFINITE members still be able to read all of the great comics that they’ve enjoyed but new issues are debuting on the platform quicker than before, digital first exclusives are being created, and the members-only events will begin as soon as possible. There has never been a better time to be a DC fan!”

Along with this announcement, it’s also finally confirmed that Harley Quinn will get a 3rd season, and will be an HBO Max exclusive going forward. Of course, because it seems like all of the shows will now be exclusive to HBO Max — Young Justice Seasons 1-4, Titans
Seasons 1-3, Doom Patrol Seasons 1-3, and DC’s Stargirl Season 1. That will be in addition to the previously announced Strange Adventures, Green Lantern, and unnamed Justice League Dark project from Bad Robot.

Where does that leave Swamp Thing? The omission bothers me, as it seems to be doing well on the CW. Perhaps the intention is for it to be folded into that Justice League Dark series. From the digital first comics line, it’s obvious fans love the character and DC knows it. 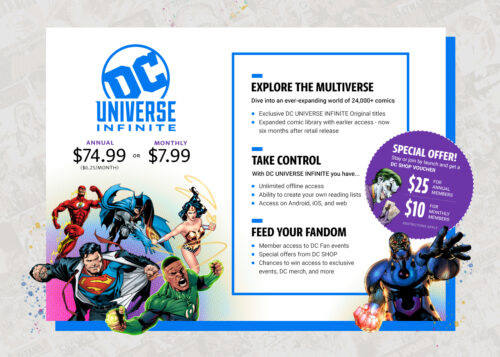 The first hint this was coming was when HBO Max launched with Doom Patrol, though at the time an industry vet told me that it was because season 1 had been shown on HBO internationally. (DC Universe was US only; DC Universe Infinite will have a global roll-out some time in 2021.) Then Harley Quinn shifted over. Then DC Universe stopped taking annual subscriptions but did offer subscribers a special discount price to subscribe to HBO Max. A month ago, subscribers were given a survey about DC Universe which consisted entirely of questions asking if we were subscribing to HBO Max and if not, why not? That was followed by a survey that at least acknowledged that subscribers liked comics — and DC confirms that current subscribers will be rolled over into the new service while reinstating the ability to subscribe annually.

Pricing will be about the same as the Marvel Comics Unlimited service. The crisis has passed, and we can still access DC Comics online — the good, the bad, and the New 52.