In DC Comics’ Batman issue #32 Bruce Wayne tells Selina Kyle, Catwoman, that he had a moment in his past when he almost broke his cardinal rule of never killing, when he almost killed the Riddler. Four months previous to his confession to his longtime girlfrenemy he asked her to marry him. He felt before she could say yes or no he needed Selina to know everything, all the truths from both of their lives.

Catwoman confesses that all of their pain and suffering won’t overcome their love for each other, and that after Bruce asks again, her answer is “Yes”. 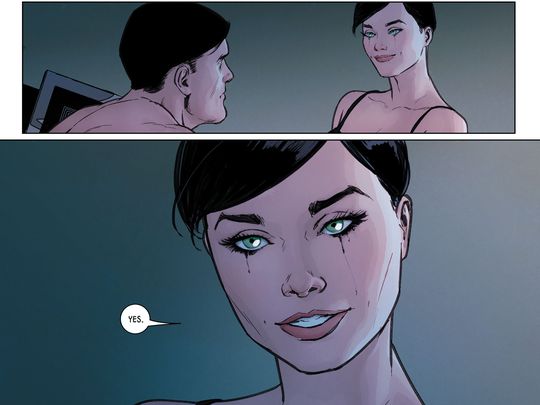 “That to me is what true love is,” says writer Tom King. “It’s showing who you truly are to someone. It’s letting someone know deep down who you are and that’s horribly frightening and it scares Batman as much as anything ever has.”

However, King adds, “they’re two broken people, and because they’re broken, they have the edges that fit together.”

The good news for those who hoped to see Batman and Catwoman marry is that this won’t be the end of their journey together. Batman #50 is not the end. This is a 100 issue story documenting and celebrating the love of Batman and Catwoman. Whatever happens, whatever anyone says, nothing’s going to spoil that.” says King.

Although a twist led directly to the new Catwoman #1, this has been an incredibly popular run on the character by King, who has also rejuvenated Catwoman in her potential own long run. Batman #50 and Catwoman #1 are now available.