(Editor’s note: In 2002, Daniel DeFabio and I worked with Creative Light Entertainment on Mark Hamill’s mockumentary Comic Book: The Movie. The year afterward, Mark and the staff at Creative Light held a dinner at Comic-Con in honor of Stan Lee, who had a cameo in the film and, of course, was Stan Lee. To mark his sad passing today, I dug into the archives to find Daniel’s original article about that night — originally posted in the summer of 2003.)

Thanks to Mark Hamill, a dream of mine came true. I met Stan “the Man” Lee. Stan is for me (as I’m sure for many of you) a mixture of hero, muse, patron saint, guiding creative force and more. Friday the 18th at Comic-Con San Diego, Stan stopped by the booth for Comic Book the Movie. (He is interviewed by Don Swan – played by Mark – in the film.) I had only time to shake his hand and exchange the basic praises “It’s a great thrill to meet you.” I think I said.

He commented on the cute girl in the booth wearing her “Have Courage!” t-shirt. I offered him one to wear himself. “Are you kidding? I can’t wear t-shirts they make my arms look too skinny.”

A crowd began to gather around him. I mentioned he was a bigger draw than the lovely model dressed as Liberty Lass. He said something like “there must be something wrong with these people, look at her.” And then Stan had to dash off to his other booth promoting “Who wants to be a Superhero?” his new reality TV show for WB.

But the best was yet to come. That night Stan was to join Don Swan, Mark Hamill and the folks from Creative Light Entertainment for dinner. As editors of this site Derek McCaw and myself were invited to attend. Rob Worley of www.comics2film.com was also invited. Silly me I was late to arrive, but luckily Stan was later.

I found most seats were taken and Derek and Rob had the good fortune of sitting across from Baywatch Babe Donna D’Errico. I mentioned to them that they had the best seats in the house. Then Stan Lee arrived.

The talented voice over actors who appear in Comic Book the Movie quickly surrounded Stan and serenaded him with the themes to the Hulk and Captain America (1966 era). 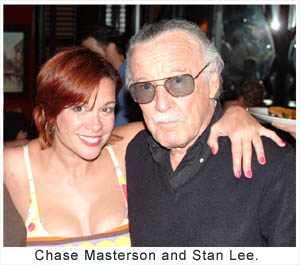 To be honest Stan’s attention was dedicated mostly to the lovely Ms. Masterson but I did manage to get a few edge-wise words in. I told Stan that much like Robert Fulghum’s book “Everything I needed to know I learned in Kindergarten,” everything I needed to know I had learned from Marvel comics. How to read, how to write, how to draw (the Marvel Way), and how to appreciate Norse myth, which I still do. I mentioned my high school rock band was named MJOLNIR and I had the hammer of Thor on my bass drum. He laughed and said I owed him royalties.

Later with Derek and Rob we talked to Stan about his comics to film adaptations. He said Spiderman was his favorite so far. He was thrilled and amazed that the FX technology is now at a point where his stories can be told on the screen. 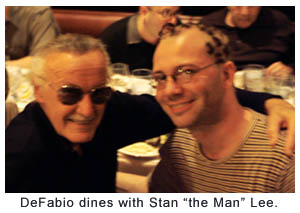 Although he had a favorite Marvel character film, when I pressed him to choose his favorite child (of his comic book creations) he said he couldn’t. They were all his favorites. “And it depends on when you read them. Who’s drawing them. Who’s writing them. Everyone does something different with each one. I can’t keep up with reading the books these days.”

Stan was amazingly charming, jovial and soon I felt he could be my grandfather. In a creative muse sort of way I guess he is.