For some of us, this is a major find in film history. The Walt Disney Company and the British Film Institute announced yesterday that they have recovered an Oswald the Lucky Rabbit short long thought lost. As often happens with massive film archives, it turns out that the print had been in the BFI archives all along, and was recently rediscovered by a researcher browsing through the catalog.

Animated by Walt Disney and Ub Iwerks, “Sleigh Bells” had a release year of 1928, so it was made sometime in the year or so after Disney and Iwerks originally created Oswald. Since Mickey Mouse’s debut short “Steamboat Willie” also had a release year of 1928, this makes “Sleigh Bells” one of the last Oswald shorts done by the duo before Disney lost control of the character.

The silent film character serves as a precursor to Mickey Mouse in many ways, and when the company regained control of Oswald in 2006, they repositioned him as Mickey’s forgotten older brother in the videogame Epic Mickey. He has many of the same traits: playfulness, good-heart, but an “impish” sense of humor that borders on sadistic (that was eventually ironed out of Mickey). 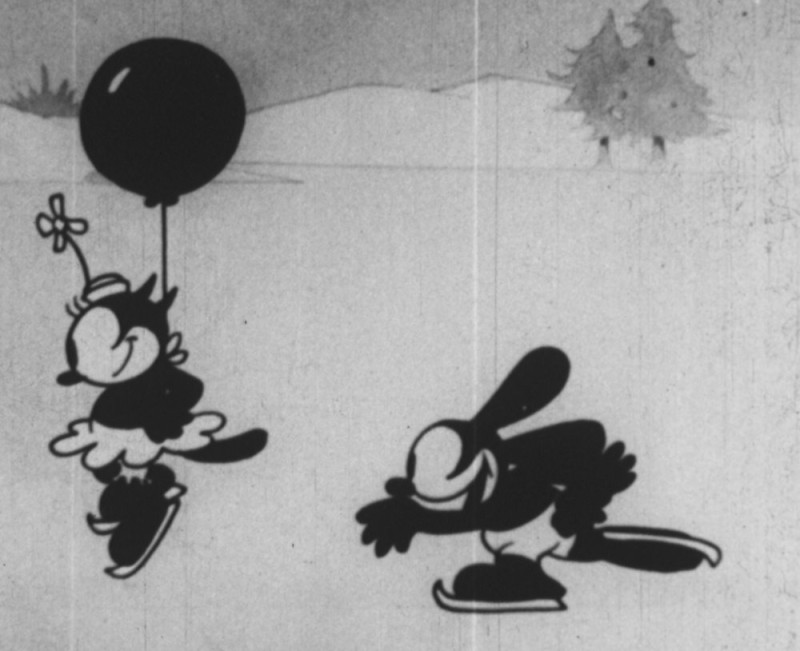 Originally created at the request of Carl Laemmle for Universal Studios, Oswald could have been the biggest cartoon star in the world. But Disney’s supervisor Charles Mintz cut the budget and hired most of Disney’s team away from him, which sparked the legendary animator to create Mickey with Iwerks. Universal Studios could not match the quality and popularity of Mickey, and Oswald faded into obscurity, though there are a few shorts featuring the character produced by Walter Lantz of Woody Woodpecker fame.

Disney Chairman Bob Iger made overtures to Universal Studios in the 21st century, trading rights to the character for sportscaster Al Michaels’ contract. Said Michaels, “I’m going to be the answer to a trivia question someday.” Michaels provides sports commentary for NBC, and Oswald now runs a gas station in Disney California Adventure, as well as appearing in an ever-growing catalog of Disney merchandise.

Disney Studios have made a new negative of “Sleigh Bells,” as well as several digital copies. BFI will re-premiere the short on December 12, 2015, in a program called “It’s a Disney Christmas: Seasonal Shorts,” featuring other Disney cartoons from the 1930s through today. In their joint press release, Disney Animation also revealed that they have been working with private collectors and other film archives to try and find other lost Oswald shorts, so there could be more to come! 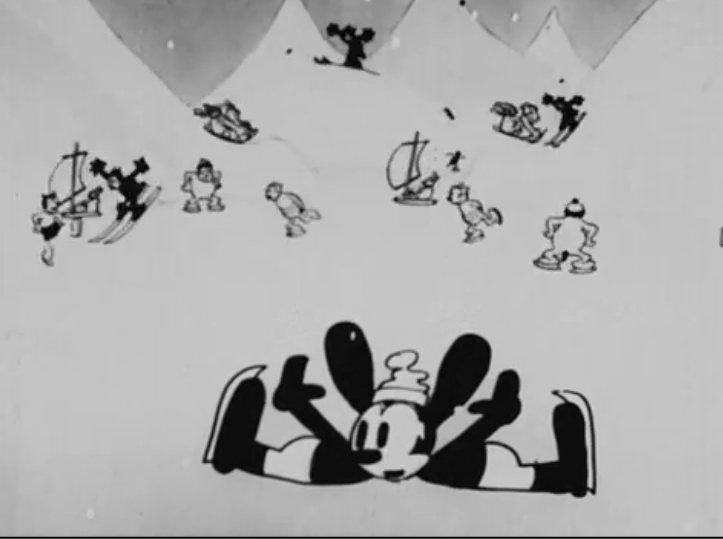 About Derek McCaw 2011 Articles
In addition to running Fanboy Planet, Derek has written for ActionAce, Daily Radar, Once Upon A Dime, and The Wave. He has contributed stories to Arcana Comics (The Greatest American Hero) and Monsterverse Comics (Bela Lugosi's Tales from the Grave). He has performed with ComedySportz and Silicon Valley Shakespeare, though relocated to Hollywood to... work in an office? If you ever played Eric's Ultimate Solitaire on the Macintosh, it was Derek's voice as The Weasel that urged you to play longer. You can buy his book "I Was Flesh Gordon" on the Amazon link at the right. Email him at editor@fanboyplanet.com.