I’m using that announcement to talk about the book itself. Written by Joshua Williamson with art by Jorge Coelho, The Haunted Mansion had a road ahead of it both seemingly simple and tough. It’s one of the Disney resorts’ most popular attractions, with versions in almost every location. Unlike the earlier titles in the Disney Kingdoms line, it’s one that already has a built-in popular mythos, with elements that fans have sometimes decided upon for themselves. (I highly recommend Jason Surrell’s recently published history of the attraction — though if you’re a fan of the Haunted Mansion, you’ve probably already read it.)

Though I’ll be very interested if and when Marvel takes on Pirates of the Caribbean, it’s no wonder they haven’t tried to approach it — thanks to the movies, the publisher won’t have a lot of freedom to create something truly new as they have with Big Thunder Mountain Railroad or Figment. In the vein of being free from expectation, the strongest and best Disney Kingdoms book was the first — Seekers of the Weird, because it was based on an attraction never actually built. Disney Imagineer Rolly Crump’s unrealized Museum of the Weird would have been adjunct to… the Haunted Mansion.

Williamson’s take has not itself connected to that earlier title any way but spiritually (which is appropriate). Like the family films that Disney produced in the 1960s and 1970s, the story centers on a young teen who feels a little lost. The one person who understood him, his grandfather, passed away, calling for help from beyond the grave. There’s this creepy old mansion full of ghosts, and the most powerful of the ghosts, the Captain, holds all the others prisoner. 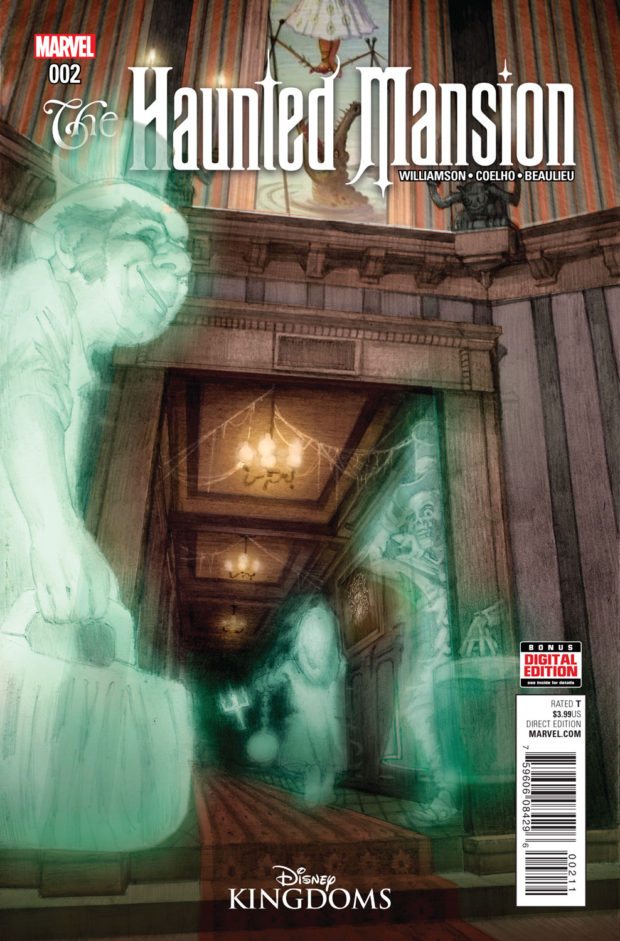 The second issue, which Marvel is reprinting in May, focuses on an iconic setting from the attraction — the ballroom. A great party of ghosts celebrates eternally, partially because they have no choice, and also because the effect of the mansion (or the Captain’s curse) is to fog their memories. Even if they try to escape, they may forget they’re trying halfway through the attempt. It’s a sly chapter, balancing the menace of what is after all a ghost story with a liberal dose of good humor. That’s also why people love the actual Haunted Mansion.

Coelho’s art fits the book well. It’s cartoony and intricate, full of emotion. Like the Haunted Mansion itself, it conveys menace when it has to. It’s just not quite on model with the more iconic look of Marc Davis’ original designs for the attraction — and that’s okay. When SLG had the comics license for the Haunted Mansion, that publisher went full-on indie with the art, and it made for a fun book then. (That was an anthology — with the intention of telling 999 separate stories about the 999 ghosts.)

It’s clear that Williamson and Coelho are hardcore fans; this book is steeped in affection for the Disney legacy, and though “the Captain” has recently made a much more affable appearance at the Disneyland Resort, a much darker version of the character was the original impetus for the attraction way back in the 1950s. (Thanks, Mr. Surrell.) It also works well as a kids’ adventure book — just enough hot and cold running chills to make it suspenseful and a fun read.

The world famous attraction returns to haunt comic shops once more! Marvel is pleased to announce that HAUNTED MANSION #2 has sold out at the distributor level (though copies may still be available at retail) and will immediately return for a second printing! The newest series in the Disney Kingdoms line brings the 999 happy haunts of the Haunted Mansion to (after)life like never before. Rising star creators Joshua Williamson and Jorge Coelho throw open the doors of the mansion and take you, dear reader, on a spine-tingling tour you won’t want to miss. Don’t believe us? The critics are already dying for this comic!

“Williamson, Coelho and Beaulieu really pulled out all the stops to create a horror comic that could appeal to all ages while capturing the wonder and awe of the attraction itself.” – Multiversity Comics

“The moment I reached the end of the story, I just wanted to know more and can’t wait for the next issue.” – DisKingdom.com

Don’t miss your chance to see what has everyone talking and why THE HAUNTED MANSION is perfect for Marvel and Disney fans alike. Now is the time to jump on board and snag a copy when HAUNTED MANSION #2 returns to comic shops this May!

Plus – don’t miss out on an exclusive Disney Parks variant covers to Haunted Mansion #1 and Haunted Mansion #2 – available at Disneyland’s Pieces of Eight and Memento Mori in Walt Disney World! 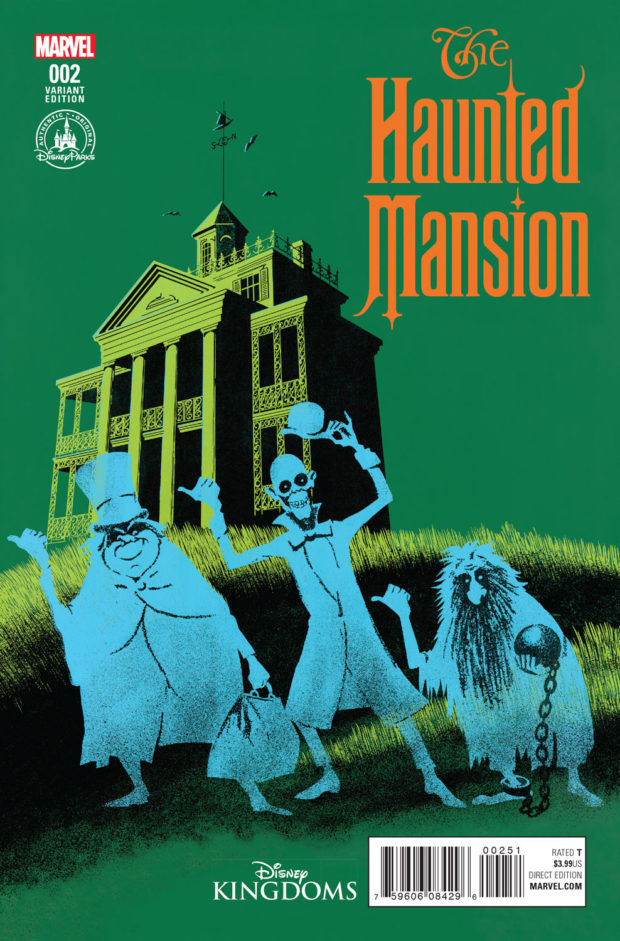