I’ve always had a soft spot for the Sontarans. Invented by Robert Holmes, one of the most revered classic series writers, they were intelligent, articulate warriors so dedicated to courage in battle that they left their Achilles heel, the probic vent on the back of their necks, unprotected. A moderate blow to the vent incapacitates a Sontaran, but for such a blow to land, the Sontaran must either be off-guard or fleeing the battle. In their weakest story, the Sontarans successfully invaded Gallifrey. If any race from the classic series deserved to be fleshed out and retconned with a reputation for being noble-yet-ruthless warlords, it was these guys…or so I used to think. I’ve come to terms with the wisdom of anointing the Ice Warriors instead, for three reasons: one, the Sontaran ship had sailed by series 4 of New Who and they were irredeemable jokes by the first “Sontar ha!”; two, there was already precedent for honor among the Ice Warriors thanks to 1972’s “The Curse of Peladon”; three, appearance-wise the Sontarans are inescapably a race of Mr. Potato Heads, and the Ice Warriors, thanks to their makeover circa “Cold War,” look fantastic.

They even look fantastic after a 5000-year nap, which is one of the pros of being a reptile, I guess. Ice Warriors are big on naps; of their six stories to date, this is the third instigated by humans thawing them out and waking them up from hibernation. In terms of human chronology, it’s the earliest, and we have to imagine that when Mark Gatiss pitched this one, that must have figured heavily in its acceptance. “Okay, yes, it’s another Ice Warrior story where the Ice Warriors and the humans nearly end up in a war with each other and then back off at the last minute showing mercy and honor,” he probably admitted, “but this time, instead of Russian sailors in a sub, it’s Victorian soldiers on Mars. And there’s a queen!” 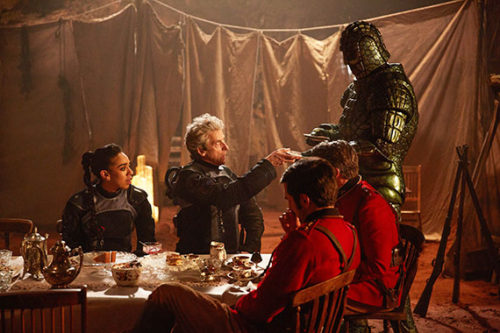 The juxtaposition is the sort of incongruous mash-up that only Doctor Who can really do, which would be justification enough, but it also makes a certain amount of sense. The soldiers don’t know it, but they’re only about 30 years away from the end of the so-called “imperial century” and the beginning of World War I. The Ice Warriors don’t know it, but their planet as they knew it is dead and the titular Empress must soon lead her people out of an era of imperial dominance into an era of intergalactic cooperation (starting with the civilization of Alpha Centauri, whose excitable representative also appeared in 1972’s “The Curse of Peladon” and is played here by the same actor). Thematically, the episode coheres.

Dramatically, it’s a little less successful. It suffers from some of the same issues that plagued “Cold War,” including a large cast of cannon fodder who have only moments to impress themselves on our memory before they’re killed off. (The “crumpleizer” weapons are new. Traditionally Ice Warrior guns are sonic disruptors, but there’s no denying that these upgrades are more visually interesting.) Some of the scenes (e.g. the tea service) seem oddly paced and lacking in energy, and Catchlove’s performance in particular is full of strange line readings. Meanwhile, the Empress is all bombast, chewing the scenery in classic Who villain fashion, though it’s hard to imagine a reading of “Rise, my Ice Warriors, rise!” that could ever be taken seriously, even without a mouthful of vicious sharp teeth. And once you get past the basic premise of the episode, there really just isn’t much to it: some soldiers are brave, some are greedy. One is a coward who redeems himself, and the Ice Warriors are green men and women from Mars. The end. 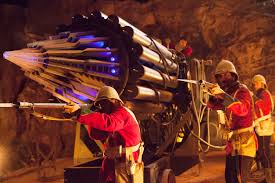 The Doctor and Bill get very little to do, and arguably don’t impact the plot in any significant way. The Doctor spends most of it pleading “don’t do this, let’s talk this out,” and is only briefly listened to. Since for some reason the humans and Ice Warriors can understand each other (sure, sure, the TARDIS and its telepathic circuits, but then how were the soldiers speaking to Friday before? and why does it work even though the TARDIS flies off with Nardole?) there’s no reason the failed negotiations couldn’t have happened anyway. Then there’s the understanding the Empress and Bill have over their gender, which could have been an interesting wrinkle if Bill’s perspective had actually been different from anyone else’s in this case. And there’s not much about the chat the Doctor, Bill, and the Colonel have in the brig (why did they build a brig, anyway? what prisoners did they expect to take?) that seems to influence the Colonel’s final course of action. In a season when the strongest moments have turned on incredible performances from Capaldi and Mackie, sidelining them from the plot seems an unusually damaging mistake. 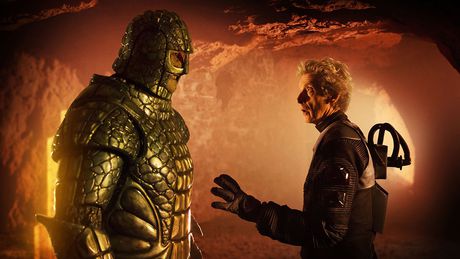 Still, it’s not an unpleasant way to spend 43ish minutes, including the cryptic coda in which Missy appears to have sincerely helped Nardole fix a mysterious TARDIS fault (hands up if you don’t think she caused it) and seems to be genuinely concerned for the Doctor’s well-being. Michelle Gomez, at least, still gets an opportunity to steal the show in the space of maybe four or five lines total, making it all the more tantalizing that one more episode still separates us from her upcoming two-part finale. Fortunately, that one more episode, by the author of the very last episode ever of classic Who, looks like it might worth pushing the Missypocalypse out one more week.